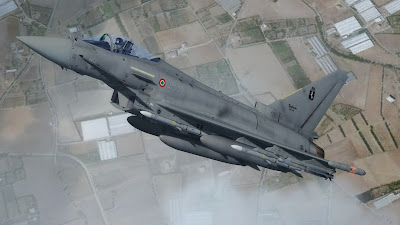 ***IMPORTANT!***
I forgot to "sign" the Tacpack files for multiplayer anti-cheating in the1.05-1.06 update to the Eurofighter... as result, if the server has anti-cheat enabled, you will be kicked out of the session. Please download the signed files (that must go into the main Eurofighter folder) from the side bar, if you want to use the updated Typhoon in multiplayer. Sorry for the inconvenience.

A rainy Sunday is a good day for some "housekeeping" of my projects... so I have released a small update to the Eurofighter project which hopefully solves some of the problems detected in these first two weeks of deployment. There are still some issues to be solved, but given that my time for the Eurofighter in the next few weeks will be very limited, I decided to release it today.

You should receive an email notification from your distributor of choice that the installer has been updated to version 1.05. This is a full install that will overwrite all the existing files, so if you have installed additional repaints you may want to make a copy of your aircraft.cfg first. Changes are as follows:

2017-04-24
Product updated to version 1.06
- Fixed bug that made the elevon movement to be reversed
- Furtherly reduced excursion of canard motion

Any Chance a ATR 42-600 and the Saab 340??, is a beautiful plane but in FSX and P3D doesn't exist. That's Turboprop airliner two plane new project apply!

No, I was wrong - EVEN AFS DESIGN DID IT RIGHT! If you do not know what I am talking about: THE MOVEMENT OF THE CANARDS! THEY ARE STABILIZERS NOT ELEVATORS! THEY HAVE TO WORK AGAINST THE ELEVATOR OR THE PLANE STARTS TO SPIN IMMEDIATELY! THEY MOVE WITH THE AOA AND ONLY FOR A SECOND THEY HELP THE ELEVATOR MOVE THE NOSE UP AND DOWN! DAMN, DINO! DON'T YOU HAVE SOME BETA TESTERS WITH BRAINS? Sorry Dino, but I could not believe you would do that wrong! I am just angry!

Does this version still show as version 1.06 in the text bow below the HUD? Not a problem just reinstalled this update and not sure if i'm still on the old version or not - having a little trouble dropping ordinance in some tacpack servers that claim weapon systems are on - I have the updated Tacpack sig and I don't get kicked from the game, just can't release bombs or fire missiles (guns only) this happens in two different tacpack enabled sessions (MS.net Tacpack server and Central Airways tacpack server)