SORRY FOR THE LACK OF UPDATES - DUE MY PERSONAL TIME CONSTRAINTS, BETA 1 HAS NOT BEEN AS EXTENSIVE AS I WISHED IT TO BE, NOR DID I HAVE TIME TO UPDATE THE BLOG PROPERLY.
I WILL MAKE A NEW POST WITH ALL THE CHANGES DONE IN THE PAST FEW WEEKS.

FEATURES OF THE BETA 1
***************************
This Beta 1 build includes only the F-35A, and only in USAF markings, actually depicting AF-9, one of the Low Rate Initial Production and one very first aicraft delivered to Eglin AFB.
External model is much more accurate than the previous release and should be significantly closer to the real thing. Due to a much higher polycount, I've decided to remove some eye-candies such as "Remove before flight" ribbons and wheelchocks. It is possible, however, that the new visual model may impact the fps.
The VC has been optimized in several areas, and sports minor functional improvements, texture refinements and details.
No changes to the flight model - which has been extensively tested though in the previous releases - and IMHo mimics the behaviour of a fly-by-wire quite well in many areas of the envelope. 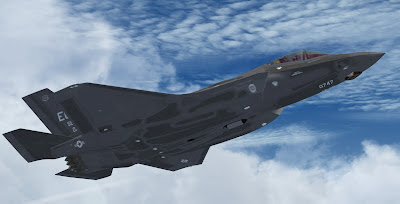 Thanks a lot for you interest in the F-35 Beta - I've already received dozens of applications, much more than the ones I need and definitely more than what I can handle.
I am closing the selection today - download links to the selected testers will be sent most probably during the weekend.
Posted by ScimmiaSpaziale at 12:02 PM 1 comment: 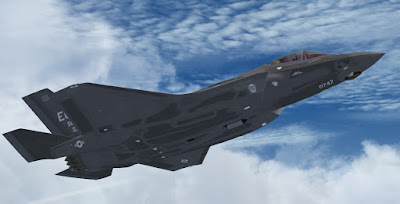 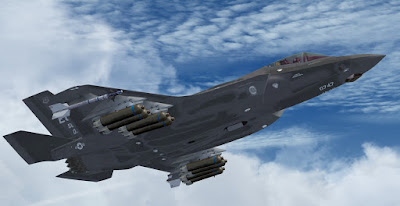 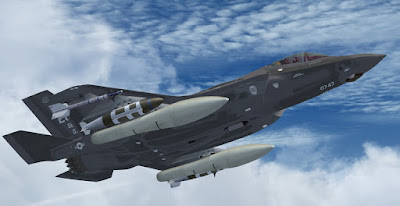 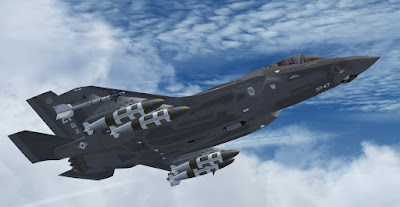 Well, I finally have a build that I consider good enough for Beta 1. Actually I think it should be better than that, as the flight model is the same as the previous version and it was working fine...and most of the VC is the same, apart from some minor graphical tweak.
So, Beta 1 is ready for testing. Beta 1 will ONLY feature the F-35A, the CTOL version. F-35B is in the works, but it experiencing some delay as my real life job is consuming most of my time and energy lately. F-35C is also in the works, but, for technical reasons, it is much better to have the -A and -B ready before moving to the -C.
Should you want to apply for the Beta testing, please drop me an email at indiafoxtecho (gmail) com, which, from now on, will be my main address for simulation related email. Please add a F-35A Beta in the subject (or anything that will help me sorting them out) and a brief description of your systems and main add-ons...and which kind of simmer you are, if you wish so - keep it short - I just want to better understand your perspective and -in case- suggestions.
Also, due to my time constraints, I will not accept many testers - it will be impossible for me to collect a large amount of information. There will not be a particular rule to chose the testers - I will mainly pick different systems/simmer "types" combination...just to have varied feedback. Should you not be picked - well, I am sorry - I just cannot accept more than few testers.
Also, to report bugs, please use ONLY the methods described in the email. Thanks you all in advance!
Posted by ScimmiaSpaziale at 11:56 PM 2 comments: 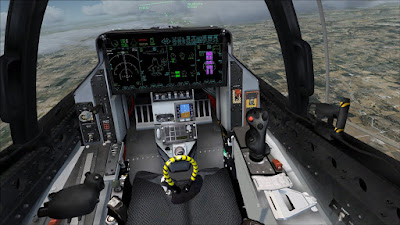 Above is the "new" cockpit...as you can see it is mostly the same as the previous version. There are some subtle changes to the textures, minor geometry fix and some optimizations here and there. 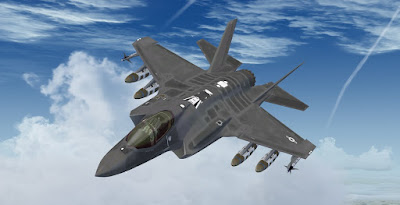 Here is a picture of the "final" -A model. The new 3D model is much more accurate...but less efficient in terms of frame rates. Models with external loads are, of course, "heavier" in terms of geometry, so users with slower systems should see a better performance without external loads. 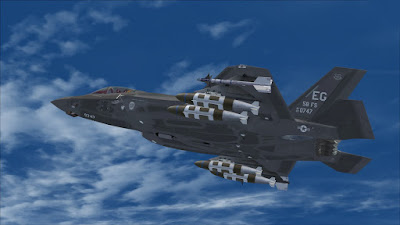 Another shot of the new F-35A model

I think the F-35A is ready for Beta testing. Hopefully, during the next weekend I should be able to compile the versions with the various loadouts. I will post the instructions on how to apply to for the Beta once they are ready.
Posted by ScimmiaSpaziale at 2:55 AM 1 comment: