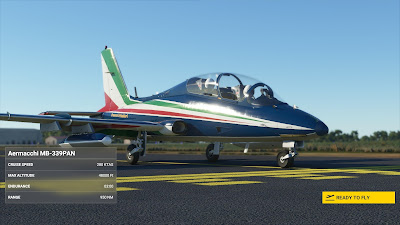 Beta test is open to testers of all different skill levels and expertise.
In order to apply for the Beta Test, please drop an email to indiafoxtecho@gmail.com with the following information:
- System specification (no need of details or long explainations: just specify your CPU, Clock speed, RAM, GPU and dedicated video RAM)
- Real world flight experience (if any) - please keep it short!
- Simulation experience - please keep it short!
- Any special tie to the MB-339 or any reason why you really want to test this plane

Important! Subject of the email must be "MB339 MSFS Beta Test Application".

Please do not apply unless you have 4-5 hours to dedicate to test this aircraft!
Testing this aircraft is NOT a paid position in any way...if you do it, you do it only for the fun of it!

...and, due to the large number of applications we typically receive, we cannot grant a reply to everybody. If you do not receive a reply in a week or so, please assume you have not been admitted to the Beta - apologies in advance!
DESIGN INTENT:

This is a medium complexity add-on which is meant to depict the Aermacchi MB-339 of the Frecce Tricolori in a detailed but accessible way. The key points of the package are as follows:
- Focus of the simulation is the Aermacchi MB-339PAN/MLU version. Visual variant for MB-339A/MLU is also provided
- Highly detailed external and internal model
- Flight model and systems simulation is based on default MSFS functionalities (no external code)
- Simple sound package

The plane is intended for basic military jet training, formation flying and aerobatics.

The preferred way to report bugs is to add a comment to this post, specifying what is the experienced malfunction and when it happens. Pics are welcome.
PLEASE do not rush in reporting bugs - it is not a race - take your time and verify if it is a real problem and, if you think it is, try to understand when it happens exactly.
Alternatively, an email is good to. Comments are preferred so that other users can see them.
It is not a race, so take your time. The simulation is quite complex, so it may take some time to get acquainted with the plane… I'd suggest you log at least a couple of hours before submitting any feedback.
Also, PLEASE, before posting a bug make sure it is not already in the list below.

There are two external models in the package. The star of the show, and default selection, is the MB-339PAN/MLU with standard loadout for the Frecce Tricolori Airshow. As visual alternative, a model for MB-339A (non MLU) with elliptical tiptanks is also provided. Externally MLU and non-MLU differ mostly for the fact that MLU has formation lights and some of the antennas are in different positions.
The two external models are separate files and should be tested separately - if you find a problem, please check if it is present in one or both models.
MB339EXT001 - Better heat blur effect - slightly improved in Beta 2 (still somewhat small, but now aligned to the aircraft direction)...
MB339EXT002 - Missing Ice Blast effect - added ice blast effect
MB339EXT003 - Check beacon light on fuselage (visible only from below)? - FIXED in Beta 2
MB339EXT004 - Flood lights peek slightly through external views... FIXED in Beta 2
MB339EXT005 - Missing Landing Light animation from external model... FIXED in Beta 2

As for the external model, two separate virtual cockpit models are included: PAN and A versions. Unlike the external models, both internal models include MLU changes. The PAN version differs from the A version since it lacks the gunsight but has smoke indicators and smoke control panel.

FLIGHT MODEL:
The flight model has been tuned to mimic the performance of the MB-339PAN with airshow loadout. In this configuration the aircraft is somewhat slower than what most people think - achieving 350-370 knots maxium depeding on different factors.
The fuel capacity is limited to internal tanks only, irrespective of the external model.
NOTE: The aircraft should be able to fly all the formation maneuovres of the Frecce Tricolori programme, but is currently unable to replicate some parts of the solo programme.

Due to MSFS limitations, the smoke system is NOT WORKING - although controls in the cockpit do work.
The sound system is using FSX legacy mode - hence some sound effects (e.g.rain sounds) are NOT supported.

Posted by ScimmiaSpaziale at 2:20 AM 69 comments: