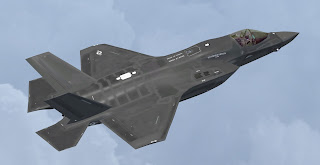 VERY PRELIMINARY image of the F-35B model - textures are WIP 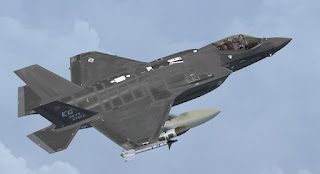 ...and this is the F-35A "Release Candidate" model

Despite of what I wrote in the previous post, I made some other modifications (hopefully enhancements) to the F-35A model, the most important being that I switched to a "modeled" afterburner effect. Some people may not like it, but its rendering is more consistent through different video cards and drivers - the major drawback is that it increases the virtual "size" of the visual model, so that default views are slightly farther away. I also refined some aspects of the main textures and I am quite happy with it.

...so I've finally switched to the F-35B. Above is the very first image, texturing needs a lot of work but looks promising, and the many areas of the model need some work. But, so far, I think it does not look bad IMHO.
﻿
Posted by ScimmiaSpaziale at 1:48 AM 4 comments: 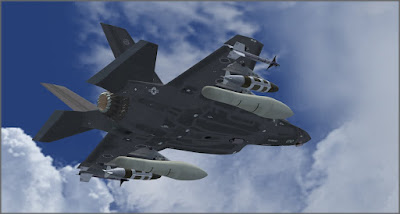 I've finally found the time to complete (most of) the changes and improvements in response to the Beta 1 feedback. I will now move to the F-35B.

Posted by ScimmiaSpaziale at 12:46 AM 3 comments: