I think I have a pretty high-end system, at least for a home rig.
I have a i7 920 CPU, P6T deluxe mainboard, 4Gb 1600Mhz RAM and a Nvidia X295. It is not a cheap system. Probably not the best value-for-money around, but definitely high end.

How does FSX perform on such a rig? Badly (not much of a surprise). There are tons of benchmarks on the web, so I am not going too much into detail here. The main fact is that FSX is not designed to make full use the (awesome) computing power of the latest CPU and GPUs.

But, with such a machine, I thought it may be interesting to give Vista 64 bit a try. I will not go into the details of the test, but on my system, FSX on Vista 64 in DX10 preview mode outperforms clearly XP.
Basically, I first defragmented all the hard disks. Then switched off the computer, fired up XP, FRAPS and FSX. And measured how many fps I get, using the Sitka approach mission as a reference.

FSX was set with ALL the sliders maxed and all the options checked (bloom, scenery shadows, antialiasing, anisotropic filtering everything to the max). Screen resolution was 1366x768 (I know it is low but I use FSX on a 42" plasma TV). No other tricks/special tweaks and clean FSX installations.

As FSX is a 32 bit application I tend to believe that the performance increase was more due to the DX10 than the rest. Whatever the reason, for my system, the verdict is: Vista 64 bit + Direct X 10 largely outperforms Win XP 32 bit for Flight Simulator X.
Posted by ScimmiaSpaziale at 2:05 AM 5 comments: 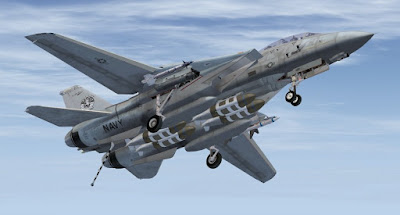 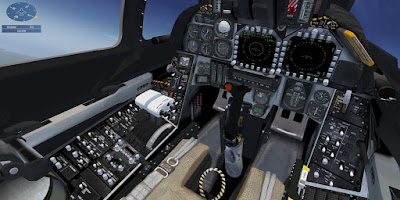 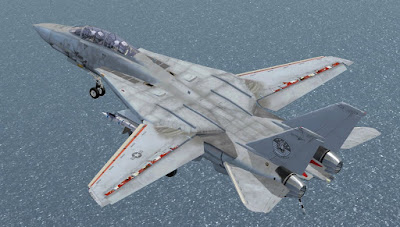 As today has been a rainy Sunday here in Genoa, I finally found the mood to make some significant progress with the Tomcat. "Significant progress" means that finally the left console is textured and most of the switches have been modelled. Main instuments are functional, and so are the MFDs and the HUD. Let's say the cockpit is 80-85% complete. I just need to make the rivets and bolts of the canopy, put some screws and switches here and there, make the advisory lights and assign the animations/mouse rectangles. Two/three hours and it will be done.
I've also tweaked the textures of the outer model - now they are more color-consistent and slighly more defined. The burner effect has been furtherly revised, too.
Bad news come from the extenisve carrier trials I did today... while the flight model is generally OK, the plane sinks too much below 150-160kts forcing the pilot to keep an attitude that makes almost impossible to see the deck though the HUD. It is possible to land, but it is extremely difficult (I mean I know it should be difficult but this is like "guess where the deck is").... I need to work on this.
As some of you are asking. the Tomcat Last Flight is currently the only paintscheme and it will be the default one. As all of the repainters seem to have "bailed out" of this project, I am not sure if I will have the time to make some other liveries myself. If I will, the ones I'd like to do are VF-213 , VF-31 and VF-101. Due the the way I places the textures "vintage" schemes (i.e. the ones with white moving surface and lower fuselage) cannot be done with this model.
...and I know that 4 JDAMs is not an allowed configuration for carrier ops!
Posted by ScimmiaSpaziale at 2:33 AM 4 comments:

Major rework of the Goshawk fuselage (and a word about quality). 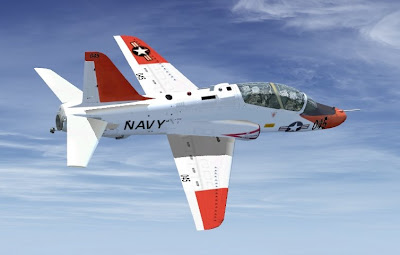 I just finished a major rework of the Goshawk geometry. 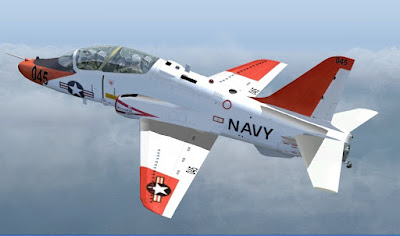 The overall dimensions are almost 100% correct now, and the model is even more accurate! 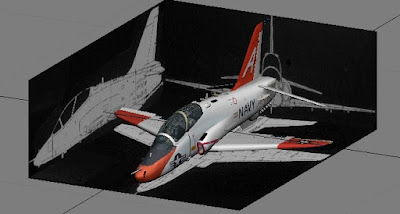 This is the "blueprint box" method I've used to check the geometry and improve it. It is a common practice in modeling, and basically consists in pasting accuate blueprints of the object onto the faces of a box. Then make the box 100% dimensionally correct and use it as reference while modeling.
As some (well very few) of you have noticed there was something "wrong" in the Goshawk... While I think it captured the "look and feel" of the real machine, some dimensions and proportions were, in fact, inaccurate. This was not done intentionally, but it was a sort of "error propagation" that sometimes happen when some "artistic" touch is applied to what is, basically, an cold automatic process.
While I like adding some artistic touch here and there (I think it helps making the thing more "striking") I simply could not stand the fact that, from some angles, the Goshawk did not look quite right. So, I took it back in the modeling hangar and made a major rework, checking it towards a 100% accurate "blueprint box".
It turns out that there were several areas that could be improved. I knew that the model was longer and taller by roughly 30cm... but the inaccuracies affected the general shape much more than I tought. In detail:
- fuselage "slope" towards the tail was wrong, and, in general, it was too "rounded"
- the tail itself was too big, and too "straight"
- the stabilizers were too wide, and the shape was incorrect
- the air intakes were slightly too small
- the hook "support" was slightly too big, while the hook itself was a little "stubby"
After 4.5 hours of tweaking the result is that now the dimensional error is less than 1%... and the model looks better.
Now my two cents on freeware "quality"... I recently saw a post in a forum that was complaining about the Goshawk geometric accuracy - the message was like "well I don't think is good, but as it is freeware I think it is OK". There were two things I did not understand:
1) why the authour did not drop me an email. I am adult - I can take the criticism: I think criticism can help me making better models. And it will not spoil the fun I have in making them and flying them. I may agree with a comment or not....but ultimately let's call this whole thing for what it is: A VIDEOGAME. Nothing more. Don't be afraid of commenting my work.
2) Much more important: I cannot understand the logic for which if it is freeware then the "quality bar" is lower. Sure, professional payware has, on the average, a quality level that is impossible to reach for freeware - which lacks the resources that payware can afford to employ. But on the other hand, in freeware you can develop interesting models that have little or no commecial value. And it is basically the only way in which you can have unusual planes or scenery. There are some amazing freeware addons out there. I think I will be reviewing some in this blog sooner or later. The fact that a project is freeware, to me, does should not be a reason not to try to deliver the best possible software. I like trying to do the best I can for the sake of doing it. And ultimately, it is just a videogame so...when I am not having fun I can quit.
End of this big post. The new Goshawk will be released as soon as I finish improving the rest of the package. Tomcat fans: do not panic. The big cat is still coming and is sharpening its claws for the Beta. Maybe next week - depending on the wheather: good weather here means Tomcat delay :-)
Posted by ScimmiaSpaziale at 11:45 PM 6 comments: