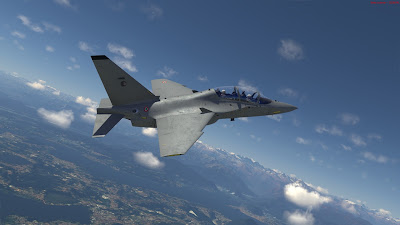 IMPORTANT! All Beta test slots have been assigned. NO NEW APPLICATIONS WILL BE ACCEPTED.

BETA 1 of the Aermacchi M-346 Project is finally here! The build is not really feature complete but it is completely flyable and ready for test.

To apply as a Beta tester for this project, please send me and email at indiafoxtecho@gmail.com with the following information:
- Real world and simulation experience (Note - Beta is open to ALL levels of experience...I ask the question just to know what is your level of aeronautical knowledge)
- Your system CPU, GPU, RAM and OS
- The simulator you intend to test the M-346 on (exact version of P3D, and if it is with or without VRSTP)
- Any special reason why you think you should get the Beta (be honest, no flattery please)

The subject of the email shall be: M-346 Beta Test Application

Please DO NOT apply if you do not think you have the time to test it (consider 3-4 hours minimum).
Also, just to make it clear, this is NOT a paid position - in any form. I will decide to provide or not complimentary copies to testers at the end of the Beta stage.

The package embraces the "Add-on" approach available in P3Dv4 or v5 - therefore package shall be installed in your Prepar3D Add-ons folder in your Documents folder.

A WIP manual that includes operational checklists is available for download by clickling HERE. The checklists are close to the real world one, but have been (partially) amended to reflect changes in the simulation. Testers are encouraged to go through the checklists and report discrepancies.

The aicraft embraces a COLD AND DARK approach.
If you start your scenario on the ground, the aircraft will shut down all its systems forcing you to a full start.
While you are encouraged to follow the checklist and report any major inconsistency, AT MINIMUM, to start the aircraft you must follow these steps:

- APU START PUSHBUTTON ->  PUSH (the caption becomes RUN and blinks, indicating that the APU is starting up...when the blinking stops the APU is running)

- RIGHT ENGINE START -> PUSH (the button starts to blink, when the blinking stops it means that the engine is running and APU can be turned off).

NOTE: To arm the ejection seats, you must remove the safety pin AND set the arm switch to ARM. The procedure must be repeated for both seats, unless the ejection sequence lever in the backseat has been set for solo flight.

NOTE: Checklist would request you to perform the EGI Alignment procedure...which is however entirely optional. Despite the IN/GPS page readings, navigation accuracy is not affected by the procedure, which has been included only for users who want to perform it.

WHAT IS *NOT* INCLUDED IN THE BETA:

The aircraft is fully flyable and should not have glaring omissions. However, at present, the following features are missing or incomplete.
- Electronic Warfare (note: in the real world, the vanilla and the FT versions do not have it...addition is planned for the FA version)
- HMD support (still TBD)
- Special Alert system
- Voice alert system (it's in there...but needs improvement)
- UFCP steering point, waypoint and flight plan management
- Pre-Planned A/S Targeting
- Targeting Pod

M346VC87 - Redone GHD Display to comply with the flight manual
M346VC88 - Master Caution does not flash in reality
M346VC89 - MENU pages are completely black and do not overlay on existing graphics.
M346VC90 - A/A and A/G modes are not selectable when Gear Down and WOW - Fixed
M346VC91 - Request to make REAL/SIM switch functional

M346FM18 - Basic empty weight does not include oil and hyraulic fuel. Should be 5300 - FIXED
M346FM19 - Change avionic reference speeds with EAS. - IMPLEMENTED

Posted by ScimmiaSpaziale at 1:29 AM 21 comments: 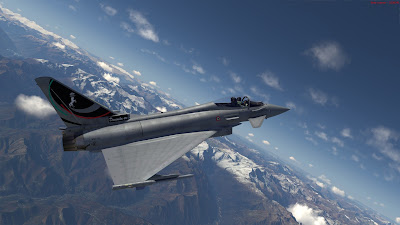 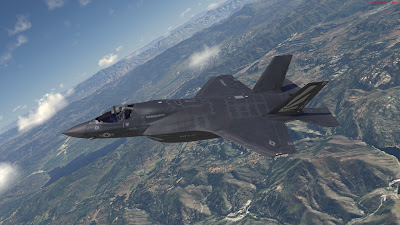 IMPORTANT: the new installer embraces the "ADD-ON" approach of Prepar3D, that is the files of the add-on are NOT placed in the simulator folders, but rather are stored in a separate addo-on folder.
The default location of this add-on folder is \Documents\Prepar3D v5 Add-ons - this is where you should point your installer to.
All add-ons in this folder will be discovered automatically by the simulator and can be switched on and off at will.

PREPAR3D V4 USERS: despite its label, the new installer will also work with Prepar3D v4 and some users may prefer to use it as it also installs all the patches. You can do that, but, if you have previous versions of the F-35 installer, before doing that you should MANUALLY DELETE the F-35A, F-35B and F-35C folders in your SimObjects\Airplanes folder

SimMarket customer should have received an email notification. All the other major distributors of the F-35 are now out of business: if you were one of their customers and wish to receive the new installer drop me an email at indiafoxtecho@gmail.com with proof of purchase and (if you have one) your SimMarket account references (at it may be easier for me to provide a download link through their servers).

NOTE - IN MY INTENTIONS, THIS IS THE FINAL UPGRADE OF THE VERSION 3.00 F-35. I AM WORKING TO SEE IF IT IS POSSIBLE TO BRING THE F-35 TO THE NEW MICROSOFT FLIGHT SIMULATOR.
Posted by ScimmiaSpaziale at 5:32 AM 9 comments: