Last call to download the Beta - and CoNA repaints! 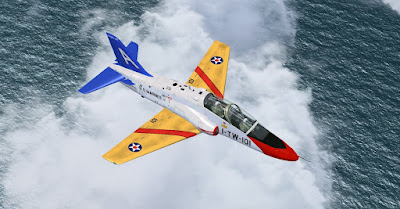 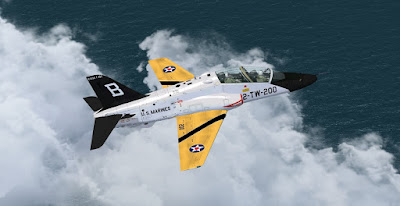 This post is "last call" for anyone who may want to give a try to the Beta release. I will delete the download link tomorrow morning (European time) as that build is no more representative of the status of the project.
Aside here are two preview pictures of the Centennial of Naval Aviation retro schemes. I would like to do also the two special colors done by TW-2 recently, but I am not sure I will have the time.
Anyway, I'm (slowly) getting rid of as many bugs as I can - but I took the chance and rationalized the coding of some areas of the cockpit, which may ease, in future, the addition of new functionalities. In fact, some unplanned functions are already in place (like a more accurate operation of the launch bar lights).
Most of the recurrent complaints have been addressed, like the cockpit night lighting which has been completely redone (and looks quite good IMHO). Also, the flight model has been tweaked a little - and carrier landing paramters should be closer to the real thing (although I think that carrier landings will be slightly harder for most users).
Last but not least, Neutrino is customizing the HUD so that it will be much more accurate.
Should everything go as planned, the new release will be ready by the end of the month.
Posted by ScimmiaSpaziale at 12:26 AM 5 comments: 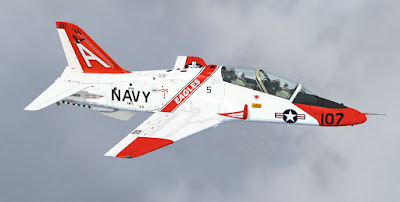 This post is meant to be a repository and progress tracker for the public Beta Version of the new T-45C Goshawk for Flight Simulator X. The Beta dowload link can be found in the previous post of this blog, that is here:

Please report bugs, issues and suggestions from the Beta release as comments to this post. I will update this post once in a while but I will review it almost daily for the next two-three weeks. The plan is to release the new Goshawk by the end of June.

1) Main landing gear doors shape is inaccurate. The drawings I've used to cut the polygons were inaccurate in that area. STATUS: CLOSED. ACTION:None. The changes require to the 3D model would require too much time.

2) Aircraft is sitting too high on the ground. STATUS: OPEN. ACTION: TBD. The model previously was previously sitting much lower, but gear dynamics / animation had issues. Correct setting seem to work much better. Unsure to change it or not.

3) Evaluate addition of external loads. STATUS: open. ACTION: try to merge external loads from previous model and see how it looks and evaluate impact on frame rate. This is not a priority for me, but it would be a nice- to-have feature for some.

Bomb racks & baggage pod: it would be possible to reimport them from the old T-45C model. Visibility can be mapped to load stations or doors.

NEXT IN THE LINE:
TBD

1) HUD parallax effect is buggy (sometimes does not return into its proper position). STATUS: CLOSED (FIXED - removed unnecessary animation of the view cone).

2) HUD missing "E" bracket. STATUS: CLOSED. ACTION: None. This project reuses standard MFDs and HUDs from stock Hornet. It may be possible to install the enhanced HUD from Neutrino and Scott Prinz as a third party add-on.

NOTE: Report from Neutrino shows that the view cone and projection plane should be change to properly apply the improved HUD -> I will modify the drawing accordingly.

UPDATE: First integration with new HUD from Neutrino was positive - and it looks really good!

3) MFDs bugs. STATUS: CLOSED. ACTION: None. Default MFDs from the stock Hornet seem to have issues with the Goshawk. MFD code should be redone from scratch, but I have no time for that and most of the pages and functions work correctly.

9) VVI needle not sitting at zero when it should. STATUS: CLOSED. ACTION: Fixed animation in 3d model, also got rid of a bug that made readings not accurate in certain conditions.

15) Reprogramming of all warning/advisory lights ongoing. STATUS: OPEN. ACTION: reprogram all the .xml code for the warning and advisory lights for more accurate functionality.

16) Add more conditions to the red/light launch bar light. STATUS: CLOSED: Green light turns off when N2 is above 95% (to achieve a "no lights" condition before launch as in real life) and red light turns on when launch bar is not retracted and plane is airborne.

17) BINGO values can be set correctly and are digested by the system, but they are not integrated in the Caution/warning lights. STATUS: OPEN. Action: edit .xml coding.

18) LAW value can be set correctly but shows only in the mouse information tag. STATUS: OPEN. Action: evaluate integration in the altimeter.

1) Catapult endspeed is way too high (above 200 kts). This is due to the fact that the Goshawk uses default catapult dynamics, which are set for the F/A-18 Hornet and cannot be changed (but can be overwritten by additional code). STATUS: CLOSED. ACTION:None from my side. This cannot be fixed without additional code - Sylvain will provide a standalone fix for this.

2) Approach speed and settings: monitor user feedback - IMHO the landing behaviour is.good (but not perfect) and does its carrier-training job quite nicely. STATUS: CLOSED. Vast majority of users is happy with the carrier landing behaviour, however it has been modified for more accurate AoA and speeds (most user will probably find that it is more difficult).

3) Engine settings at idle: engine idle should be around 55+/-2 %, also idle speed should not be able to move the a/c on the ground. STATUS: CLOSED (fixed engine dynamics and gauges animation).

4) Evaluation of several fixes/improvements to the flight model. Most users seem to have no issue with that - carrier landings are close and easy to do but not perfect. I am currently evaluating some changes - I know the flight model is far from being perfect, but I have too confess that I consider the current one to be quite good... hence, I will evaluate each and every change carefully. Flight models are sometimes tricky: you fix one aspect and do not realize you are screwing up others... STATUS: OPEN - ACTION: MONITOR

5) In general, flight emergencies are not managed correctly. STATUS: OPEN - ACTION: See if there is time for better emergency systems modeling - however, proper simulation of emergency procedures is beyond the scope of this project.

6) Landing gear damage threshold is low. Some users experienced damages to the landing gear while landing. The damage threshold was lowered on purpose to force users to perform smotther landings but, with new dynamics and more accurate AoA during descent, it is extremely easy to damage the gear. STATUS: CLOSED Gear stiffness increased to the same values of the old T-45.
MISCELLANEOUS & OTHER:

2) One user reported "click" sounds on the sound package. Cannot replicate that issue. STATUS: CLOSED. ACTION: none - I think the sound pack is quite good, although I am not an expert in this field. Much better than any default alias.

Color key:
Green - issue solved, or mitigated to the point is acceptable or not perceived by most users. Or a minor issue that will be present in the final build as it would require way too much work to be fixed, and does not spoil the general quality of the project.
Yellow -issue open, and could be perceived as product defect by many users. Awaiting action or investigation. Or issue open, mitigated to the best of my knowledge but will still be perceived as defect by users. Or issue open but appears easy to fix.
Red - major issue for most user that needs to be solved before release, or an issue with a root cause not identified as of today. Or the problem is beyond my knowledge or impossible or too difficult to solve.
Posted by ScimmiaSpaziale at 1:31 AM 51 comments: 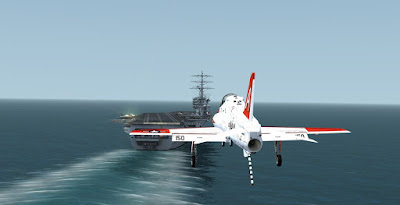 The Beta build of the T-45 is ready (and it will be an open Beta), but I have decided to delay its release for a day or two as I am compiling its flight manual. It will be an 80 pages flight manual based on the first 8 chapters of the real T-45C NATOPS - and it will closely replicate its structure and its contents, with clear indication of the differences between the real and the virtual Goshawk. It will cover general information, systems descriptions, operating limitations, standard and special procedures and flight characteristics - but will not cover emergency procedures, all-weather operations, communication & navigation equipment and procedures and weapon systems. It is almost ready - just few more hours of work and its done...
Posted by ScimmiaSpaziale at 12:39 AM 4 comments: