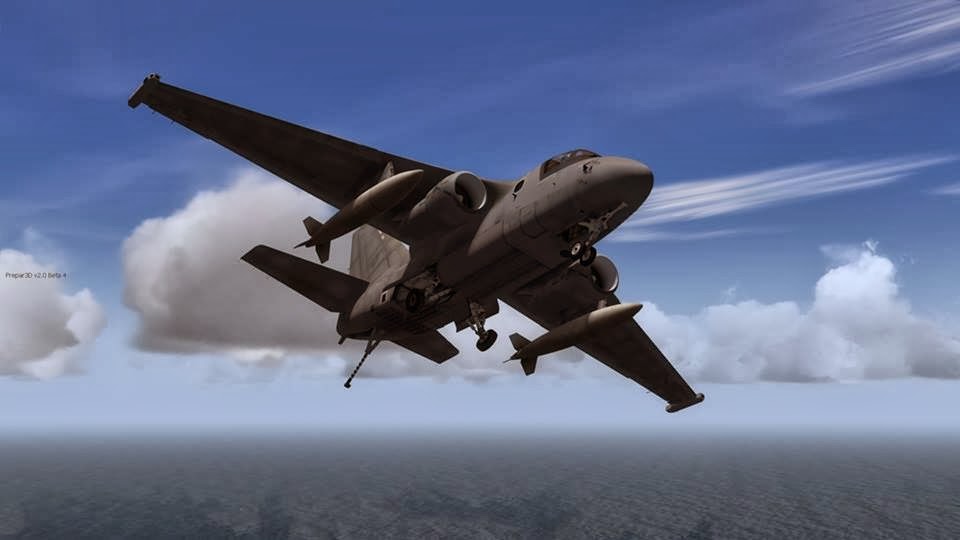 A very quick update on the status of the various projects I am working on...
As you know, it is extremely difficult for me to find the time to work so many projects, which are getting more and more complex and time consuming.
At the moment all the new projects (S-3 and MB.326) are being developed as freeware - but given the effort needed for those projects I cannot rule out a switch to payware. For the moment it is just an option... but it is being evaluated seriously.

Lockeed S-3B Viking
At the moment, this is the highest priority and I am (slowly) working on the Virtual Cockpit geometry and textures. The preliminary work was not completely satisfactory, so I have restarted it from scratch. It will take a couple of months before it is complete... so a Beta version may be released around Easter, hopefully.
An almost complete AI Tanker version is also in the works, and I am considering to release it separately.

Boeing T-45C Goshawk
I am working on few small improvements and I have made some minor tweaks to the Virtual Cockpit... no high priority changes at the moment.

Lockheed Martin F-35 Lightning II
I am still collecting feedback from the latest build, although, apparently, there are no major issues that need immediate action. There are few unrleased enhancements I'd like to share with you and I will do that as soon as possible.

Grumman F-14D TomcatAlso for the big cat I have been collecting feedback from the latest build - which is far from being perfect but, at least, seems free from major problems. Once I have reached a "critical mass" of fixes/improvements I will release a further update.

Aermacchi MB.326
After some preliminary (and quite promising) work, driven by the enthusiasm of flying on the real thing, I have put this project on hold in order to try to complete the Viking.

As usual, suggestions are welcome.
Posted by ScimmiaSpaziale at 12:29 PM 15 comments: 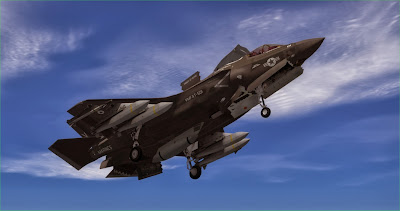 Yet another major bug that required an immediate fix... in version 2.36, high longitudinal acceleration made it so that the some invisible geometry required for the new HMD system made it impossible to use the MFD system (or any other mouse area)... so here we go with version 2.38.
I took the chance to implement two tweaks:
- it is now possible to disable the off-boresight graphics of the HMD by pressing Control+Shift+H (same control as the Superbug... but in this case it is ON by default)

- better, and more realistic, off-boresight logic: if IR source seen by the seeker escapes the 1.5° "search circle", lock is lost and seeker is commanded to return to the center of the HMD sight. Note that with the latest Tacpack version, the seeker position is limited by the gimbal (70° cone for the AIM-9X).

And so it is 3 versions in 2 days...what a mess! Sorry for the inconvenience!!! Change log as follows:

Aside, some of the improvements have been sent to Lockheed Martin to update the default F-35A included in P3Dv2 - they are working for version 2.05 which will fix many of the issues of the base release.
Posted by ScimmiaSpaziale at 12:59 AM 19 comments: 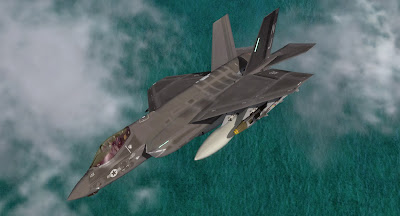 Version 2.35
January 14th 2013
- Changed pilot figure with a much more detailed model and removed pilot animation.
- Changed afteburner effect with modeled rendering for P3Dv2 compatibiliy.
- Changed transonic effect with modeled rendering for P3Dv2 compatibility.
- Removed sound barrier sound effect (adopted pilot's perspective - no sound is heard by the pilot)
- Removed high Gs and high AoA effect (they did not render properly in P3Dv2)
- Improved responsiveness of autopilot gains
- Fixed minor glitch in MFD>ENG page
- Slight visual improvement in MFD>HUD page
- Solved (partially) shadowing glitches in F-35C model when used in P3Dv2
-TACPACK ONLY: Added support for Off-boresight launch. Note: actual seeker is limited to +/-70° deg AZ/EL.
NOTE: Seeker will not detect targets outside that range.
-TACPACK ONLY: Support for Pre-planned target. Selecting PP as A/S target, the current waypoint (if any) is designated as target.
NOTE: Upon reaching the waypoint, the next waypoint is automatically designated...better be quick when releasing the weapons.
-TACPACK ONLY: Support for Tacpack generated Tacans (boat and tanker).
NOTE: ILS for the boat will be tuned automatically if Tacan frequency is entered.
-TACPACK ONLY: Added support fro proper, Tacpack driven, Head Mounted Display. Gimmick HMD removed from non-Tacpack installation.


Some additional comments:
- Installing the files into Prepar3d V2 will not change the default F-35. You can safely upgrade the visual model (only) by copy/paste ONLY the Texture and Model subfolders of the F-35A from the full package to the default F35A (no "minus" sign) folder. Better not touch the other files.

- For gameplay design reasons, in order not to loose the seeker lock for off-boresight mode, please note that the AIM-9X seeker will always continue to follow the most intense IR source acquired, even if the target exits from the 1.5 degrees circle, uless a UNDESIGNATE command is given, or lock is lost for other reasons.
You can download the update by the side bar, or by clicking HERE.
Posted by ScimmiaSpaziale at 1:59 AM 13 comments:

During the tests of the latest version of the F-14D, I noticed some minor issues with the T-45C... these are really minor things, but a little annoying to me - so I decided to fix them and here we are with another update:


You can download the updated version (version 2.57) from the side bar, or by clicking HERE.

By the way, people asked why I stick on making "full versions", rather than patches. Reason is it is easier for me to manage. Given that I update the projects quite often, it is much easier to provide updated version in this way rather than keeping track of the various amended files in the different releases.

Another thing I have been asked is to provide automatic installers - I did it once and I received a lot of negative feedback. Most people seem to prefer the manual installation, and I prefer that too - let alone the fact that you need to update the installers, Windows registry etc.
So, I'll keep on providing the files in .zip format, with no installer.
Posted by ScimmiaSpaziale at 2:34 PM 10 comments: 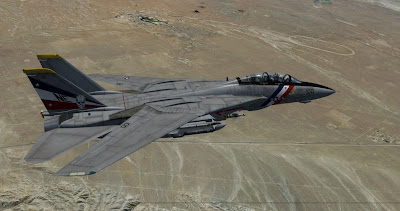 Apparently, the Beta version did not have major problems - so I just tweaked a couple of things (further tweaks to roll rate - now there should be a significant difference in roll rate depending on Mach number, and some tweaks to the main Rio display, including the addition of a declutter button). The complete list of changes is as follows:
VERSION 2.20
January 4th, 2013
- Completely new MFD system, much closer to NATOPS interface and graphics: realism and functions of the individual pages may vary (some pages are fully compliant to NATOPS, others are gimmick or guess work)
- Integrated Autopilot functions into the HSD page for gameplay purposes.
- SMS page now reflects Tacpack weapons, while ECM page provides Tacpack RWR functionalities
- Slight improvement pilot downward visibility
- Redone glass effects for P3Dv2 compatibility
- Replaced HSI gauge with modeled one: thin needle should now point to VOR location, thick needle should point to NDB station or VRS Tacan.
- Redone afterburner special effects (now modeled) for P3Dv2 compatibility
- Redone transonic special effects (now modeled) for P3Dv2 compatibility
- Replaced pilot figures with professional-level models
- Fixed bug preventing the Fuel indicator to display the correct fuel quantity (both Rio and Pilot cockpits) - note numbers and "column" position may differ a little: the numbers display the actual value
- Fixed minor bug in ADI indications.
- Increased drag at transonic speeds
- Lowered tolerance on airframe stress - it is now much easier to overstress the aircraft
- Minor tweaks to flight dynamics
- Miscellaneous improvements in cockpit graphics
- Added Declutter function to NAV screen on Rio PTID
NOTE: FLIGHT MANUAL DOES NOT REFLECT THE CHANGES ABOVE

You can download the new version by clicking HERE.
Posted by ScimmiaSpaziale at 1:58 AM 11 comments: