Projects Update and Roadmap for Fall/Winter 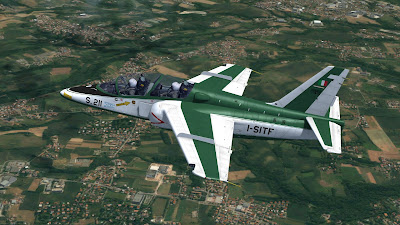 As I have received a lot of  emails of the "what will be your next plane"/"can you please do [insert favourite aircraft here]" type recently, I think it is time for a quick update on the projects I have been working on, and my roadmap for the next six months or so.

SIAI S-211This is the main project I am working on a the moment - the external model is almost done and I am working on the VC. The flight model is being worked on by Roy Holmes - so I am sure it will be a high quality job. If time and resources will allow, the package *may* include a Aermacchi M-311/M-345 rendition.
This is a payware project - price has not been set yet, but it may be 17.50€ + taxes (if only the S-211 included) up to 25€+taxes (if it turns out to be a full package).
Release date - hopefully - is late November 2017.

Eurofighter and F-35 Lightning II updates
I am still working, from time to time, on updates to both the Eurofighter and F-35 projects. Both will receive a P3Dv4 update sometime in the future - but until VRS releases Tacpack for P3Dv4, their natural habitat is still P3Dv3+Tacpack
As of today this is the status:

EUROFIGHTER - a number of small improvements/bug fixes have been already implemented in my internal build. There a about a dozen points that need to be addressed, some of them coming from real Eurofighter crew, but there are no major issues... expect a product update by the end of September. This *may* be preceded by a test version (in form of a patch) to be released on this blog.

F-35 LIGHTNING II - The loss of source files was a major blow to this project. But I am slowly rebuilding them (at least for the VC). Future updates may include cockpit improvements, new repaints and a better flight model.

Now, these are the potential future projects (meaning I may have already done some work on these, but they are mostly in my mind/dreams)...

T-45C Goshawk PRO version - A programmer from MilViz has kindly offered me a much better, more complete T-45C avionic suite he has made as test bench for their new development process. It is awesome, but I am struggling to find the time to work on it... and then it would be a great chance to make a V3 Goshawk that could include a T-45A too... We'll see.

F-14D Super Tomcat update/remake - I'd love to do this... but the loss of the source files would make me lean towards a full remake - for which I do not have the time.

T-50A  - This is another trainer I'd love to do... I started planning for this, but then it looked like other developers were doing one, and I put the project on hold. Now it seems that the situation is different and I may want to resume it.

....that is all for now. Feedback is welcome as usual!