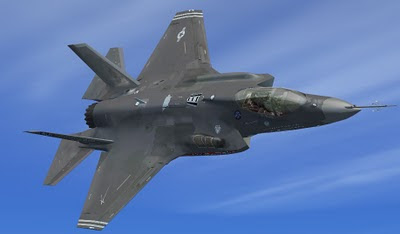 While I had not much time to work on the F-35 lately, I've already made several changes - and tried to fix the defects of the Beta 1.
My current "internal" build is now significantly different from the Beta 1, which is to be considered out-of-date.
I will keep updating the Beta 1 WIP post as reference (link below - please note it is not up-to-date in the moment I am writing):

At present, the only thing I am unable to fix is the occasional "jamming" of the MFD - the associated XML code seems correct, and the root cause seems to be a FSX "delay" in passing some internal parameters between the gauges... I will try changing the code once again, as soon as I will have the time - but chance is that this defect will be there at the time of release.
By the way, before the product is released, I will publish a document with a complete list of known inaccuracies and defects. The product will be available for download on a "no refunds" policy, which is common practice for many e-commerce sites. While I do not like the "no refunds" attitude, there are no practical ways in which I could support refunds. The best thing I can do is to give to potential customers the most accurate and complete information I can provide.

And while the virtual F-35 is late... it seems that the real one is making huge steps forward: the VTOL version is moving towards vertical flight test - currently slows down to 40 knots!

other videos (short take-off, hovering) here:
http://www.lockheedmartin.com/products/f35/index.html
Posted by ScimmiaSpaziale at 10:50 AM 6 comments: 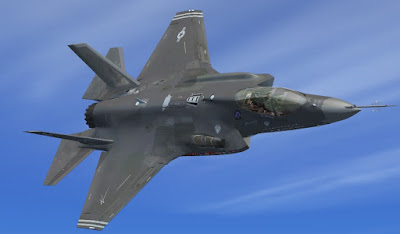 *********************
NOTICE TO TESTERS
I noticed from the test reports that there is a misunderstanding on how the new HMD should be used. The new HMD does not require the SHIFT+1 superimposition - doing so will be confusing and redundant.
There will be, in the final version, a simple superimposition of some information (e.g. mock weapon status) to give the "feel" of an HMD... but flight data will be fixed in space in front of the A/C. This is also the way it works (afaik) in the real plane - only some tactical and weapons information (and night vision) follow the head movement. The rest is fixed like a HUD - with an exceptionally wide FOV.
***********************


Below is a list of issues either known or found in the Beta1 build as released to testers tonight. This list includes only the "accepted" issues - i.e. things that I acknowledge as actual defects (if compared towards the scope of the project).
I will keep this list updated, as reference for me, for the testers and also for anyone interested in the project progress.

Note to testers: no need to rush - I won't have much time until the next weekend. While evaluating the flight model, please keep in mind the fact that the aircraft is loaded with two JDAMs.

1) Nose gear door does not close perfectly. STATUS: CLOSED - there was a glitch in the animation sequence, fixed on model build 48.

2) Fuselage/engine nozzle do not merge as they should. STATUS:CLOSED - modified nozzle 3d model on build 49

6) Pilot reflection on canopy glass is too strong (especially evident with canopy open) - STATUS:CLOSED - minor issue, but enhanced glass transparency so that the effect is less evident on model build 49

7) Uneven brightness of the A/B base textures. STATUS:CLOSED, minor issue but a/b base texture redone.

9) Asymmetry in the slats position. STATUS:CLOSED. There was a mistake in the animation tags, fixed

11) Nose gear Y-bone and landing lights are too high. STATUS:Closed. Lowered the 3D objects a little.

13) Lights position/strobe/white nav light. STATUS:Open. Lights position is being changed. Some unintended reflection on the fuselage is possible due to FSX default effects (evaluating custom light effects). Nav white light missing as I could not identify its actual location. Strobe missing for the same reason.

15) Afterburner effects bleeding through the engine nozzle. STATUS: Open. Action:unclear. This is not usually not due to a model or coding fault, but it is due to two things: 1- Misplacement of .fx graphic effects by FSX (happens to various amount on all systems) 2- User graphics driver setting to "performance" (instead of quality) will create major bleeding. I will rework the effect a little, but bleeding may still appear on some systems, depending on setting and drivers. EDIT: redesign of the .fx system should significantly reduce the bleeding.

17) Oxygen mask animation sequence incorrect. Oxymask floating in the air from time to time. STATUS:CLOSED. Redone specific animation sequence. Still, not 100% fixed as it would required a skinned (non-rigid) mesh - but should be much better in most cases.

- Enhance detail of the nose probe. Reason for rejection: changes would not be noticed by the majority of the users.

1) MFD pages may occasionally jam. STATUS: OPEN - after several attempts the situation is much better, but still happens. Action: Not sure if I can completely fix it. User can reset the MFD or reselect the page - and this usually fixes the issue. NOTE: Most users do not experience this or do not feel this as a critical defect. Status turned to yellow.

5) A-ICE button inop. STATUS:OPEN. Action: add missing code. It is unclear what the real function should be - in doubt, the switch will activate all the anti-ice systems of the A/C

8) A/P: A/T trigger not working. STATUS:OPEN. Action: unclear. I may be missing some essential entry for the A/T... since my FSX planes all suffer from this issue.

9) MFD:Graphic "ghosts" in the ENG and FCS pages (and misc.malfunctions). STATUS: CLOSED. It was a side effect of double gauge calls (implemented to limit the jamming issue). Double calls removed.

10) HUD/HMD: Optimize resolution and color. STATUS: CLOSED. Now it looks as good as it can be :-)

11) HUD/HMD: VTOL icon appears when the HOOK/STOVL button is pressed. STATUS:OPEN. Action: this would be correct for F-35B - should be removed from F-35A .

1) Microoscillations when the plane is still. STATUS:OPEN - due to contact points instability - it was fixed on aprevious build but it is back in the latest. Action: Check contact points / aircraft .cfg

3) Turn rate may be too good. STATUS: CLOSED. Action: latest flight model show a less optimistic / more realistic turn rate... still, this is, of course, the best guess we can. Thanks Roberto.


Color key:
Green - issue solved, or mitigated to the point is acceptable or not perceived by most users.
Yellow -issue open, and could be perceived as product defect by many users. Awaiting action or investigation. Or issue open, mitigated to the best of my knowledge but will still be perceived as defect by users. Or issue open but appears easy to fix.
Red - root cause not identified as of today. Or the problem is beyond my knowledge or impossible or difficult to solve.
Posted by ScimmiaSpaziale at 2:31 AM 5 comments: 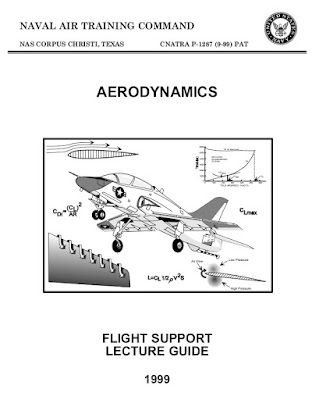 Coverpage of one of the many T-45 manuals you can find on public access U.S. Navy sites, like CNATRA website. Although the T-45C NATOPS is not available to the public, these manuals are a very interesting read for any naval aviation ethusiast...and made me realize some of the mistakes in my T-45 model.
I've received several emails asking what would be my next project after the F-35, and, while the Lightning II is not yet out of the door (nor is the Beta1 at the moment I am writing) I have a clear idea on what I will do next.

And it will be the T-45 again. Ok, I know this may be a disappointment, especially for some Italian friends that were waiting for Italian plane (like the Aermacchi 339 or 346) - but I managed to get my hands on a lot of T-45 documents (in fact most of the Navy flight training course docs are publicly available from the Navy sites - with exception of the Natops) and found that my T-45 rendition is inaccurate on several aspects.

In short, I'd like to bring the T-45 project up "one-notch" - the scope would be to provide the community with an even more effective and accurate education and training tool for virtual naval operation. The project will be freeware - as the target is knowledge sharing. I am considering an "optional" payware version with some extras (like the rear seat cockpit) to cover some development costs, but those may be well covered by the F-35 - so it is just an option.
Posted by ScimmiaSpaziale at 2:38 PM 14 comments:

Just a quick note to let you know that the Beta 1 version is complete. There are some nasty bugs (like the tendency of the MFD to turn into a complete mess fo no apparent reason) and some of the planned functionality is still missing - but should be a huge step forward with respect to the Alpha.
Since it is pretty late in the night (and since I am too sleepy to do ir right now) the files will not be packed and sent to the recipients today. I will do that asap (not sure if tomorrow or Tuesday). I will make a post once the emails have been sent.
Posted by ScimmiaSpaziale at 2:10 AM 3 comments: