Do you have a webcam? Do you have very basic do-it-yourself skill/attitude? Well, add few euros and you may have everything you need to make a do-it-yourself-thanks-to-a-great-freeware-app head tracking device. The GNU freeware I'm talking about is called "FreeTrack", and the project website is this:
http://www.free-track.net/
For those who don't know, "head tracking", in software, means the ability for the software to know the position/orientation of the user's head and use this information to receive input from the user. Most common usage in simulation games is: you move your head (slightly) and the point of view, in the cockpit, moves accordingly (with some movement amplification - if you think about it, it is necessary to amplify the movement).
There are commercial products that do this. TrackIR from Natural Point is the market leader for games, but it is not really cheap - as it is well above the 100 Euros.
If you want try the do-it-yourself-way, you'll need:
- The FreeTrack sofware from the site above
- A webcam
- Some LEDs and proper resistor(s) and batteries.
- A baseball cap and something to hold the led and attach them to the cap.
How it works: basically, you put three LEDs on a baseball cap in a given (triangular) geometry. You wear the cap and switch the leds on then lauch Freetrack. Freetrack takes the webcam image, processes it and isolates the position of the LEDs -from which it calculates the position and orientation of your head which is then, at your choice, translated into Mouse/joystick/trackIR emulation or SimConnect (FSX) controls.

Before trying this out I was VERY skeptical about its functionality and usability. Now I am a believer. I will post my construction of the device, which was done with a single "LEDstrip" (with regular visible red light LEDs) and a unmodified Microsoft VX-3000 webcam. Try it. It may change your way of experiencing simulations (and, if you do not like it, it is still fun trying it and it is very cheap).
Posted by ScimmiaSpaziale at 8:52 AM No comments:

Labels: FreeTrack, FSX, How to

Time for another Tomcat update. Unfortunately, I had no time to complete the exerior modeling so far. The cockpit and the weapons need some more work, and there are areas of the fuselage that could use some tweaking. Some work has been done on the textures and the reflections, which are now complete. This is how the Tomcat is looking so far. The "default" paint scheme will be the low visibility version of the "Tomcat Last Flight" event. 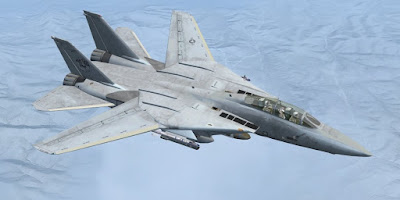 Posted by ScimmiaSpaziale at 6:10 PM No comments:

Microsoft has just annouced 5000 layoffs. While most of them are not related to the gaming businness, some of them are. In particular, ACES Studio (developers of Flight Simulator and Train Simulator) seem to be severely affected by the workforce reduction (source: http://www.gamasutra.com/php-bin/news_index.php?story=21981 ).

I'm not sure this means anything for the future of Flight Simulator. But I'm taking this chance to spend my two cents on what is wrong with FSX - which is, as you know, the platform I am developing for.

First...is there anything wrong with FSX at all? Definitely yes. Lots of people are sticking to FS2004 after two years from the release of FSX. Some of the users have been moving to XPlane and lots of freeware developers have quit. It is a fact, for example, that freeware (which was a key point for the success of FS) is not as big in FSX as it has been in the past. And some (excellent) payware add-ons are definitely overpriced. So, yes. I think there is an issue with FSX. Well, I think there is more than just one:

- Performace. Regardless of what Microsoft says, there is a performance issue with FSX. It is significantly slower than most graphically intensive games. I've yet to see a computer that can run it smoothly with graphics maxed out and some add-ons attached.
Ok, I know you can tweak the performance in several ways - but this is not what the average user does, and definitely not what is supposed to do IMHO. I also know that the poor performance is due to the extreme flexibility of the engine. Still, I think it is hard for the average user to forgive it.

- Graphics quality (versus performance). FSX can be beautiful (with proper add-ons and configuration in particular) but some stock textures are incredibly poor and some areas of the world are missing a lot of detail. The whole "cartoonish" color palette can be effective at times...but is far from looking real. The "desertification" of Italy (which is a problem all the Italian users know) is another example. Or take a look at the "bush flying" mission and you'll see some of the poorest mountain scenario I've seen recently in a videogame.
Now, take Xbox 360's Ace Combat 6: ok, I know it is just an arcade game. And I know FSX is dozen of times more complex. And I know the extremely versatile terrain engine of FSX. Still, Ace Combat 6 has some breath taking graphics which run at 60fps on a $179 machine. Ok, different software, different complexity, different customers....whatever. Still, please explain to the average user why his computer is able to run Crysis smoothly while FSX is stuttering.

- Poor freeware scene. This is not Micorsoft's fault, but it is definitely an issue. Quality FSX add-ons are so complex that there is just a bunch of crazy kamikazes that, like me, are willing to spend so much time on FSX-SDK for free. By the way,I think the SDK is not bad at all - with the exception of being somewhat 3DStudio Max dependent for modeling (while it offers Gmax compatibility we all know that .gmax is not really a file format you want for your souce files - as they cannot be exported in other 3d tools). The main problem, IMHO, is that the amount of work required for a completely new add-on plane or a highly detailed scenario requires such a high amount of work that: 1) almost nobody is willing to do that for free or 2) even if you want to do it for free, requires a lot of dedicated teamworking as well as resources for documentation.

Ok, these were just a first few things that come to my mind:there are a lot of other things that would need to be discussed.
Let me also say that, with all the defects FSX has, it is still an amazingly flexible simulation platform and, definitely, the most complete FS release and the best recreational flight simulator I've seen. It is, simply, not as good as FS2004 was at its times.

All in all, I want to be positive on the future of the franchise. So, here is my list of some of the things that Microsoft Flight Simulator XI should have, if it will be ever released:

- revamped graphic engine (or even better a completely new one)
- all the FSX:Acceleration features should become stock features
- default scenario should be as complex as, say, Ultimate Terrain X
- have the ability to create photoscenery from internet services like Virtual Earth (like Tile Proxy and FS Earth Tiles do). Possibly SDK shoud sport an automated Autogen placement tool.
- add STOV/L fight modeling
- A better support for freeware developers (I could think of several action Microsoft should take)

Ok, just few ideas...it is 5Am so I think I should catch some sleep. The general idea is, "Dear Microsoft take a look at what the competition and third parties are doing good and do it". Like have the boats rolling, as in XPlane, just to make an example.

Come on, Microsoft! We love FSX and we do not want it to die! We want FSXI and we want it to be great!
Posted by ScimmiaSpaziale at 4:41 AM 8 comments:

T-45C version 1.15 released
A couple of days ago I saw an amazing video of people making formation flights and carrier qualifications in FSX with my Goshawk model. I was impressed but I noticed that the animation that makes the gear doors "relax" when the engine is off was not working properly in multiplayer.
I decided to make a small update to the Goshawk, which brings several minor improvements/fixes. File name is T45CFSXC.zip, and has been uploaded to both Avsim and Flightsim. Here is the list of changes from the previous release (as you can see these are only minor fixes):
Visual model:
- all textures have now .dds extension. Please note that they were already in dds format, only the file extension was incorrect. I kept the textures with no mipmaps (slower frame rate but better clarity)
- slight improvement of reflections
- fixed minor misplacement on right trail edge flap
- fixed minor geometry issue on right air intake
- restored keypad on instructor seat
- gear door opening when engine is off is now an optional feature: in the real Goshawk, as in many other planes, when you turn the engine off the gear doors open (as there is no power in the hydraulic system). I think it was nice to have this feature in the model and implemented that as a "special" animation. It now turns out that, in multiplayer, the gear doors of other T-45C you might be playing with will always appear open - even when the plane is flying. So, now the default model is without the additional gear door animation. An alternate model with the additional gear door animation is stored in the "model_with_gear_door_anim" folder, should you prefer to have the animation working, copy the t45c.mdl in that folder and paste it in your FSX/Simobjects/Airplanes/Boeing_T45C/model and overwrite the the existing one. A backup of the default model is stored in the "model_with_gear_door_anim" folder.
Interior model:
- added a NAV/OBS knob (which was missing) nearby the NAV control. I experienced some malfunctioning but I am not sure of what is not working...so it may not work correctly.Please take it as is for now.
- added scratchpad some more functionality. As this is dependendent on the Hornet avionics code, it may not work correctly. A/P master switch is the only thing that seems to work fine.
Flight model:
- Higher roll rate. This seems more accurate according to users' feedback
2D HUD:
- provided a 16:9 panel file for people who use the 2D HUD with a widescreen panel (like me);the folder panel16_9 contains the widescreen panel, just grab the panel.cfg in that folder and move it to your the panel folder in the Boeing_T45 airplane folder. Panel4_3 contains a backup of the 4:3 panel.
Posted by ScimmiaSpaziale at 11:55 PM 7 comments: