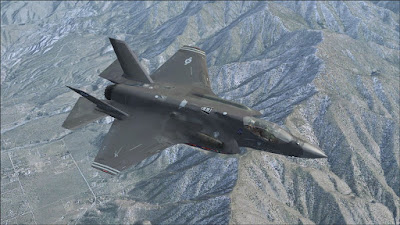 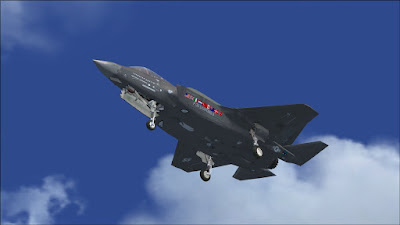 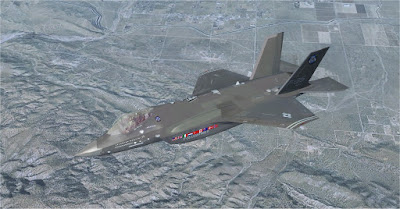 Above are some screenshots taken during F-35 AA-1 flight testing nearby Edwards AFB. It is very hard to judge what would be the right behaviour of the real plane - but I am doing my best. Definitely there will be some tuning needed during Beta testing. Unfortunately I had not much time to work on the F-35 in the past few weeks - I am doing what I can.
Status of the project is as follows:

At present - it is likely that the Beta version will be ready in early November... later than I initially thought...but I am doing what I can with the time I have :-)

Posted by ScimmiaSpaziale at 2:20 AM 22 comments: 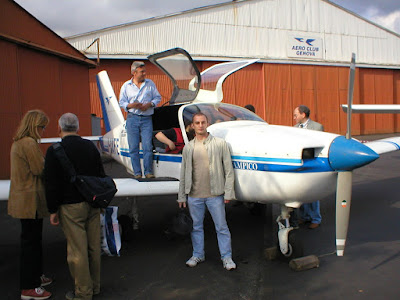 This is me in front of the Socata TB.9 Tampico I-IAFE of the Genova Aeroclub, during Genova Air Show 2004. This is the only time I remember in which the public was allowed to get into the parking area of the Sestri airport. So I took the chance to take picture with my old friend :-) 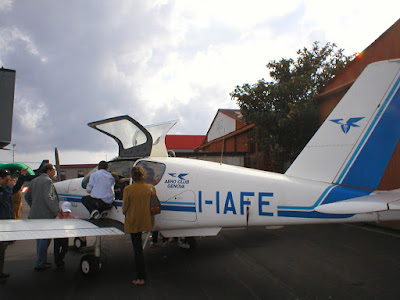 Another view of the I-IAFE, on the back there are the hangars of the Piaggio Aero Industries, where the amazing P.180 is manufactured. 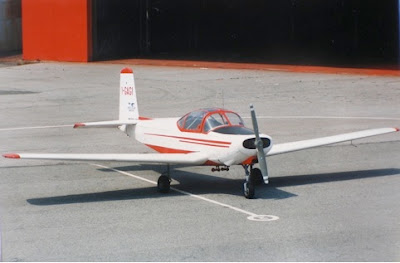 And this is the Aviamilano P.19 Scricciolo I-GAGI, on which I logged roughly 10 hours. It was cheaper than the TB9, but it was also a significantly older machine. It was also much fun to fly, in my opinion, as its rough cockpit gave you a strong "I am flying" feel, rather than the TB9 that felt like "I am driving a modern compact car" :-) Some days ago I discovered (thanks to google) that it has been acquired by a member of the CAP Lazio and will be restored to flight conditions. By the way, basic P.19 was a taildragger - but could be asily modified to tricycle, as I-GAGI was.

When I started this blog, one of the hardest things was to chose a name for it. I admit IndiaFoxtEcho was not a bright choice. It it the "shortened" callsign of I-IAFE, the plane on which I spent most hours during my days as student pilot at the local Aeroclub. It is also the plane on which I did my first solo flight in 1992.
While I had to sacrifice some things, like the "traditional" European-trip vacation that most people do in the summer between high school and university, I owe the fantastic experience of earning the Private Pilot Licence to my parents.Well,in a broader but more exact sense, I owe them everything. They are hard working people who supported me in everything I wanted to do, and after many years spent working they are currently enjoying retirement. The PPL was expensive and we surely were not a rich family.
I quit flying few years later for several reasons, main one being the money. Flying is a very expensive hobby. And the more I did it, the more I wanted to make new experiences, fly other planes and see other places, but I could not afford more than being a "sunday pilot". Takeoff from Sestri, go to Portofino then back to Sestri. And I could not afford to try more complex and more expensive planes. So, I had to admit that at some point I got bored. But I do not regret anything. Getting a pilot licence is one of the things I always wanted to do, one of those things you want to do before you die. It was great, I am still proud of "eagle" pin and I am grateful for having had this opportunity.
At the time I quit, I logged 52 hours, flying TB-9, PA-28 and P.19. Apart from Genova Sestri, I've also landed and took-off from Albenga, Sarzana Luni, Pisa, Lucca and Cuneo Levaldigi.
Now, in order to give some sense to this post (apart from the self-celebrating amarcord), I wanted to share with you three "lesson to be learned" I took when I was a student pilot:

Lesson 1 - Pride is dangerous.
Being only 165cm tall I am definitely a short person. Which, when you are 18 years old, it is a fact you should have accepted. But I did not. So, when I was flying the P.19 I was advised to use a small cushion so that I could operate the pedals in a more comfortable way. Of course I refused the cushion, which was kind of a symbol of the fact I was short. Fact is that I was not comfortable, so one time it happened, during one flight, that one of my legs "fall asleep" (don't know the proper English for it - hope you get what I mean). Result: when landing, just after touchdown, the plane steered abruptly and I could not correct it as I could not move my leg. Good thing there was the flight instructor.

Lesson 2 - Trust the procedures
One problem you may have if you are a GA student pilot is that if you home airport has a big unobstructed runway, you are not really used to smaller ones. Albenga has not a small runway, but has a small hill on its side that, in case you are not making a straight-in approach from the sea, forces you to make a higher pattern than the one I was used to to at Sestri (which is at sea level and all patterns are done 1000ft over the sea). So, I was slightly afraid to be low...and overshoot the 1500ft (if I remember right) reccomended altitude. Result: I was very high at landing, hence very fast and I had the plane floating a lot over the runway. And I touched with a harder-than-usual landing almost in the mid of the runway. I should have declared a missed approach and retry.

Lesson 3A - Flight must be carefully planned/1
That is, look at the charts carefully and think ahead of what you should expect. I was flying solo from Sestri to Levaldingi, which in VFR basically means: follow the highway from Genova to Savona, then from Savona to Fossano. The issue was I had not planned how to reckon Fossano from the other towns (neither visually nor with a VOR reading). So I missed it, and while I was trying to understand where I was I got disoriented in the middle of the Piedmont countryside. Visibility was decreasing, so I decided to go back to Genova - which was a wise decision - albeit I had to cross the mountains with marginal VFR conditions - but I intercepted the highway to Savona and then I got back safely.
Lesson 3B - Flight must be carefully planned/2 (and you should look around you)
That is, look at the approach charts carefully. While planning your flight,pay particular attention to obstacles around airports you don't know - like high voltage lines, even if they are not close to the path you think you will follow.
In this case I was flying with my instructor (cmdr.Sincich) to Sarzana Luni. It is mainly a Navy helicopter base, with a small runway. Much smaller than Sestri. So, while landing, I was completely focused on the runway itself, and did not notice the high voltage lines. When the instructor warned me,we were not really close to them and there was no real danger. But I still remember this episode as I my attention was so completely focused on one thing (the runway) that I was not looking at anything else.
Flying was a great experience that marked my life forever.
P.S. As for FSX, F-35 development is slowing down due to lack of time. In these days my job is absorbing much of my energies. I'll post an update asap.
EDIT: Forgot to say that all of the episodes above happened almost 17 years ago...
Posted by ScimmiaSpaziale at 2:05 PM 6 comments: