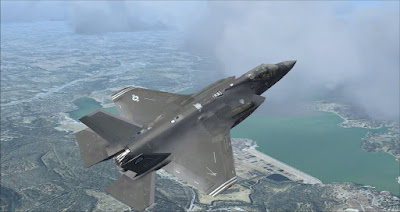 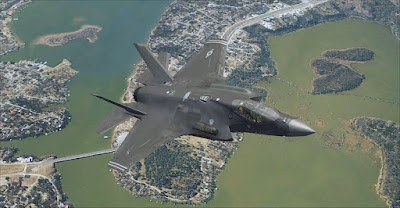 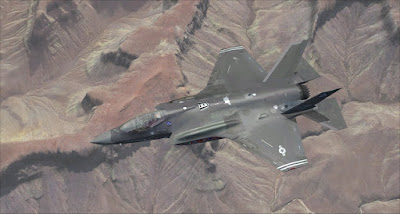 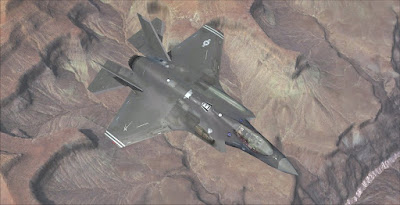 Above are some screenshots of the F-35 AA-1 taken while I was testing the flight model. It is pretty hard to tell if it is "right", as, obviously, Lockheed Martin test pilots keep on saying it is an oustanding aircraft with excellent performance and maneuverability... but on the other hand, many "experts" in the internet are extremely critical on the plane performance - and the whole JSF project (I guess some of that hate comes from the fact that the F-35 will replace the F-16 which is an extremely successful and popular model)...
Anyway, I am pretty happy with the flight model. It needs some work but it is a good start.
The cockpit is suffering some delay... but I think it will be ready in 2-3 weeks.
Posted by ScimmiaSpaziale at 5:44 PM 17 comments:

A Couple of F-35 Screenshots 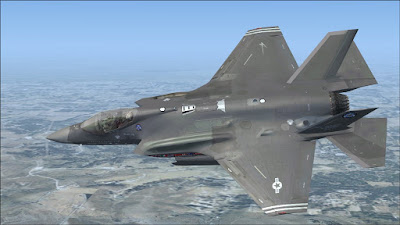 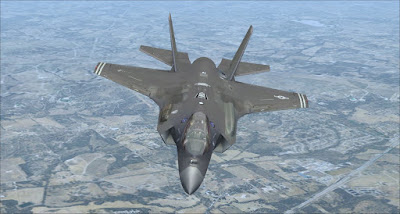 Above are two in game screenshots of the F-35A Lighting II project I am working on. As you can see, the external model is almost complete - there is some minor "cleaning" to be done here and there, but it is done. While it is an highly detailed model, the graphics performance is not bad - in fact it is slightly better than the Tomcat. At present, the model depicts the AA-1 development bird, meaning the first "F-35" (and not X-35) even built. At the moment I am writing it is also the only CTOL bird actually flying, as all the other prototypes undergoing flight test are F-35Bs (VTOL). The only major "artistic licence" so far is that the if you open the weapon bays, you can see two AIM-120 and two JDAMs - but all the pictures I've seen so far of the AA-1 were showing mock ordnance.
The design of the real AA-1 has been subject to major weight-saving oriented improvements, so that the AF-1 and following CTOL prototypes will have a number of design changes. While, at present, AF-1 has been "rolled out" several months ago there are not many pictures of it on the internet, but its first flight should not be too distant... so that more information will be available - the plan being, of course, add the AF-1 to the package (or a "production" model). A third model would be a production model with external loads (there are pictures of a BF bird on the gorund with a pretty impressive loadout).
At present, my project will be focused on the F-35A - and my current target is complete the AA-1 model. While the F-35B (VTOL) is an extremely interesting machine, I am not currently working on it - mainly because IRIS is working on such model and because I prefer quality to quantity - considering I am a one-man team it is mandatory to keep the size of the project reasonable.
While it may not be evident at first sight, the F-35B fuselage is much different from the F-35A.Nose, wings and tails are almost identical - but almost everything else is different.
On the opposite, the CATOBAR F-35C fuselage geometry is close to the F-35A (main differences being the modifications to the nose gear, refuel probe and tail hook) but the wing is completely different: it is much bigger, and has a folding mechanism and spoilers.
So, making the -B and -C models starting from what I have would be surely doable - but it would require some major redesign of several areas so, for the moment, I am sticking to the F-35A - and I will do my best to achieve a good quality level on that before making any further step.
Posted by ScimmiaSpaziale at 4:53 AM 15 comments:

Fire on Monte Moro, over Quinto and Nervi - at the Eastern limit of Genoa. Due to the exposure, this picture is overly dramatic. The fire is very large and quite close to the houses, but thanks to the hard work of the firemen, there has been no risk for the population.

At the moment I am writing, two Canadair CL415's and one S-64 Skycrane are flying in a vast firefighting operation just above my house.
In the past 24 hours a fire has burnt most of the woods in the Eastern part of Genoa, requiring a major effort by firefighters who have been working continuosly. There seems to be no risk for the the population, as the fires nearby the inhabitated areas have been extinguished - so it is possible to admire the spectacular flying of the Canadairs and the Skycrane collecting water from the sea and immediately dropping it on the nearby hills, without worrying too much for people's safety.

The Canadair is really an amazing machine. It is an usual guest at the local airport during summer and I've seen its demo in several airshows - and its maneuverability never fails to impress me. Seeing it landing on the water is simply spectacular - and it is even more spectacular seeing two of them in action together with the Skycrane. It is also a machine that would deserve more attention in FSX. Massimo Taccoli created an excellent FS2004 freeware model (link below) but afaik there is no triple-A FSX native model so far... But do not start asking me to do one, as my agenda is full...
http://www.maxtac.it/maxtac/index.php?option=com_docman&task=cat_view&gid=36&Itemid=59&limitstart=16
Skycrane is also impressive, as it is considerably larger than the average chopper - and surely much larger than the ones that usually populate the sky over Genoa.
Kudos to the aircrews and the firemen for their courage, skill and professionality - they acted promptly so that there has been no major incovenience to the population (apart from a blackout and a traffic-jam, of course) - and the only trouble I had was to clean my scooter from the ashes before going to work.
EDIT: I've just read in the news that the Canadairs were 4 and not 2 - I can only imagine the level of training and coordination required in such a scenario.
Posted by ScimmiaSpaziale at 6:33 PM 7 comments: