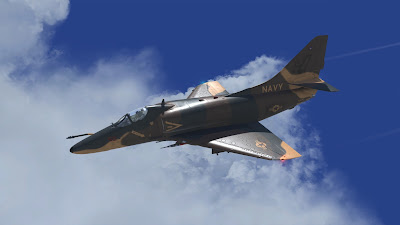 As per my usual procedure, here is the post meant to collect the feedback from the A-4 Beta Testing. This post is (almost) constantly update with the "accepted" bugs and suggestions, color coded to reflect their status. "Accepted" means that I have understood what the testers reported, I could replicate it (or at least be sure this is not a misinterpretation or an error from the tester) and I have "accepted" it as a item to be addressed.

To apply for the Beta please send and email to indiafoxtecho@gmail.com with:
- SHORT description of your system: just CPU, GPU, RAM
- Exact version of the simulator you are running (A-4 requires at least P3D v4.4)
- If you have Tacpact installed or not
- SHORT description of real and virtual flying experience

SUBJECT OF THE EMAIL SHALL BE "A-4 BETA TESTING"

Precedence will be given to users and testers of the TA-4J as they are more familiar with the plane.

REPORTING BUGS
The preferred way to report bugs is to post a comment on this blog (so that everyone can see it). Otherwise, email messages with "TA-4J Bug Report" as subject are fine.
It is better, before posting, if you check if thebug you have spotted is already in the list below or in the comments.
Bugs or change request are evaluated ASAP and, if confirmed and accepted, added to the list below. 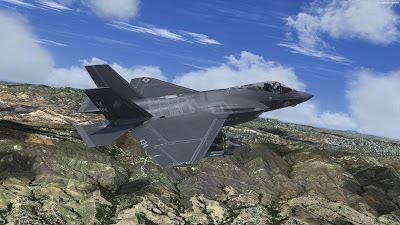 NOTE 1: version 3.65 had a small glitch that prevented correct indication of the CEX Tacan direction in the HUD heading tape in some cases… This has been fixed and the release has been updated to version 3.65.1

The momentum of the real F-35 program keeps on growing and the plane is achieving a number of milestones around the world. So I decided to release yet another update to my virtual rendition which fixes a couple of bugs and introduces two meaningful repaints, specifically the livery of the No.617 Squadron RAF "the Dambusters" that made history being the first british squadron operating from the deck of the Queen Elizabeth, and VMFA-314 "Black Knights" that is the first USMC squadron flying with the "C" model of the Lightning II.

This is likely to be the last update for the F-35 for Prepar3D v4. I have some ideas to improve the models and I am looking forward to port it to the new Microsoft Flight Simulator… although it is more than likely that many functions, like STOVL flight and XML based MFD/HUDs, will not work in the new Platform (which is also unlikely to support any kind of weapon).
While I am trying to port some of my projects to X-Plane, at the moment I do not plan to convert the F-35 as I do not have the skill to bring it to the same level of functionality of the one done by AoA Simulations.

Anyway here is the change log of this update:

IMPORTANT! THIS UPDATE WILL WORK ONLY WITH P3Dv4.4 and is preconfigured to work with PBR models (so P3Dv4.4 / v4.5)

Version 3.65 - 17/11/2019
- Added CEX navaids compatibility
- Added VMFA-314 "Black Knights" F-35C livery
- Added no.617 Squadron RAF "Dambusters" F-35B livery
- Fixed glitch in F-35C landing gear door animation on PBR models
- Fixed bug in TACAN to MHz conversion
- Fixed bug that allowed to continue flying in STOVL mode if out of fuel.
When the engine stops running and the plane is not on the ground, STOVL mode will be deactivated.

As usual, the upgrade can be downloaded from the side bar as usual or by clicking HERE.
Posted by ScimmiaSpaziale at 6:18 PM 6 comments: