Now that the F-35 version 2.21 is out, here is a post to collect feedback, observations, suggestions, etc. etc. to version 2.21. As you know my projects are being constantly upgraded...and sooner or later there will be an upgrade. So this is basically a memo for me... you are welcome to add your input in the comments. If you have a bug to report - please check if it is limited to a specific model (A/B/C) or it is a common one.

F-35B Fuel tanks are misaligned with respect to the pylons.
This is a modeling mistake - a minor one if you ask me...but these is one of those minor things that cannot be "unseen" once noticed...and it is one of those thing which are very annoying, IMHO.
So, in case it is a major problem for you and you cannot live with it, an MDL for the F-35B which fixes the issue can be downloaded by clicking HERE.
STATUS: Fixed in the updated MDL (download above)

All versions - TABS do not work in right half of the MFD when TSD is in full screen mode
Probably a coding issue... I'll check.
STATUS: Fixed in new MFD code (will be released in an update)

All versions - Autopilot GPS steering missing
It was left out by design decision - with many other features - in order to limit the complexity of the MFD code (which is pretty big for an FSX gauge as you can guess!). I'll consider to add it in the next update.
STATUS: Open.

All versions - Weapon loads do not work - only one AIM-9X shows
A very limited number of users is reporting this. This is (almost) definitely not an issue of my package - there is most probably an Add-on module with changes the weight stations. One user has reported that the source of this was the MilViz F-15E Loadout manager (F-15 was disinstalled by the loadout manager was still active and for some reason was setting all load station to zero except the first one). Sorry, this is not my fault and there is nothing I can do about it (also because I do not have the Milviz F-15E...maybe a good reason to buy it, looks good!).
STATUS: Confirmed that it is due to Milviz F-15 loadout manager... not a bug of the package.

All versions - Add more weapons!
I'll evaluate the addition of other weapons carefully - they are a burden to the model...
STATUS: Under evaluation.
EDIT:Added AIM-120C to internal stations. No time to do more than that.

Tacpack integration?
Integration of the Tacpack functionalities is totally doable but takes time. And I do not have much of it. I am working for a very limited set of functions - guns, AIM-9X and AIM-120 visual launch, JDAM freefall drop. Probably not more than that... which is comparable to the current F-35 capabilities :-)!
STATUS: Under evaluation. Depending on F-14D integration and Tacpack schedule for the build that will support support third party aicraft usage (still unclear).
EDIT: Tested AIM-9X (visual launch only), AIM-120 (visual launch only), JDAMs (freefall drop). Status of weapons as follows.

All versions - SMS not showing front view of GBU-32
Coding error found and fixed.
STATUS: Fixed in new MFD code (will be release in an update)

All versions - Request to change nominal weight of fuel tanks to an "empty" valueAgreeable because they do not contibute with actual fuel - which could then be added to the fuel section in the aircraft.cfg.
STATUS: Closed. Recompiled model with 381 (empty tank, assumed the same as FPU-11) + 350 (estimated pylon weight) = 731lbs as token weight.

All versions - No paintkit available!As you may be aware of, I am not used to work with layered PSD files. So a proper paintikit is not available at the moment. However, I will provide "blank" textures (i.e. without markings) which are probably an acceptable starting point.
These were previously part of the package, but were left out from version 2.20 onward to reduce file size.
Please note that, from version 2.20, there are minor changes in several aeras... so older textures should not be used.
STATUS: Open, will provide blank files as separate download.

Posted by ScimmiaSpaziale at 11:41 PM 55 comments: 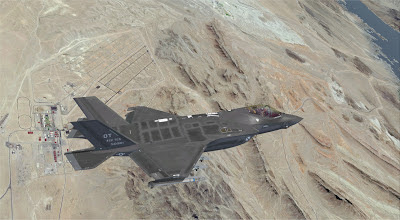 Following the feedback from the limited release of version 2.20 of the F-35 project, the files have been furtherly updated to version 2.21.
The latest version can be dowloaded from Google Drive following the link on the side bar, or by clicking HERE. Also, since version 2.21 appears to work as intended, it will be soon released to Avsim and Flightsim.

Posted by ScimmiaSpaziale at 5:03 PM 3 comments: 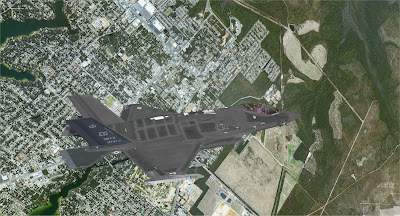 NOTE: FOLLOWING THE FEEDBACK FROM THE LIMITED RELEASE, THE F-35 PROJECT HAS BEEN UPDATED TO VERSION 2.21 - SEE THE NEXT POST!
Finally I am uploading the much awaited (and time consuming!) F-35 upgrade to version 2.20. For the moment it will uploaded only to Google Drive - just to check if there are no catastrophic issues before uploading to the usual repositories.

IT IS RECOMMENDED THAT YOU UNISTALL AND/OR DELETE FILES FROM PREVIOUS VERSION BEFORE INSTALLING VERSION 2.20.

You can download the file from Google Drive by clicking HERE (NOTE: AMENDED TO VESION 2.21)

Posted by ScimmiaSpaziale at 12:44 AM 13 comments: