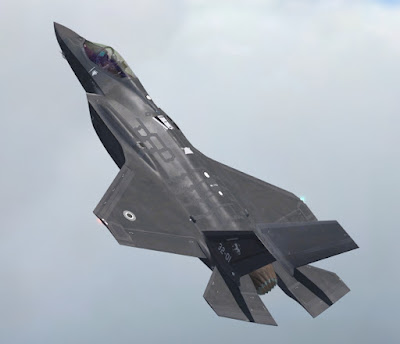 * UPDATE *
****
I have identified a small bug in v3.20 so that the right MFD was not completely functional. Also, power up sequence of the MFD restored to left first, right second. Patch files updated to v3.21
****

As some of you are aware of, some months ago I lost all the source files of my flight simulation projects - this makes very difficult for me to update them as frequently as I would like to - but still I am doing my best in order to fix as many bugs as possible, and increase the overall quality of my projects.

Specifically, for the F-35 I am (slowly) rebuilding the cockpit models  - so that I can make some significant improvements to the VC enviroment. I have no firm schedule for this, as the Eurofighter Project has the priority. Still, I am not abandoning the F-35 and here is another update to the avionics.

As for the previous avionics updates, this is for P3D only. I will try to find the time to apply some of these changes to the FSX version too - although it is not officially supported as you know.

Version 3.20 (from version 3.16)
- Fixed a bug in all previous version that made it so that Air-to-air track no.3 was rendered in a wrong position on the radar screen
- As reported by user Ariel, changed the power up order of the MFD screens. Now the RIGHT MFD will power up first (on Battery power only) and the LEFT MFD will power up second (on generator power).
- Changed ENG page so that FF, HYD1 and HYD2 are reported as digits rather than "bars" - this should be the same as real life (reported by user Ariel)
- Changed FUEL page so that fuel quantities in tanks are reported in pounds rather than in gallons - again this should be the way it works in real life (reported by user Ariel)

Other changes already present in version 3.16 (with comparison to version 3.11)
- Fixed minor bug in FCS code
- Solved minor graphic flaw when the Function Access Buttons are SWAPped
- Restored "virtual speed brakes" indication in FCS page
- Implemented FAB-fuel function - fuel quantity, is now reported as magenta bars in the FAB section, Joker and Bingo are reported as white lines.
- Fixed position of transfer pumps in the FUEL page
- IPP switch now also drives engine starter (in reality, the switch has three positions: OFF-AUTO-START and should be spring loaded to the AUTO, in the sim it is just OFF or START)
- Left half of the MFD works on battery power only, Right half does not (as in reality) - when the generator is not working, the right MFD will turn off
- Increased startup time for both halves of the MFD to 15 seconds (as in reality)
- TFLIR and DAS now require generator power to run
- A/S and Tacpack radars will not work unless engine is running

You can download the update from Google Drive from the side bar on this blog or by clicking HERE.
The patch must be manually installed - to do so, simply drag and drop the folders in the zip file(namely F-35_MFD, FCS an Tactical) into the F-35A\panel folder.
Note that this must be done only in the F-35A folder BUT will affect also the -B and -C variants: the avionic code is aliased from the -A version for all the variants.

Posted by ScimmiaSpaziale at 11:58 PM 14 comments: