Reinstalling Windows, FSX and the SDK 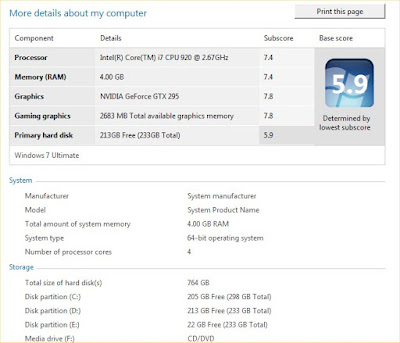 Windows 7 performance assessment of my computer - My nerd side is relatively happy but needs a new super-fast hard disk to match the rest (...and I'm pretty sure FSX will still be sluggish :-) )

Unfortunately I had to face the failure of one of my hard disks - I had a backup of most of my source files, but I lost some part of my work on the F-35 and few minor tweaks of the F-14.

On the bright side, this forced a much needed system cleanup (format of the main HD and clean install of Windows XP, FSX and its SDK)... And the reason why I am writing this post is a "pro memoria". It is not the first time I do this, and I always face some difficulties in having the FSX modeling SDK work. It really annoying - and I know that some people approaching the SDK are let down by these issues. On the other hand, other persons do not have this kind of issues - which makes the whole thing even more frustrating for those who coul not manage to make the modeling SDK work.

If you follow the SDK instructions correctly - and they are correct! - you may still be unable to compile a model...for several reasons.
So, I am writing down all the "undocumented" steps you may need to take to make the modeling tools work (either 3D Studio or Gmax) with FSX.

By the way, I've also installed Windows 7 64 bit, just for curiosity, and it seems to work fine. Given that, on my machine (i7920 and X295), Vista 64 bit made FSX run smoother (in DX10) than XP (by almost 9-10 fps with the same settings!), Windows 7 seems to work really good. Time for a OS upgrade? Not sure - may be some of my development tools don't work... Still, the new Windows seems good.

Posted by ScimmiaSpaziale at 5:48 PM 9 comments:

Labels: FSX, How to, Windows

Just a quick note about the F-14 dynamics: I know that v1.00 dynamics are not that good - possibly with the exception of carrier operations. They were developed with carrier ops in mind, and relatively late in the project... and there are some major mistakes.

As I had received a "strong" negative feedback from one user, which was right in many respects, I decided to redo the dynamics by scratch. You know I take criticism seriously (well as seriously as it is reasonable for a videogame)... Long story short, a new flight model is being tested and it is not as bad as the previos one - I will release it shortly.
Posted by ScimmiaSpaziale at 11:12 PM 4 comments: 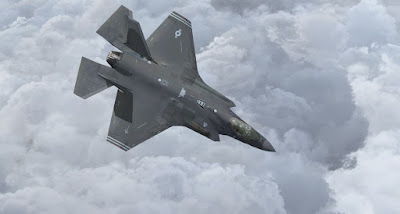 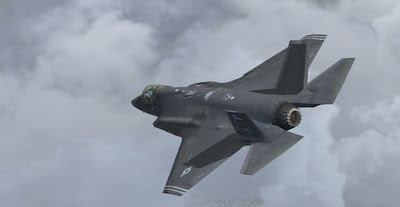 A preliminary flight model is in place - and seems to work fine, provided that, of course, some of the data are estimated. 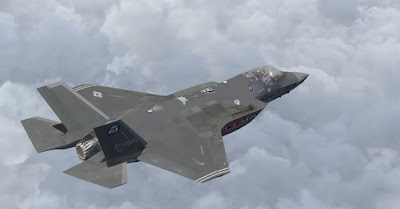 Most animations are implemented and seem to work correctly.

A couple of sleepless nights (for wrong reasons) meant significant progress in F-35 modeling. Outer model is almost done - everything is modeled,textured and animated with the exception of the weapon bays, the refuel receptacle and the special effects. Work on the virtual cockpit is just started - but modeling shoud not take much time as the F-35 'pit is extremely simple from the geometric point of view.
Posted by ScimmiaSpaziale at 2:13 PM 8 comments: 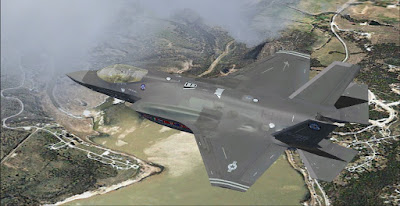 As today is an unusually rainy day here in Genoa, I finally had the time to complete the main texturing of the F-35A model I am working on - so here is a picture. I'm posting just one image since the modeling is not complete (cockpit and weapon bays) and several parts are untextured yet (landing gear, part of the cockpit - and weapon bays of course). Basic animation is working - but it will be redone with custom sequences.

All the main textures are photoreal and up to 4096X4096 in resolution...this means you will have to modify the config file to allow for large textures....and this also means that the model takes a little longer to load.

For now, I'll stick with the AA-1 model (CTOL development aircraft). BF-1 (VTOL) and CF-1 (CATOBAR - rolled out few days ago) are not completely ruled out for now, but they are not scheduled so far. Albeit similar, those models differ substantially from the CTOL version...and unfortunately the differences are in critical areas for the 3D model... Besides, Iris Simulations is working on an F-35B...

I'll probably add a production model - provided that I will get reliable information on the changes planned to the AA-1 design (e.g. I know they are planning to change the nose gear door to a split one, and I think they are porbably moving the auxiliary exhaust nearby the engine nozzle from the top side to the lower one - my guess based on the fact that both B and C protos have in there).

Posted by ScimmiaSpaziale at 5:31 PM 6 comments: 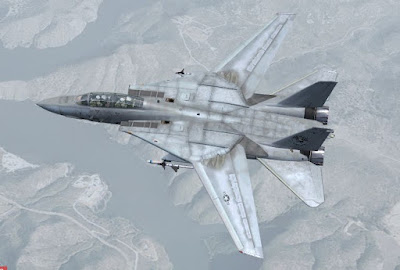 F-14D for FSX:Acceleration with added specular mapping - I struggled to get an angle that could highlight the effect most. I gave it relatively "subtle" value so it is barely visible from most angles. I like it....and looks much better in motion.
Sunny weather here in Italy so I am spending most of my spare time on the beach rather than in front of a computer...Therefore my FSX design-work is proceeding veeery slowly. As you may be aware of, I am working on an F-35A model. As there is some chance this may become my first payware project, I am trying my best to make a top notch model - I want it to include every "bells and whistles" allowed by FSX - and so I decided to spend some of my time on testing things I am not really good at or never implemented at all.
One thing I never employed successfully in my models is specular mapping. Basically, for those who do not know, specular map is a texture map which defines what will be the color, the intensity and the sharpness of the reflection of the material on a point-by-point basis. This was not possible in FS2004 and allows some very cool specular effects.
I never implemented it on my models as, in the tests I did, I felt it provided an excessive shininess of the surfaces. On the other hand there are some really coold models out there that use it with extremely good effects - so it had to be there for the F-35....hence I used the Tomcat as a testbed for this effect.
After few attempts I realized what I was doing wrong - and it was the base color of the specular map: to achieve a good looking modern-military-paint reflection you should use a very dark specular map. In the example shown in the pictures, the specular map was obtained by taking the diffuse map. darkening it by 50-70 "units" and applying an uniform alpha channel of 64 value. Obviously, if you are less-lazy than me, you could have tuned both on a per-pixel basis. Specular power was set to 30 (raising it and/or the alpha will result in smaller hotspots - which tend to highlight the mesh defects - better to avoid that IMHO).
The specular model will be part of the next update. And the F-35 will be shown (in pictures) as soon as the main texturing is complete: I am making a 4096x4096 photoreal texture for the fuselage and wings by "assembling" hi-def photos...results are good - but process is slow.
Posted by ScimmiaSpaziale at 1:32 AM 4 comments: