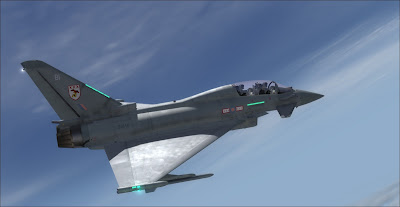 NOTE: UNLESS MAJOR ISSUES ARE FOUND, THIS IS LIKELY TO BE THE LAST UPDATE WHICH SUPPORTS FSX
Posted by ScimmiaSpaziale at 3:02 AM 1 comment: 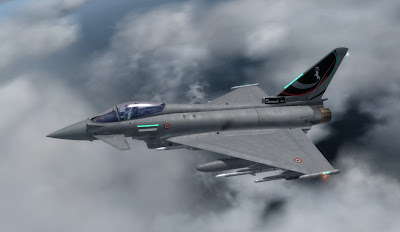 NOTE: THE INITIAL RELEASE OF EUROFIGHTER 1.22 PBR HAD A SMALL GLITCH SO THAT "REMOVE BEFORE FLIGHT" RIBBONS AND COVERS HAD A WRONG TEXTURE - FILES HAVE BEEN REPLACED WITH CORRECTED ONES, ALSO PBR "UBUNTU" MODELS HAVE BEEN ADDED FOR MULTIPLAYER.

A couple of sleepless nights playing with Physically Based Rendering (PBR) on the Eurofighter Typhoon model and here we are with another update. For those who do not know PBR, it is a different rendering technique which is supposed to simulate the appearance of 3D models on the basis actual physical proprieties of the material they represent (such as "metalness", roughness etc.). This is a relatively new rendering technogy which, in some circumstances, can provide more realistic results with respect to the traditional techniques.
Recent videogames like Red Dead Redeption are a great example of this. In flight simulation, PBR was introduced by X-Plane, DCS and (almost unnoticed) by Flight Simulator World.
Note that PBR is a generic name for the approach, and each engine has its own implementation with different results and possibilities.
PBR has recently been introduced in Prepar3D V4 starting from version 4.4 - the implementation is quite standard: materials require an "albedo" texture (its base color), a "metallic" texture (which specifies the metalness and, in P3D, also the Ambient Occlusion and the smoothness of the surface), a "normal" texture (basically the old normal/bump map) and an "emissive" texture.
In addition, P3D now allows the developers to control the visual proprieties of a material with a LUA script during the simulation - which is pretty great as it allows a number of cool tricks.
NOTE THAT PBR MODEL WILL ONLY WORK WITH P3Dv4.4 AND ABOVE.

Here are "preliminary" models of the Eurofighter with PBR. While compiling these models I also fixed a couple of minor bugs. As result the update is provided in 2 versions: a 32-bit version for FSX users and users of P3Dv1, v2 and v3 and a 64-bit version which will only work with P3Dv4.4 (you must upgrade your P3Dv4.X to v4.4 or above to use it).

The full update with PBR models for P3Dv4.4 can be downloaded by clicking HERE.

The partial update without PBR for FSX/P3Dv2/P3Dv3 can be dowloaded by clicking HERE.

Posted by ScimmiaSpaziale at 4:34 AM 3 comments: