Plans for the future and answers to some FAQs

﻿
The release of the Aermacchi MB.326 has been a great success so far. We have exceeded 2000 downloads in just few days, and I believe it is a great result (especially if you consider that this plane is surely not as popular as a Tomcat!). The perceived quality level seems very good, too.
So, people are starting to ask me what are my plans for the future... and here is what it is on my mind at the moment.

F-14D Update - First thing being worked on in an update to the F-14D. Several minor fixes / improvements, nothing too big. This could be out in a couple of weeks.

S-3B Update - Same thing for the S-3... I have plans to fix some minor defects in the current release. And hopefully I will find the time to release the AI Tanker model.

F-35ABC Update - Now, this would be, in my intentions, a bigger update which would bring the simulated version closer to the real deal thanks to the information released to the public in the meantime. This may well be a two-step update.

New projects being worked on:

Eurofighter Typhoon: On hold... I do not have time to work on this at the moment. I'll keep you posted.

And now some FAQs:

Q - Are you interested in making an Hawkeye? And a F-16 Fighting Falcon? Or why not a Sepecat Jaguar/AMX/enter your favourite aircraft here)?

A - I have carefully evaluated several proposals, and my current projects will keep me busy for at least a full year. Sorry. Then... my two cents: the Viper is the elephant in the flight simulation room. We badly need a good one for FSX/P3D, but I do not have time for this.

Q - Why aren't you working on models for DCS / XPlane / FlightGear or other simulators?

A - Because I do not have the time.

Q - ...So could I export your models and use into another simulator?

A - NO. While the models are my creations, they are sometimes based on professional meshes (under paid-for licence...this is one of the ways in which I spend the money you donate) or contributions from other authors. Exporting/reverse engineering the models by a third party would be a licence and copyright infringement.

A - Because it is just a hobby... and I am a relatively well paid professional engineer. If I had to quit my job for flight simulations that would mean a significant cut for my incomes.
Posted by ScimmiaSpaziale at 1:22 AM 66 comments: 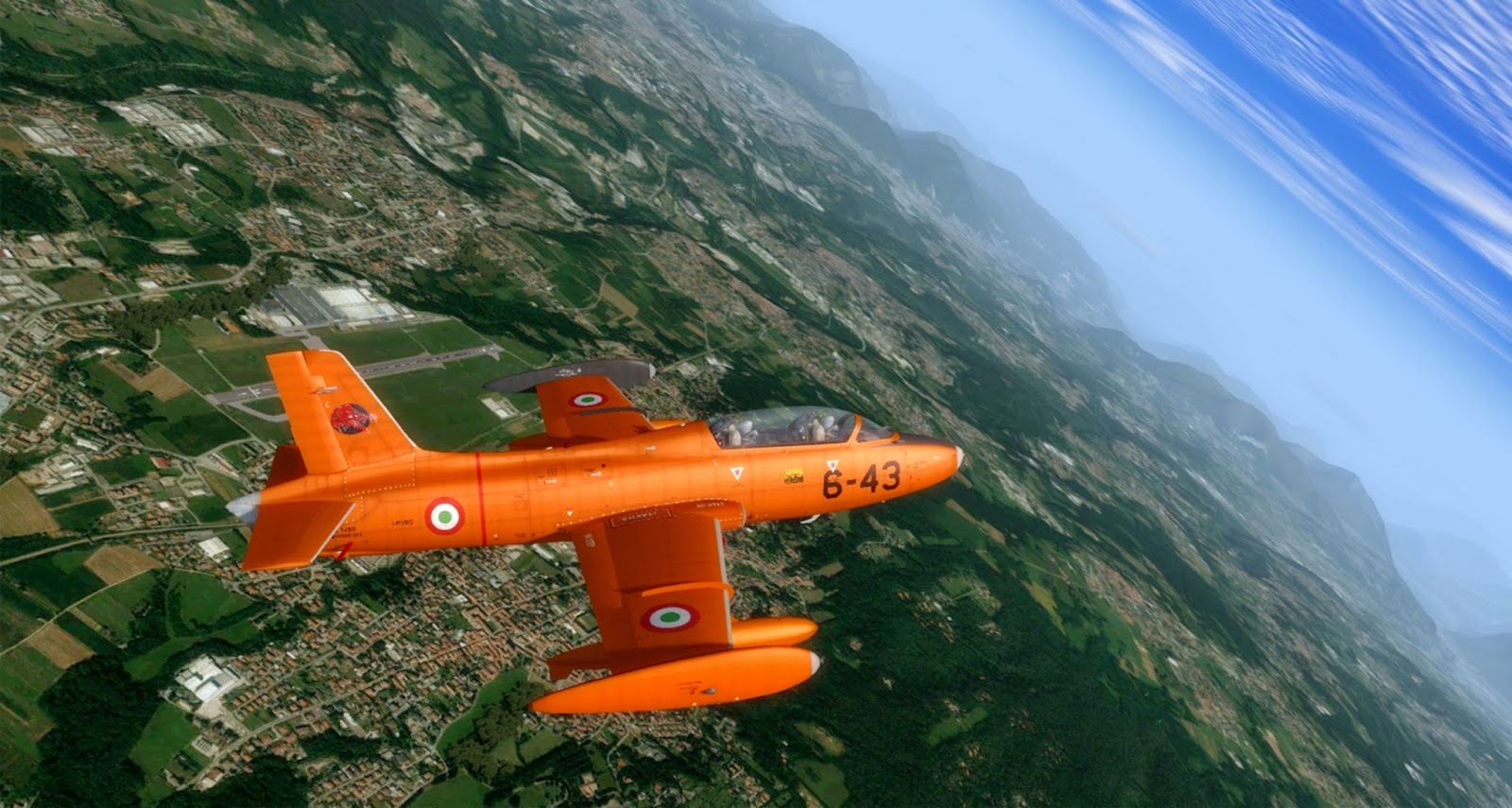 After more than one year of work, here is the Aermacchi MB.326 version 1.00 release. This is a very special model for me, as I had the unique chance to fly on the only MB.326 in flight conditions in Europe - that was my first (and hopefully not last) ride in a military jet... and needless to say it was awesome, and I completely fell in love with this aicraft.
First thing I'd like to thank Alessandro Barbarini who created the fantastic external textures I am sure you will enjoy. They look awesome, and raised the quality bar significantly.
Also, I'd like to thank Roy Holmes, for a very realistic flight model, and Mario Motta for his modules, which bring payload configuration capabilities and VACMI support, and flight testing (Mario has hundreds of flying hours in the real Macchino). Also, a big thank you to Serge Luzin who provided a great sound package, based on real world recordings (in cockpit sounds come straight from the recordings of my own flight).

The model supports BOTH Sim Skunk Works vACMI and Vertical Reality Simulation Tacpack weapon packages. By default, it is set to support vACMI - please see the documentation on how to enable Tacpack of you use the latter.

I had no time to squash all the bugs, and I am sure more will pop-up after a the release... still it should be OK as is for the vast majority of the users.
It is a "control+e" model, meaning it is not meant to provide a 100% exact simulation of the real aicraft... but you should be able to start it "cold and dark" and use it as a basic military trainer. Actually our target was to create a realistic and complete freeware rendition of this fantastic light jet... we are happy with the result, and we hope you will be too.

Have fun!
...and yes, the download link is in the side bar, as usual!
Posted by ScimmiaSpaziale at 1:18 AM 11 comments: