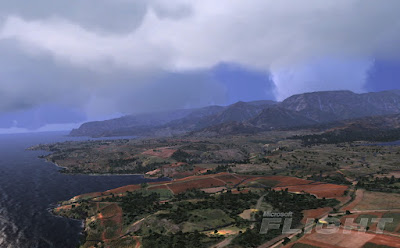 Microsoft has just published some new screenshots of Flight, along with a much awaited clarification about the Windows Live tag of the new simulator (which generated some speculation that Flight could only be used online).

The new screenshots can be viewed here .
The general opinion is that Flight looks much like FSX - and I think it is true to some extent. Yes, it looks similar... but if you watch closely the screenshots and the video shown so far, you'll notice some significant improvements - like a much better scenery "creation" and better shadows.
I mean the "syntesized" scenery -textures, rivers, coastline, roads and autogen- look definitely better (e.g. coastlines look more realistic) and less prone to some mistakes in the current FSX system (for example the roads and rivers merge much better with the base textures).
As for the shadows, it seems that the algorythm is much more realistic and shadows are much less "abrupt".

I just hope there will be a way to import some of the work done by many designers in FSX. I think it is OK to drop FS9 code compatibility, but I hope the native .mdls can be imported -or at least Microsoft could provide an .X files converter. Should not be much of a problem, as the .X file should be a "DirectX friendly" file format...and then I see the FSX Orion Maule in the screenshots...

Anyway, what we have seen so far looks like a refined FSX. Which is a good thing IMHO. But we all know what we need most: a modern, efficient code that can benefit from current hardware.
Shoul I write a wish list... well, yes, it would be quite long...but if I could just have an improved FSX that runs at full detail at 60fps with some of the most complex add-ons, then I would be happy.
In the meantime, I am still working on the Goshawk... but no significant progress to report so far - mainly due to lack of time.
Posted by ScimmiaSpaziale at 1:38 PM 3 comments:

Another quick update...and a word about facebook and emails. 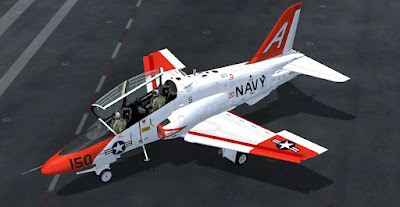 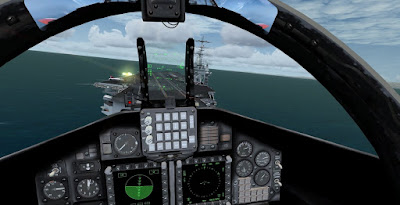 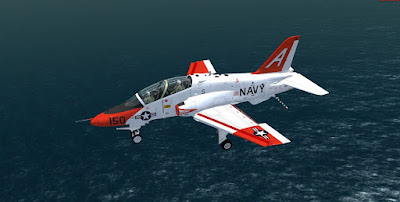 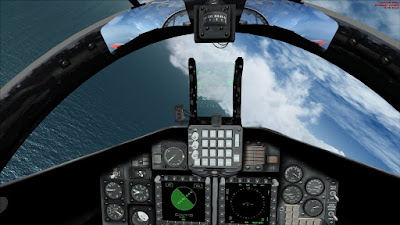 Just a quick update with some screenshots, including the first images of the new virtual cockpit. The external model is 95% done - it only needs some minor texturing cleanup and a couple of details. It is much better than the previous one IMHO, although it is not as lightweight as I hoped. The cockpit model, on the other hand, is lagging. What you see in the screenshot is what is ready so far - the main panel is ready and so is the canopy - everything else is void for the moment. Let's say it is roghly 30% done. Good news is that it is closer to the real one and uses less resources than the previous iteration - possibly making room for the instructor's cockpit too.
With the current pace, an Alpha build may be ready by the end of February or mid-March. But that is just an estimation and, as usual, it will depend a lot on the time I will have.
Then, a word about e-mails and facebook. Yes, I am on facebook *BUT* I use it to share stupid stuff with my real-life friends. I do not use it to post anything related to Flight Simulator. That is why, while I've received several frienship requests from simmers all around the world, I've always "ignored" them. My apologies for having ignored them, but please understand that my choice is to use facebook only to communicate with people I know in person - it is the only way in which I think facebook is useful and fun for me.
Also, I'd like to apologize for the delay in replying to your emails - unfortunately I do not have time to reply in detail to each one quickly. I'm doing my best - that is spend an hour or two per week replying to my personal email.
Last thing, please do not email me for generic enquiries about Flight Simulator (like how to install scenery, or how to design a plane etc.). I am sorry but I really do not have the time to reply with sufficient level of detail, and, for such questions, you'd better check Google - there are a lot communities which provide plenty of tutorials to do almost everything FSX can do.
Well, that is it for now. I sincerely appreciate your interest in my works and...well...I just wish I had more time!

Posted by ScimmiaSpaziale at 1:59 AM 6 comments: 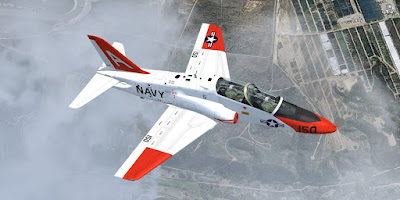 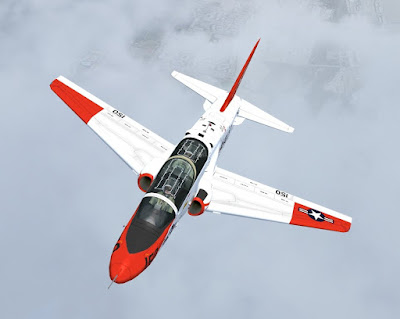 Above are a couple of screenshots I posted few days ago at Sim-outhouse... As you can see the outer model is almost done (let's say 95%). It just needs some minor details (mainly in the cockpit), some texture "clean up" and some minor animation tweaks. I have to confess am really happy about its quality so far.
I started working on the virtual cockpit and the main panel is almost done. It has been modeled directly over the NATOPS cockpit diagrams so it should be significantly closer to the real thing (although the previous one was reasonably close). I will post some pictures once a larger portion of it is complete.
For now, the plan is to keep the stock F/A-18 avionics code (HUD and MFDs), so the display will incorrectly indicate two engines and a radar (although I know that a "virtual radar" for the real T-45 is in development - i.e. a "radar simulator" for training). It would be possible to make 100% accurate avionics... but that will require a lot of time and resources.
On the good side the HUD, features some tricks I learned while making the F-35 so it looks better. I have not decided wether to make also the instructor's cockpit or not. I know it would be cool, but I want to keep the project "small" - that is the only way to deliver something.
Posted by ScimmiaSpaziale at 11:54 AM 10 comments: