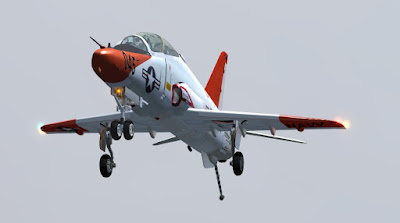 T-45C Goshawk version 1.20 - this picture shows the "approach light" (on the nose landing gear) which is now working. An orange light means "on-speed", while green is "too slow" and red is "too fast". AoA indexer in the cokpit is also working now.
I am releasing another updated version of the Goshawk right now. Filename is t45cfsxd.zip and it is about 21Mb, released at avsim.com and flightsim.com.
No major changes in this release - but some are very important for more realistic carrier operations. The Aoa indexer is now working properly (I have to confess I was not using it - and therefore I did not realize there was a major mistake in its implementation). The approach lights are working (as shown in the picture above). I know they are not completely accurate (it works basically as an AoA indexer repeater - while I'm told in the real thing only one color is visible at a time). The major graphic change is the fuselage geometry - the air intakes blend smoothly into the the main fuselage now, which is more correct.
Also, I've made some fine tuning to the flight controls (as per users' feedback) and added orange formation lights at the wingtip.
Last, but not least, I've attached a 6Mb .pdf document by Phil Thompson (that is also the man who pointed out the Aoa indexer issue). This document contains a lot of very interesting information about the Goshawk and carrier operations in general. I strongly suggest you read it.
Hope you'll enjoy it. Now I am moving fully to the Tomcat...well,unless this Goshawk release contains a catastrophic error ;-)
Here is the complete list of changes (please note that you need to move the .fx files manually to your FSX Effects folder to get the new light work properly):
VERSION 1.20 - CHANGES FROM PREVIOUS RELEASE
Visual model:- The fuselage geometry is now more accurate with respect to the real plane. - Approach light now working (as AoA indexer repeater)*- wingtip formation lights now working (mapped to "wing lights switch")*
* NOTE: To enable these features, you must copy the fx_navorange_t45.fx file in your FSX "Effects" folder. The file is included in this .zip in the Effects subfolder. Also, some lights seem not work correctly with DX10 preview mode.
Interior model:- Reworked AoA indexer (thanks to Phil Thompson)- Reworked Rearview mirrors reflections
Flight model:- tuned various control effectiveness parameters
Documentation:- Added a 6Mb .pdf document by Phil Thompson containing a lot of interesting informations about carrier operations.
Posted by ScimmiaSpaziale at 10:51 PM 3 comments:

I've finally found the time to add some detail to the cockpit....

Some areas still miss some detail, but the outer model is almost done!
Just a couple of pictures that show some progress in the cockpit area. At present, the areas that need some more work are the rudder, the weapon stations, the refuel probe and the special effects.Hopefully I'll find some time to complete the outer model in the next weekend.
Posted by ScimmiaSpaziale at 3:09 AM 2 comments:

In spite of the worldwide economic downturn, I've decided it was time to replace my Athlon 64 X2 6400 with a new processor. As I strongly wanted to contribute with my money to the wonderful consumistic way of life, I decided to invest some euros on the new i7 920.
The i7 is the new family of Intel quad-core processors. It requires a new motherboard, with a new socket ("Socket B or 1366") and works much better with DDR3 1600MHz RAM.
I'm not spending many words on this, as you can find a lot of interesting and accurate information and benchmarks in many specialized websites (there are a lot of interesting techincal facts - like the return of the Hyperthreading technology, which allows the processor to run 8 threads simultaneously).
Let's just say that it is a very expensive family of processors. The only affordable model is the 920, which is currenly priced at 330 Euros, but you must add the price of a new mobo (in my case the Asus P6T Deluxe, roughly 320 Euros) and DDR3 memory (say 150 Euros for 4Gb). Of course, these prices will drop very quickly in the next months).
So, the grand total was about 750 Euros. Wow. Not cheap. Still, you have to consider that, in many applications, even the "cheap" 920 outperforms all existing Intel Extreme processors, some of which are very expensive.
Also, the 920 is very easy to overclock*. The 920 can be easily overclocked, with stock cooling, to 3.0 or 3.2 GHz (during my tests it reached 3.5GHz once but was unstable). At 3.2 GHz it is basically performing as the i7 965 Extreme model, which has a price tag of about 1000 (one thousand) euros.
So, while it is relatively expensive, with some overclocking it delivers a very good performance. However, even this computing beast does not manage to handle FSX** completely maxed out. What I have noticed it that the frame rate is more constant. Stutters are much more limited and texture loading and generation is faster (that means less "blurries" and almost perfectly defined photosceneries). More important for a developer, you can have the modeling tools/SDKs and FSX run simultaneously and switch quickly between the applications. And exporting the model in FSX is blazing fast.
All in all I am happy.
* This does not mean I support overclocking. If you are not an experienced user you should not try overclock your system (and, in particular, you should be careful in changing the voltages in i7 systems). If you do, you do it at your own risk.
** It's a known fact that FSX is much more CPU dependant than most games. While it does not do much multithreading, some tasks (texture loading, for example) are effectively given to other cores, if available. If you are considering an upgrade for FSX, keep in mind that a 8800 GPU card is still relatively good for the sim, and FSX does not take full advantage from some newer (and extremely powerful) cards like the X295. 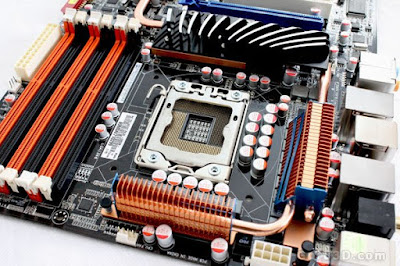 Asus P6T Deluxe Motherboard - it is more expensive than the "base" version, but cooling system design seems much better (i.e. probably better for overclock) 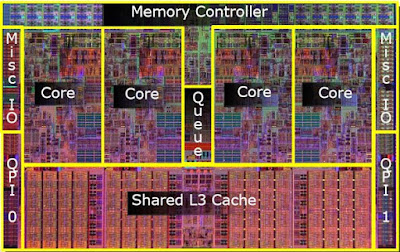 Intel i7 circuit blocks. While it is a four core processor, it can run up to 8 threads in parallel due to Hyperthreading technology (cool, but not really useful for FSX). 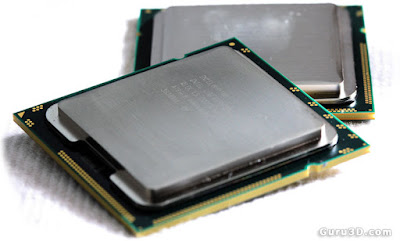 Intel i7 920 Processor - While its stock clock is 2.66GHz, it can be easily overclocked to 3.0Ghz (and beyond) and therefore match the performance of the the (much more expensive) 965 Exterme model.

Posted by ScimmiaSpaziale at 1:42 PM 4 comments: