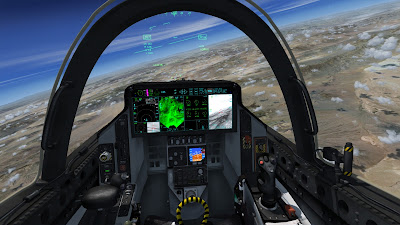 As some of you are aware of, I am working on a further (and quite extensive) update of the F-35 package.
Also, you may recall that the source files of the F-35 were lost due to a malware attack (and me being stupid having the backup files stores in an fixed HDD which was wiped out too), so it took quite a while to make significant progress - actually I had to rebuild the source files for the virtual cockpits to make some significant progress. The external models have not been rebuilt/changed...just because it would take months.
Big thing is a completely new flight models by Roy Holmes - which closely mimic the (scarce) publicly available data.

Now, I have working working models of the improved Virtual Cockpits - and I'd need some Beta testers to double check they work.

The v3.50 Beta will be deployed in two steps: in the first we'll just check that the models are OK and work as intended, however the avionic suite will be identical to the previously release version (3.23). In the second, we'll have a round of new avionic features/improvements.

In detail, the current version I have on my HD (3.50 Beta 1) features the following changes:

If you are willing to have a quick test of the latest build, to help me make sure it works as intended, here are the prerequisites:

- Have a good knowledge of my latest F-35 payware build
- Have 3.30 GHz quad-core processor and a good video card (better if 960 or above)
- Have P3D (any version) with Tacpack. I may be interested in a small number of FSX users, but please beware that NO AVIONICS UPDATES are planned for FSX. As before, a patch that simplifies avionics to achieve FSX compatibility will be provided.

If you meet all the prerequisites, you may drop me an email at indiafoxtecho@gmail.com with:
- Your system (just CPU, video card and RAM)
- The simulator you intend to use for the testing
- Proof of purchase (unless you have a complimentary copy - if so please let me know)
- Any special reason why you want to help
Thanks in advance! 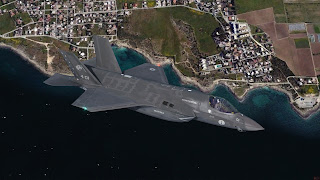 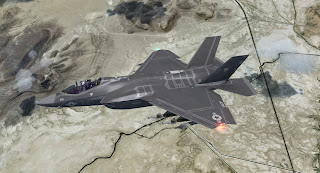 Posted by ScimmiaSpaziale at 12:45 AM 5 comments: 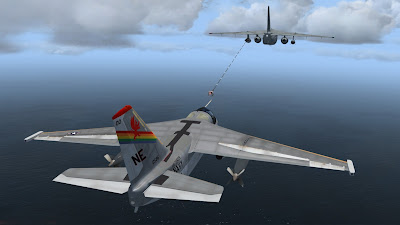 Finally here is S-3B AI Tanker model… I had this one sitting almost finished for quite a while...but never had the time (nor I was in the right mood) to complete.
It is basically a very simplified model of my old S-3, with some optimizations to be used as a tanker for Tacpack (or similar applications that can spawn a tanker or an AI aircraft).

Features of this model:
- simplified 3D model for better frame rates, optimized for viewing distances/angles of in flight refuel. No landing gear or other details modeled
- the refuel hose is always extended
- features navigation and formation lights
- multiple liveries (a selection of the ones available in the S-3 package)
- the model uses the same texture coordinates and format of the full S-3 model...so you can add more texture sets if you want to
- intended to be used as AI tanker with Tacpack, or other similar applications which can spawn an AI Tankers
...and of course it comes with recommended Tacpack settings

Aside... actually it *should* be possible to use the full S-3 model as human-driven tanker in multiplayer mission, but AFAIK it was never tested and nobody tried it.
This is a freeware release: you can download it by clicking HERE (or from the side bar).