T-45C Goshawk Released!
I've just uploaded the final package to both flightsim.com and avsim.com.Look for T45CFSXA.zip in the file libraries in a day or two.
It's been a very long and complex project. I had a lot of fun and I hope I will find the time to keep the same quality level in future projects. Hope you'll like it.
Posted by ScimmiaSpaziale at 12:11 PM 1 comment:

This is how the final exterior model looks... 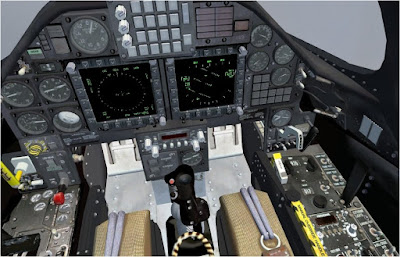 ...and this is the final interior model.

I've just finished making the changes and improvements driven by the feedback by the beta testers. I think the overall product quality is significantly improved.

Most relevant changes were:

I'm making the final touches and will post to Flightsim.com and Avsim.com in the next few days. It will be FREEWARE. While I think it is on par with professional add-ons, and while I spent a lot of time and efforts doing this, I wish to keep the hobbies separate from the businness.

Posted by ScimmiaSpaziale at 2:53 AM No comments:

Yesterday night (well, properly it was today early morning) I've released a (sort of) beta version to volunteer test sim-pilots. Above it is how it looks...the outside model is almost unchanged, while the virtual cockpit is finally (visually) complete.

I think the cockpit is reasonably close to the original. As I could not make a working AoA needle, I 've replaced it with a G-meter. Also, many warning lights are inop and I've also moved some of them...but apart from these details, I think it is Ok. Well, most switches are inop right now...but I am trying to see what I can do to add functionality to the cockpit.

I am also trying to work out a checklist that is both as close as possible to the original but also manageable by the average sim (and the simmer).

The instructor virtual cockpit was dropped. It is doable, but would have made the 3D model even bigger (and it is already very heavy...) and would have been difficult to manage.

The only major thing that is undecided is the big question: payware or freeware? It started as a freeware project. I do not want my hobbies to become work as: 1) I already have a job 2) if you do these kind of things for profit you end up doing what the market ask, rather than what you would like to do.

On the other hand, the work on this project has been very time consuming. And time is money. And I may need some financial reasons to keep doing such big things for FSX. To be or not to be....

Posted by ScimmiaSpaziale at 8:38 AM No comments:

Below are a couple of screenshots of the work-in-progress T-45C Goshawk.
A couple of refinements were added to the the exterior model (some missing detail on the landing gear and tweaks to the fuselage and the cockpit) but it is 99.9% done and working. Except for the launch bar that it is not animated (can't tell why it is not working).
The model is fully SP2/Acceleration DX10 preview compliant, but while blooming is definitedly better in DX10 than in FX9c, some polygons appear to be uncorrectly shadowed. Well it is a "DX10 preview" so I guess it is OK that something is not working perfectly...

Another Goshawk carrier landing in FSX:Acceleration!

As for the interior model...well, I did some progress. Now the main panel is done (except for the AoA indicators, clock and ADI which are not working as expected). All the instruments are dynamic 3d models (no 2D xml gauges, except for the displays which are aliased from the FSX:Acceleration Hornet). Do not expect a 100% working cockpit. It will be OK for carrier operations. This is a screenshot of the cockpit as it is now (a lot of switches missing, pedals yet to be done, more work needed on the canopy and seats).

Flight model is ok, not great. Needs some tweaking. The plane behaviour is generally fine, and handiling is nice (but ailerons are not as effective as they should be). Carrier landing is relatively easy (and easier than the F/A-18 I think) but you need to fly 10-15 Kts faster than the real thing. I'm working on this too.

Ah, I may need the help of Beta test pilots. Not sure if I will do a proper Beta test, but if I do I may be looking for virtual pilots with some experience. Knowledge of carrier operations and ability to install add-ons manually is a must. If you are willing to help, drop me a line at dino_cattaneo@libero.it (and specify T-45 in the subject).

Posted by ScimmiaSpaziale at 12:52 PM No comments: