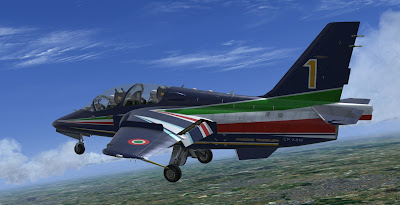 
While the S-211/M-345 has been my test bed for PBR technologies, I've never found the time to properly package the resulting files into a coherent update...but I decided to dedicate some time to release this update for a number of reasons.
For one, the S-211 has been also developed for other platforms including X-Plane 11... it is basically done, but needs improvement on the flight model and then some further testing will be needed. XP11 has a very neat PBR implementation which looks cool… you can see some photos on my facebook page.
Speaking of other platforms, I have just received a notice that AFS2 is being updated and the update can break the compatibility of the S-211... Right now it is still working, but if is breaks I will fix it when I'll have some time.
Anyway, here is the change log for the Prepar3D version. NOTE THAT THIS UPDATE IS COMPATIBLE ONLY WITH P3Dv4.4 AND ABOVE. If you install it on previous versions of Prepa3D or Flight Simulator, you will not be able to load the plane in the sim anymore...and you'll have to reinstall the base package.


CHANGE LOG
Version 1.20 - 23/05/2019
THIS UPDATE IS COMPATIBLE ONLY WITH P3D V4.4 AND ABOVE
- Redone all external models and added textures to support PBR technology

The update can be downloaded by clicking HERE or from the side bar.

Also, few months ago Leonardo made the first flight of the first M-345 from serial production. The aircraft is a little different from the demonstrator and the prototypes that I have depicted. There are a number of changes which you can see in the photo below, and which I'd like to implement some time in the future. The major changes are:
- New nose shape (shorter than the prototype, closer to the S-211 nose)
- New wing tips
- Addition of formation lights
- New Landing gear
- New auxiliary air intakes and exhausts
- New LED landing lights
- New panelization of the fuselage
- Adoption of MK-16 ejection seats
- Different positions of antennas and sensors

…these are not big changes, but some of are quite annoying to make. But I'll do them when I will have some more time. 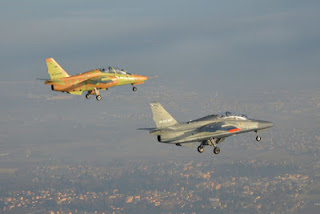 On the left (in primer), the first production aircraft, on the right (grey livery) the prototype.

Posted by ScimmiaSpaziale at 3:08 AM 2 comments: