Eurofighter Project (and a couple of notes on DCS and other things)... 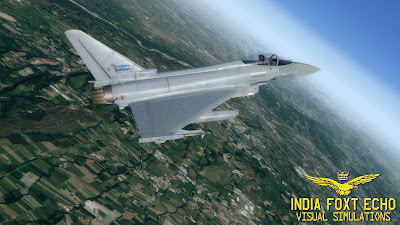 A quick post to officially introduce the new Eurofighter Typhoon project I am working on to people which may not have a Facebook account. The main scope of this project is to create a detailed Eurofighter model for use in FSX / P3DV2 / P3DV3 environment - including support of Tacpack for weapons functionalities. This is not an easy task as most of the data on the Typhoon is still classified. I managed to get my hands on some very detailed avionics documentation, but performance data is hard to find (and will be guesstimated). I also had the chance to test the EADS rapid-deployment simulator of the Typhoon... which was very interesting in terms of handling (although I have no idea on the actual dynamics accuracy as it is a simulator conceived for area familiarization).

Here are the main features I am working on:
- Highly detailed visual models (external and VC)
- Realistic (although guesstimated) flight model and dynamics
- Realistic avionics (at least for HUD and MFDs), and pilot interface including BAe Striker HMD Helmet
- Support for Tacpack weapons (AIM-9L/AIM-120/GBUs)
- Realistic procedures based on real-world checklists

Aside, I'd like to implement also other features...but these are kind of "nice-to-have" things...but I cannot confirm them at the moment:
- Support for IRIS-T and ASRAAM missiles
- PIRATE implementation (most likely for P3Dv2 / v3 only)
- "Naggin'Nora" implementation
- Custom sound package based on real-life audio samples

At the moment, the external model is almost complete...but still unfinished.
I do not think we'll have a Beta before this summer... so release may well be in August/September.
...below are some other screenshots of the latest build.

DCS Compatibility:
I have received several emails and messages asking for DCS support and long story short DCS support will not happen, at least in the foreseeable future. For one, I do not have the time. Then DCS does not offer an open, royalty-free and publicly accessible SDK and requires developers to be highly qualified and acceptance of very stringent requirements.
Note that this does NOT mean that you are entitled to try your own conversion and share them. Sure, you can do whatever you want for your personal use, but converting and than sharing the models and artwork or other stuff is not allowed (see the reasons why below...).

Other Simulators...and exporting my models:
I have also received requests to support other simulators (e.g. FlightGear and XPlane)...but again, I lack time and resources. Then there are a number of users that converted the data of my files and want to share them on the Internet. Again... THIS IS NOT ALLOWED - and it is explicitly forbidden in the documentation of my projects.
The main reason for this is not that I am jealous of my work or anything like that...but the fact that most of my project contain data and artwork from a variety of sources: there is a lot of work from yours truly, but there is also stuff from contributors and (most important) vendors. My models or parts of them are often based on commercial data which I paid for and it is quite expensive. You cannot use them in your projects - as it is a copyright infringment. Full stop.

Project updates:
As usual, I am working on updates to all of my projects... I have spotted a minor flaw to the latest T-45C package, and I'll relase an update which will also contain some special files for cockpit builders. The Military Avatars package and the F-35 also need some bug-fixing... although they have very minor flaws, and there are no red-alerts.
Sooner or later I'll also need to release the long-awaited Viking update.

Future projects:
A quick recap of other stuff I'd like to work in future... but God knows when I'll have time to work on it. And then I am an atheist... so this is more a "wish list" than actual projects:

MB.339 - I have an extrenal model 60% ready, but needs textures...and then there is no VC at the moment. On the good side, flight model and sound package could be reused from the MB.326.

So...as you can see there is A LOT of stuff going on. Much more than what I can actually handle... So we'll see. For now Eurofighter Typhoon is the top priority. 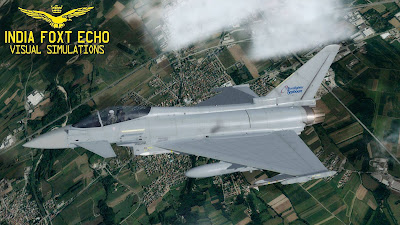 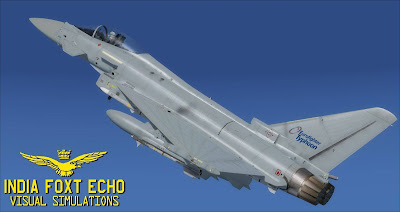 Posted by ScimmiaSpaziale at 11:32 AM 21 comments: