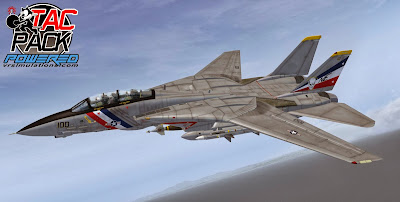 As discussed on my facebook page, here is a minor update to the F-14D which fixes some minor inaccuracies that were both annoying and easy to fix - also, I've been working with VRS to solve the Tacpack carrier navaids issue. There are still some annoying bugs here and there, but this release should be good for a more widespread distribution. Release notes are as follows:


Just to clarify the note on the carrier navaids, carriers in Tacpack are spawned with specifc, Tacpack driven Navaids (although they may have their own "embedded" in their mdl files). In the Tacpack "generic" implementation works as follows: the NAV1 active frequency should be tuned to the Tacpack Carriers TACAN equivalent frequency (MHz), while NAV2 should be tuned to the ILS frequency of the boat.
To make things a little easier in my implementation, you should tune NAV1 to the Tacpack Carrier TACAN, and then, if you are within 20 miles for the boat, NAV2 is automatically adjusted to the ILS frequency of the boat. Tacpack specific navaids will ONLY show in the HUD.

Download link to version 2.11 is HERE.
Posted by ScimmiaSpaziale at 2:26 AM 11 comments: 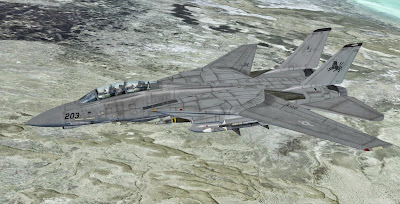 Given that I will not have much time for FSX in the next few weeks, I have decided to pack the latest build as it is and release the F-14D version 2.10 right away.
This version has not been tested as long as it should have been...and I am sure it is plenty of bugs. On the other hand, I simply will not have much time for the next month or so... so here we are with version 2.10.
The big thing, as you are probably are aware of, is the Tacpack support - which is more or less on par with what I provided for the F-35 (hopefully!).
Please note, however, that the F-14D has MUCH less automation than the Superbug and the Lightning II... hence it requires you to switch to the Rio cockpit from time to time.
Also, please HAVE A LOOK AT THE MANUAL. At least the Weapon Systems Reference Guide - some switches need manual operation for some systems to work!

For the moment, please DO NOT upload this file anywhere else. I'd like to be sure it is free from major bugs before it spreads too much over the internet...


Posted by ScimmiaSpaziale at 3:12 AM 18 comments: 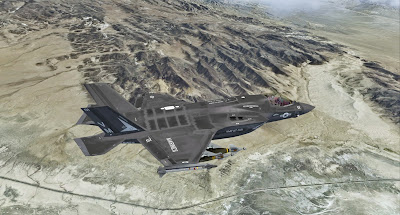 Here is the much awaited F-35 update for FSX:Acceleration which also supports the Tacpack (version 1.4.0.8 or later required).
For the moment, it will only be available on this blog - in order to check it works correctly. Most likely there will be bandwith issues with Google Drive... anyway, as soon as it is confirmed that it works as it should, it will be uploaded at the usual repositories too.

NOTE: FROM THIS RELEASE (2.30) A LIMITED INTEGRATION WITH VERTICAL REALITY SIMULATION IS PROVIDED. VRS TACPACK VERSION 1.4.0.8 OR LATER IS REQUIRED FOR FULL FUNCTIONALITY, BUT IT IS NOT MANDATORY FOR AICRAFT OPERATION.
Posted by ScimmiaSpaziale at 3:35 AM 35 comments: