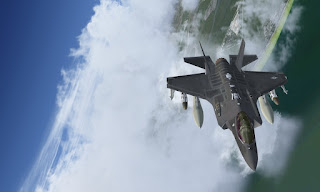 
This is a placeholder post for the Beta 2 testing of the F-35C project - if possible, Beta testers should add their comments to this post so that we can have a unique repository for the CR's.
A draft user manual will be posted here as soon as it will be available (provided it will be ready in the next week or so).

IMPORTANT! Testers, while evaluating the F-35 please consider that:

1) MICRO-OSCILLATIONS WHILE ON THE GROUND [FM]. On most load conditions, whiel sitting still on the ground, the plane suffers from micro-oscillations which may lead to a heading change. This seems to be due to an FSX contact points instability - In version 1.0 was fixed by changing the gear contact points, but same fix does not work on 2.0, unless severe steering instability is reached. STATUS: OPEN. ACTION TBD - Anyway I am not willing to sacrifice general ground handling to solve this.

4) MISSING C++ Runtime refenece in documentation [MISC] - Reminder for me: add reference (or inclusion) of the "Visual C runtime" in the manual - in its absence STOVL functionalities won't work. STATUS: OPEN

5) sswvtol.dll TYPO [MISC] - I made a typo on the name of the .dll. Sorry for that, my bad.
STATUS: CLOSED. Fixed in the WIP Manual.

6) HMD Projection plane visible under certain conditions - This seems due to DX shader effects under some specific weather and light conditions. STATUS: CLOSED - ACTION: The issue was not solved but was mitigated by creating small round edges at the corners of the projection plane.

B1) RIGHT/LEFT SIDE OF FCS PAGE DIFFER [VC]. STATUS: CLOSED. ACTION: copied .xml code changes from MFD1 to MFD2 (forgot to do that).

B3) TAILERONS TO MOVE DOWNWARD IN STOVL MODE [OM]. STATUS: CLOSED. ACTION: Changed external model, added animation chain. Tailerons now rotate by 12.5 degrees during STOVL conversion. Note: most videos of the real plane show this, but not all. Also, some videos show that the inner gear bay doors open while in STOVL/hover although I've mostly this in BF-1 test flights and does not seem to be the case in the latest footage. Still, it would be much more difficult to add...

C4) UNABLE TO ACCELERATE OVER 600kts. [FM] - Even if the user unloads the plane, the flight model does not allow to exceed approx. 600kts. - This is due to added drag to the FM which was introduced to better simulate the orndance. It may be better to lower the drag coefficient.  STATUS: CLOSED. Fixed with new FM.C5) PROPOSAL TO MOVE VIEW POINT AND CORRECT FM TO HAVE A PERFECT MATCH WITH LM SIMULATOR [FM]. As per JR suggestions it is possible to have an almost perfect match to real F-35 simulator on carrier ops, but changes should be evaluated carefully on the flight envelope. STATUS: CLOSED. Changed as per request.

Color key:
Green - issue solved, or mitigated to the point is acceptable or not perceived by most users.
Yellow -issue open, and could be perceived as product defect by many users. Awaiting action or investigation. Or issue open, mitigated to the best of my knowledge but will still be perceived as defect by users. Or issue open but appears easy to fix.
Red - root cause not identified as of today. Or the problem is beyond my knowledge or impossible or difficult to solve.
Posted by ScimmiaSpaziale at 2:07 PM 50 comments: 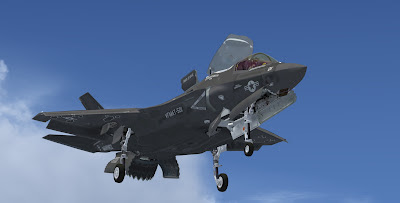 *******
UPDATE - JUST BEFORE PACKING THE BETA, I SPOTTED A BIG VISUAL BUG IN THE F-35A MODEL... NOW IT IS FIXED, BUT BETA RELEASE IS DELAYED.
********
I am completing the Beta 2 version of the F-35 project. It will include F-35A, B and C versions.
While the three variants are at different stages of development, I believe they are all good enough for testing.

Once ready, Beta 2 will be automatically sent to all contributors, Beta 1 testers and additional recipients I have added in the meantime.

Should you want to apply for the Beta testing, please drop me an email at indiafoxtecho (gmail) com. Please add a F-35ABC Beta in the subject (or anything that will help me sorting them out) and a brief description of your systems and main add-ons...and which kind of simmer you are, if you wish so - keep it short - I just want to better understand your perspective and -in case- suggestions.
Also, let me know if there is a specific version you are interested to test (A, B or C).

Due to my time constraints, I will not accept many testers - it will be impossible for me to collect a large amount of information.
There will not be a particular rule to chose the testers - I will mainly pick different systems/simmer "types" combination...just to have varied feedback. Should you not be picked - well, I am sorry - I just cannot accept more than few testers.
Last, to report bugs, please use ONLY the methods described in the email. Thank you all in advance!
Posted by ScimmiaSpaziale at 8:11 PM 3 comments: 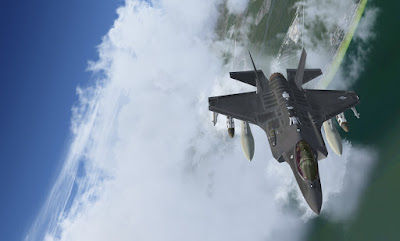 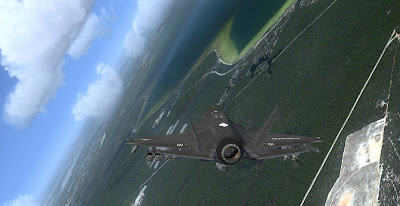 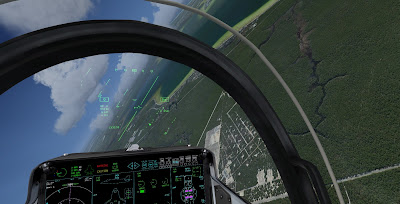 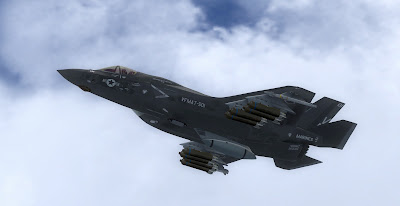 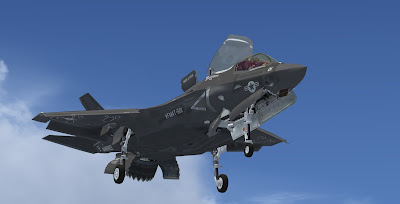 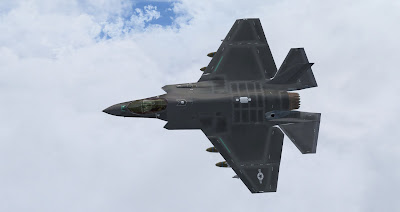 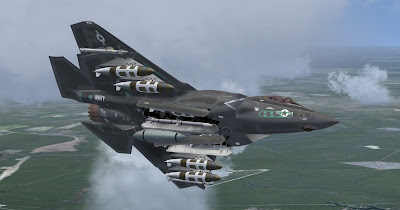 Above are some images of the F-35A, -B and -C flying nearby Eglin AFB... Unfortunately I do not have much time to work on this project, nor I will for few days... but as you can see, Beta 2 is not far away. Maybe it will take a couple of weeks.
Posted by ScimmiaSpaziale at 2:43 AM 9 comments: 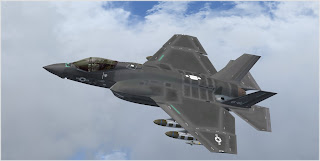 In the past few days I did some significant progress with the F-35C... at the moment the external model is 75% done... so I started making some carrier trials - which were OK (although the gear dynamics need some tweaking).

As the real F-35C development is somewhat late compared to the F-35A and B (some of which have already been delivered to Eglin AFB), I have decided to depict the F-35C in the CF-02 (second system development aircraft) livery - specifically with some parts with the typical the greenish primer color showing here and there. Some may not like it... but I think it gives a nice "flight testing" vibe to it. BTW afaik, real F-35C has not been flown with external loads yet... But, as you know, this whole F-35 project has a lot of simplification and a tiny bit of fiction...
﻿
Posted by ScimmiaSpaziale at 2:36 AM 11 comments:

A-B-C nearby Fort Worth 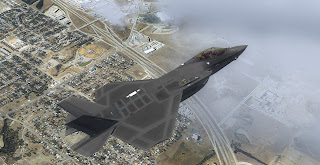 Just some pictures while I was preparing the thumbnails for the aircraft selection menu - F-35A, B and C flying over Fort Worth.
There is still some work before Beta 2 is ready - it will only feature -A and -B models.
The -C you see is the results of some "Frankenstein" modeling I am doing. Looks promising - but there is a lot of work to be done (much more than what it may seem judging by the photo).

By the way, I am seriously considering a freeware release. This project, like the previous F-35A, started as payware in order to mitigate the expenses of the professional 3D meshes I acquired to have a better visual fidelity. Now, the size of this project grew way too much for a hobby - and the amount of money involved is now surely relevant for the taxes - so I'd be required by law to face some relatively obscure (to me) burocracy and accounting... which I am not sure I have the time to follow without impacting my "regular" job and spare time. I will have to think about it carefully. The main thing is I do this for fun. And I want to continue doing this for fun. If I will be able to do this without loosing too much money (or even earning some), fine. Otherwise, it's fine all the same. But that is another story - the focus at the moment is deliver a good plane to FSX. ﻿
Posted by ScimmiaSpaziale at 2:35 AM 17 comments:

Hovering in the F-35B

Approaching LHA-4 in a stable hover thanks to Rob! 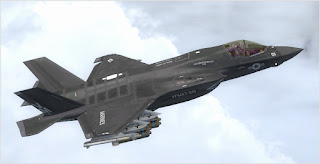 A very rainy labor day brought some major advancements in my F-35 project... actually I've been working almost non-stop for 12 hours on it today... Not sure if it is a good thing.
Anyway, the integration with Rob Barenrdregt's STOVL functionality is done and...works like a dream! I spent a lot of the weekend hovering here and there and it is a lot of fun.

Also, the F-35B is almost ready for Beta testing - I added a lot of missing details and completed the texturing and I have to confess I am quite happy with it.

And I've also modeled the AIM-9X and rebuilt the F-35A models with it. And I've also figured out a way to model the F-35C in a reasonable amount of time (with a little artistic licence on a couple of details... which I am sure someone will notice in seconds, but it may be a fair copromise...it is worth a try IMHO).
Posted by ScimmiaSpaziale at 1:27 AM 12 comments: