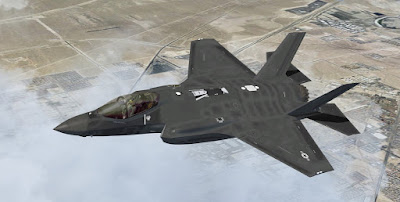 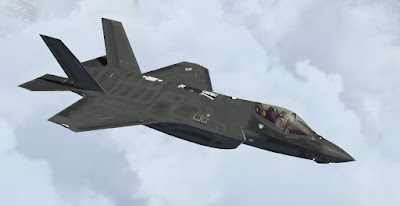 As announced previously, the "old" version of the F-35 Lightning II has been withdrawn from sales on SimMarket. I'd like to thank all the customers, contributors and supporters - it was my first payware project and, for my goals, it has been a huge success.

I have no idea when the new one will be available, but the test version will surely be ready within February.
It is basically a graphically improved version of the previous one - so do not expect additional functionality. Well, actually some "visual treats" are being left out (like wheel chocks and "remove before flight" ribbons) in order to have a much better 3d detail and accuracy.
I am quite happy of the compromise between level of detail and performance at the moment - on my system it is slightly "heavier" (in terms of fps) than the previous model... but not that much. Fair trade, IMHO, if you consider how good the new mesh looks.
Cockpit will be almost the same as the previous version - just minor tweaks here and there. I am considering to remove the "full (half) screen" radar mode as it seems to have several bugs due to the way it is implemented. Removing it will help the perfomance a bit... I am not sure.
Flight model will not change.

I am also considering to add the F-35B and F-35C to the package.
If so, the F-35B will be uncapable of VTOL operations (will only support STOL slow-speed mode...I think it is called "mode 3" on the real thing but I may be wrong).
As for the F-35C... you may already have seen some pics in this blog. Latest build looks better...but the new F-35A has a higher priority being the "base" model.

In terms of pricing, it will depend on the features... for sure it will not be expensive and it will be close to the previous version. Few Euros/Dollars more if all three models are included... or a few less if it will have only the F-35A.
I will also try to apply discounts to the customers of the previous version - afterall most of the cockpit and the flight model are the same, and you have already paid for it... Let's see what I can do.

Posted by ScimmiaSpaziale at 2:03 AM 3 comments:

First screenshot of the new F-35A

A quick update on the new version of the F-35A I've been working on in the past few months. It will be payware (on the cheap end of the spectrum) and will be developed for FSX and Prepar3d.
I will soon withdraw the current version from SimMarket.
I am considering building a full "JSF" experience, that is a package with F-35A, -B and -C...but the actual size of the project is still tbd. As you have seen a -C version is in the works, but -A has a higher priority for me (as it is the "base" version). I'd love making the -B and it should not take that much once the -A is ready...but it requires some money to acquire the mesh and I'd like to evaluate a little more the actual revenues, as I have already spent some money on this project...

Anyway, I'll soon post my thoughts on the outlook of flight simulation (and flight games in general...for those that are not willing to think to Flight as a sim). Let me just say that if Prepar3d 2.0 delivers 64bit code, DX11 and full FSX compatibility and a reasonable price for some sort of "home" licence that would be my preferred platform.
Posted by ScimmiaSpaziale at 2:09 AM 2 comments: 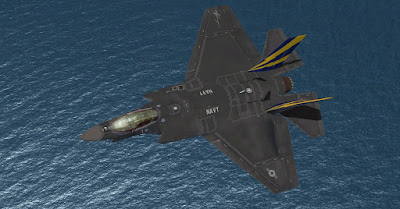 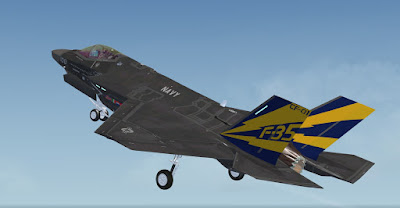 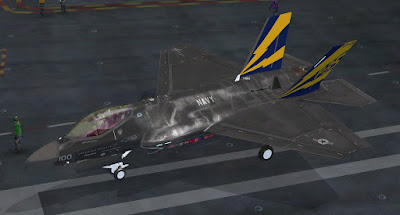 Happy New Year! I hope you had a great 2011 as I did, and I wish you all the best for 2012.
The new year will most likely bring the new version of Microsoft Flight Simulator...which will make its ist public appearance in few weeks - I am anxious to see and know more of it, but what I saw so far, although not revolutionary, is quite good.

In the meantime, as I had some spare time during the holidays, I did some work on the F-35 - mainly due to the fact that new, low poly, 3d data for the F-35C was available and my project of the new high-fidelity F-35A was really nice to look at but way too low on performance.

So here is the F-35C....VERY preliminary shots. The ambitious project I'd like to pursue would be to have a new payware package including this F-35C and a new F-35A (designed to the same standard)....and, why not, and F-35B too. BUT it may be too much for me to handle... so I have not decided yet. Let's see.
Aside, my long term projects, the T-45C will be converted (provided that the conversion is doable) to Flight and remain freeware. While the new F-14D...I do not know. It is in a good shape...but I don't know when it will be ready. It may go straight to Flight... Let's see.
Posted by ScimmiaSpaziale at 8:41 PM 14 comments: