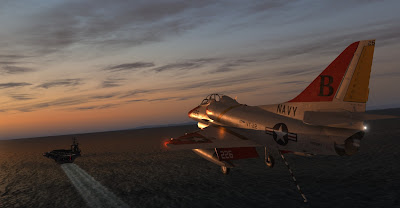 As per my usual procedure, here is the post meant to collect the feedback from the TA-4J Beta Testing. This is (almost) constantly update with the "accepted" bugs and suggestions, color coded to reflect their status. "Accepted" means that I have understood what the testers reported, I could replicate it (or at least be sure this is not a misinterpretation or an error from the tester) and I have "accepted" it as a item to be addressed.

The TA-4 required external air power to start the engine. You can make the "Huffer" appear by selecting it in the configuration menu (SHIFT+4), but it will only appear if the aircraft is not stationary and parking brakes (wheel chocks) are not applied (icon is greyed out otherwise). You can make it appear also by clicking on the external air power connection door.
To start the aircraft you will need also electrical power (see below)

Fuel System
The fuel system is simulated in some detail and requires a good understanding of the real world one to be operated.

Weapon System
In order to fire a weapon, you must:
- Select the type of weapon you intend to use
- Power the relevant pylon
- Set the Master Arm Switch to ON
- Press the TRIGGER for forward-firing weapons (guns, rockets and missiles) or the PICKLE button for bombs.

Radio and Navigation System
- Combined Radio/ADF selector: will work as COM1 if set on primary, COM2 if set on both, ADF if set to ADF
- The NAV computer is not operational, but works as a GPS display
- The BDHI pointer 1 will always show the NDB station
- The BDHI pointer 2 will display: the next WP in the flight plan if set to NAV COMPUTER or the TACAN station if set to TACAN
- Note that TACANs are implemented in the legacy FSX version, that is channels are converted in frequencies and used as NAV1 instrument.

Flight Model
As far as we can tell, the flight model is pretty close to the real deal...but I can already see some of the comments about the roll rate. The A-4 family is famous for having an exceptionally high roll rate, and you can read several Pireps or see video interviews of pilot claming that the peak roll rate is 720°/sec. However (apart from the fact that rolls of more than 360° are explicitly forbidden by the flight manual) actual data points you can find on the internet seem to indicate that the real roll rate was lower (highest value measured I could find is 410°/sec). Current flight model is set to for a a peak of about 350°/s, which seems to be a realistic figure.

The Beta model is NOT intended for repainting. A full paint kit will be available at the release.

TO DO LIST
Actions that have already been planned but are have not been implemented:

If you want to, you can use THIS template as guideline/checklist for the tests

The preferred way to report bugs is to post a comment on this blog (so that everyone can see it). Otherwise, email messages with "TA-4J Bug Report" as subject are fine.
It is better, before posting, if you check if thebug you have spotted is already in the list below or in the comments.
Bugs or change request are evaluated ASAP and, if confirmed and accepted, added to the list below.

TA4P3DFM01 - Ground steer radii too big? STATUS: to be verified. Modified to 70 degrees - CLOSED.
TA4P3DFM02 - Request to implement proper NWS
TA4P3DFM03 - Excessive fuel burn rate (potentially a bug in the fuel system)? STATUS: WRITTEN OFF (tester error)
TA4P3DFM04 - Speed brakes do not completely rectract (possibly a bug in the speedbrakes blowback feature?) STATUS: TO BE VERIFIED. Checked. Spoilers open/close correctly. Claim of tester was probably due to the fact that the time required for the light to go off is relatively long if the pilot uses digital spoiler control. Changed light condition so that the caution light turns on only if spoiler is deployed more than 25%.
TA4P3DFM05 - Tendency to tipover during arrested landings. - FIXED with better tailhook configuration settings.

TA4P3DMISC12 - Control+SHIFT+W "Weapons Reload" shortcut does not seem to work. Works as advertised in the program (but you must be in VC).
TA4P3DMISC13 - Suggestion to include the TACAN Frequency conversion table. Added to both pocket cheklist and manual.
TA4P3DMISC14 - Suggestion to allow the user to select either the P3D or FSX TACAN system
TA4P3DMISC15 - Manual: LoP Para 3 line 1 "and" misspelled. Fixed in manual.
TA4P3DMISC16 - Manual: LoP Para 4 line 2 "of" missing. Fixed in manual
TA4P3DMISC17 - Manual: Para 1, missing words "of the aircraft in"
TA4P3DMISC18 - Igniters and other spelling errors present (Note, most of the manual comes from NAVAIR 01-40AVD-1 "NATOPS FLIGHT MANUAL NAVY MODEL TA-4F/TA-4J through an OCR software from a not-so-great source file, so multiple misspelling errors are possible). - FIXED TO THE BEST OF MY POSSIBILITIES.
TA4P3DMISC19 - Potential errors in the NAV1 to TACAN conversion decoding - STATUS: SOLVED: minor bug found in VHF to TACAN conversion code. NOTE: it may also affect other aicrafts of mine where the TACAN is not set directly, but throgh VHF frequency and then converted.

Posted by ScimmiaSpaziale at 12:02 AM 58 comments: 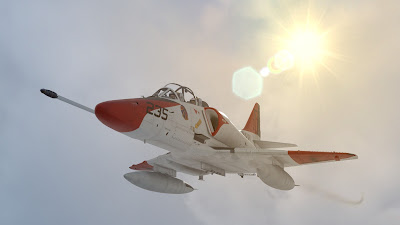 I know that many of you were waiting for this so here we are with the Beta Test application post of the TA-4J for P3Dv4.4 and above - so, if you are willing to help with the testing, in this post you will find the instructions to apply.

A brief introduction to the project: this is the first project I have designed from the ground up to support specifically P3Dv4.4 / P3Dv4.5 features and above - basically with no regards with the limitations of the FSX compiler. At the moment, I plan to try and downgrade the model in future for FSX compatibility as a separate project… but early attempts failed and it is not granted that it will ever come to FSX.

As with any simulation, it is basically impossible to include each and every feature of the real aicraft, but my hope is that this may be the most complete rendition of the TA-4J to date (fingers crossed).
I am sure I left something important out...so, if you are selected for the test, you are encouraged to suggest additions and improvements.

As usual, I am looking for testers with various level of aviation experience and skill, but I am looking in particular for users who know the TA-4J aircraft and a passion for naval aviation.

As usual… the Beta tester for my projects is not a paid position, by any stretch of the imagination: you do it just for the fun of doing it.
If you are willing to help, send me an email to indiafoxtecho.gmail.com - the email shall contain:

- a BRIEF description of your system (no need of minor details, I just need CPU type and clock, RAM, video card and video memory)

- a brief description of your real world flight experience (if any) including (if any) your knowledge of the TA-4J Aircraft (note… the Beta is open to everybody: from teenage desk flyers to WWII aces - I just need to know who I am talking with!). No need of long and detailed stories...just a line or two will do.

- your experience with Prepar3D v4
The topic of the email shall be "Prepar3D v4 TA-4J Beta Testing" (note...I thought this was an easy requirement, but apparently it is not...but it is very important: it helps me a lot sorting the messages and it shows that you can comply with instructions).

Note it may take 2-3 weeks to reply and provide a download link… so be patient.

Posted by ScimmiaSpaziale at 9:33 PM No comments: