As promised, and due to the large number of requests, I have created an FSX version of the TA-4 Package (which should work also on P3Dv2 and v3).

With respect to the P3Dv4 version:

- There is no backseat/instructor cockpit

- The 3D materials are "traditional" (as opposed to PBR)

Apart from some other minor details, pretty much everything else is the same as the P3Dv4 version...including flight model, options and system simulation.

Before releasing the package, a quick Beta test is needed, but it will be limited to few testers.
If you want to apply for the testing, please send me an email with "TA-4J BETA FSX" as subject and specify:

- which version of FSX you are using

Ideally the testers should have flown the P3Dv4 version for a functionality comparison.

Please find below the usual Bugs/Change request list (I expect it to be EXTREMELY short as we solved a lot of bugs in P3Dv4...fingers crossed)...

Posted by ScimmiaSpaziale at 1:15 PM 6 comments: 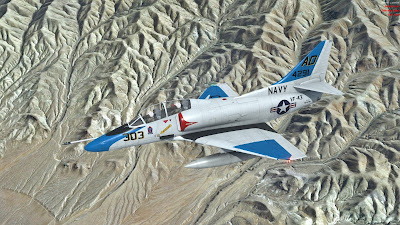 The TA-4 package has been updated to version 1.07...here are the full release notes:

There is a small mistake in the VF-43 textures, as the high visibility roundels are missing from the wings… updated textures can be downloaded HERE
Posted by ScimmiaSpaziale at 1:18 AM 1 comment: