Minor, and hopefully final, update to the F-35 and F-14D projects 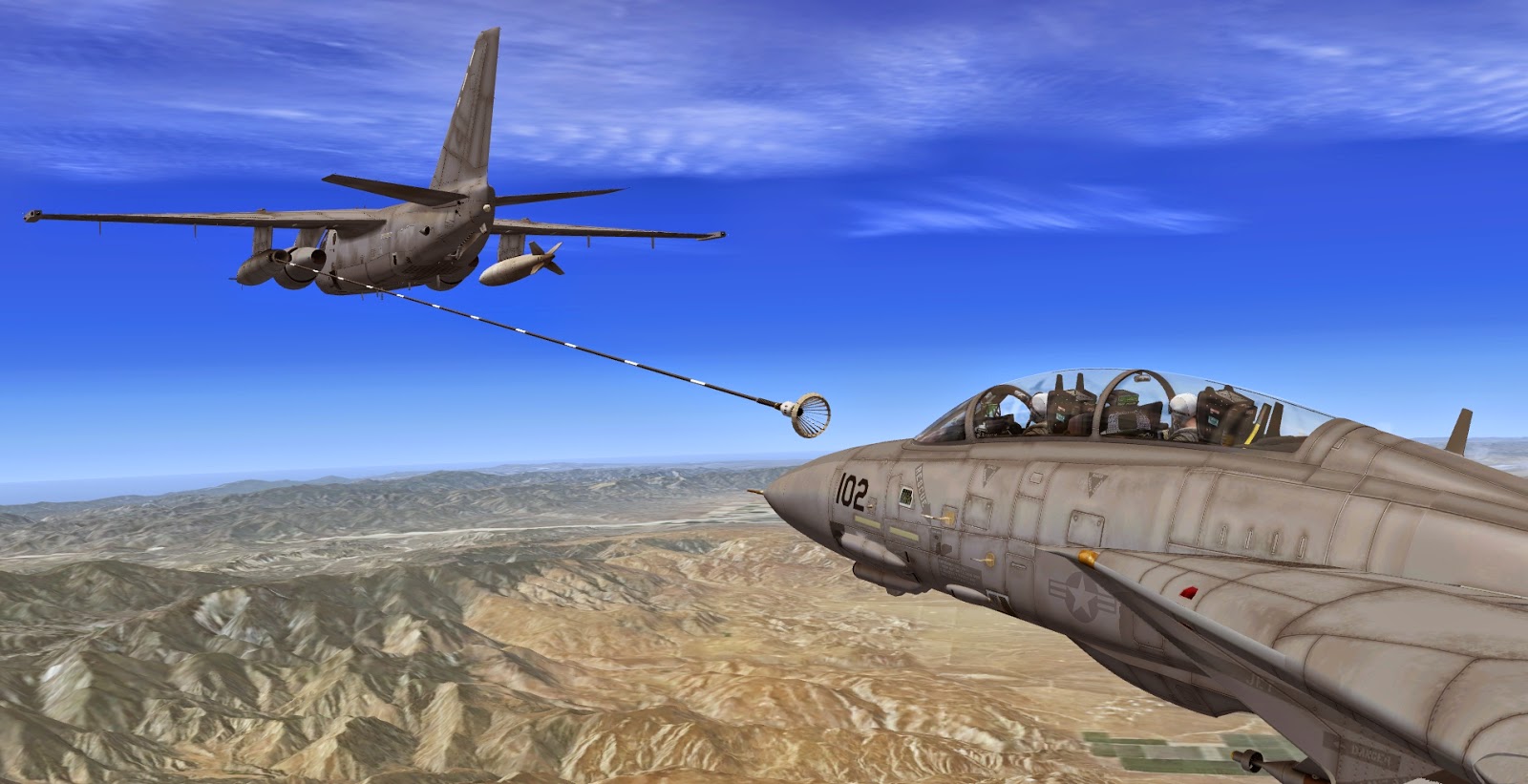 As some of you may be aware of, a small bug was detected in the recent updates of the F-14 and F-35. Namely, while performing an in-flight refuel in Tacpack, the fuel flow rate could become, in some instances, way too low.
I have updated the files to version get rid of this bug (well...now is a a little too fast!) but should be better than before. You can download, as usual, the latest and greatest from the side bar.

NOTE: there is no effect to non-Tacpack users, so they can live happily with the previous versions if they want to.

If there are no other major reasons to update the projects, these will be, most probably, the last versions compatible with Flight Simulator X - the next round of mods, if any, may include Prepar3D2-only features and I will not be able to support backward compatibility.

Posted by ScimmiaSpaziale at 5:31 PM 7 comments: 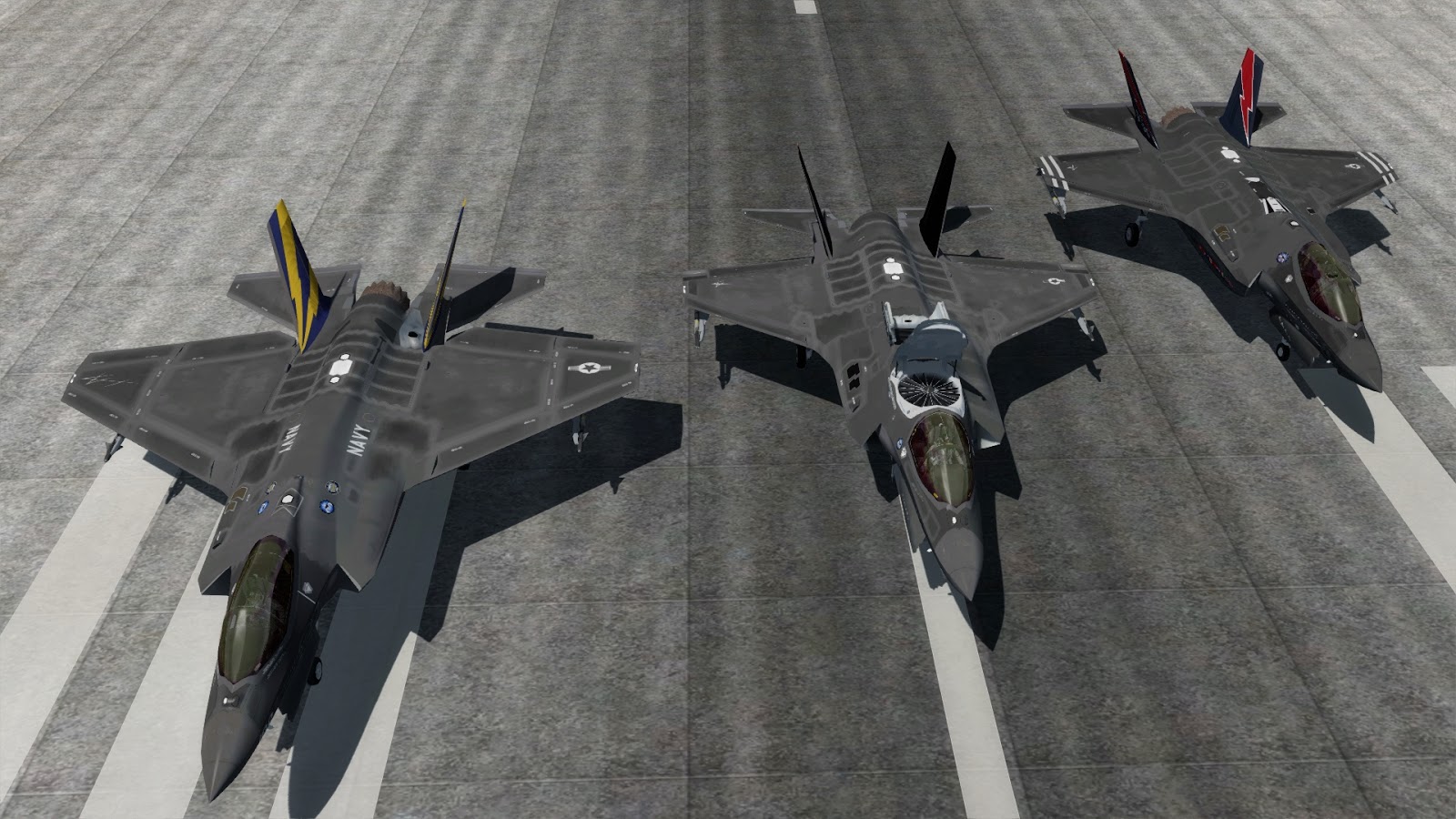 In a futile attempt to clean my virtual factory to make room for the roll-out of the S-3B Viking, here is an update to the F-35 project. No big changes, but several minor fixes I had collected over time. Change log for the update, which can be downloaded frome the side bar as usual, is as follows:

...and yes, there is an update for the T-45C in the works, which will mostly add some missing details in the cockpit and will increase the texture resolution...but this is not complete yet, and may take another week or two to be done.

As for the S-3, my current ETA is to have a Alpha build by mid may...and possibly a Beta in June, and a release once the Beta is debugged. I can tell you it is coming along quite nicely.
I have not yet decided if the Alpha and Beta builds will be public - please do not write asking to partecipate. I will post relevant instructions either on this blog or on facebook.

Also, provided there are no catastrophic issues, this may well be the last FSX-compatible update for the F-35 Project... Prepar3D v2.2 offers native sensor support (we could have ASR, TFLIR and DAS native support)...and it may be a better choice for the future of the project. But in any case, the focus is now on the S-3B Viking.

Posted by ScimmiaSpaziale at 1:10 AM 12 comments:

Yet another Tomcat update (version 2.28)... and a brief review of various projects.

Here is another update to my F-14D Tomcat - this will probably the last update for a while, and maybe the last FSX-compatible build. In the not-so near future, my plan is to start introducing P3DV2.2-only functions, such as working rear mirrors, and native sensor emulation and A/S radar. But don't freak out - this will not happen until 2015, and the S-3 and the MB.325 will be still compiled for FSX.

As you can see there are only minor changes... but still they have been sitting on my hard disk for a while, so here you go. You can download the files from the side bar, as usual.

NOTE: VERSION 2.27 HAD A SMALL BUG IN THE FUEL SYSTEM... IT HAS BEEN SUPERSEDED BY VERSION 2.28. Sorry for the inconvenience!
And now, a very quick review of where I am with the various projects...

T-45C Goshawk
There are a number of small improvements I am working on... most prominently, I am upgrading the visuals of the Virtual Cockpit, which now features better textures and more details. Also, I'd like to improve the near-stall behavior and add support Tacpack-based rockets.

F-35 Lightning II
Also for this one, there are a number of small improvements, like fixes for a couple of rendering issues I have spotted, and improvements to several areas of the code (working fuel tanks, more realistic refuel rate, IFF "Friend" cue, improvements to laser designation, support for HMD head roll. etc.etc.) - again, very minor things, but still...

S-3B VikingI know this is the one you are waiting for... and I am happy to announce that an Alpha build may be available at mid-May (hopefully!)... A lot of work to be done, but I have recently completed the VC modeling and texturing so, it is getting closer and closer.

MB.326Working on this from time to time...and it is making some progress. Looks good so far!

Posted by ScimmiaSpaziale at 11:32 AM 5 comments: 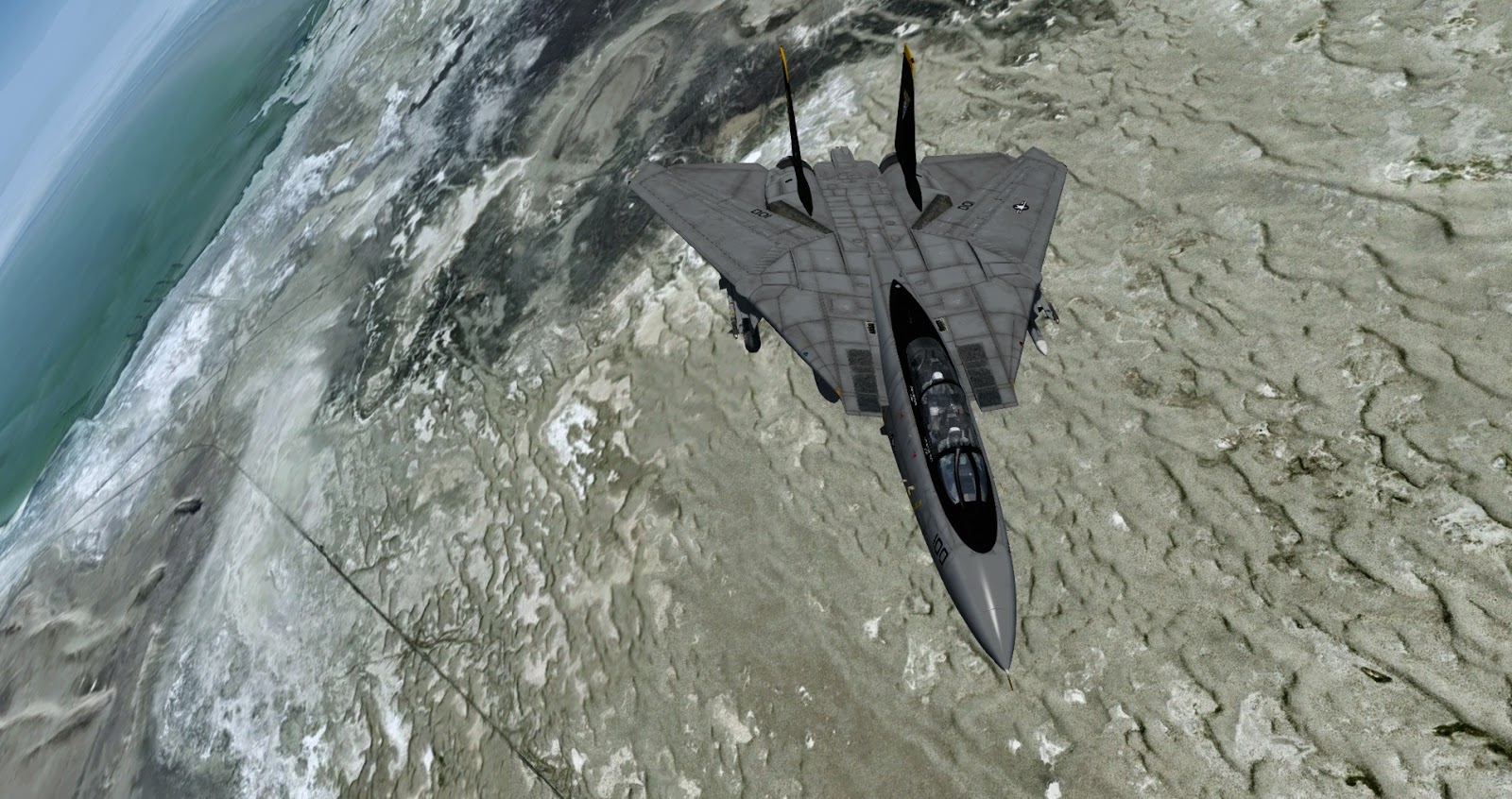 All, given I will not have much time in the next few weeks, here is an update to the F-14D project. There are still many bugs and inaccuracies, but, well, in the end it is still better than the previous version IMHO. The file can be downloaded from the link on the side bar of this blog.
VERSION 2.25
March 30th, 2014

COMPATIBILITY NOTE:There are minor incompatibility issues in P3Dv2.1, unless the HOTFIX 1 patch IS applied. Please check Prepar3d website for download and installation of Hotfix 1.

- Added support from AIM-54 Phoenix on STA 1B and STA 8B (Token weight is 1024lbs)
- Fuel tanks are now removeable. Presence is controlled by the weight on Station_load.11 (for STA 2) and .12 (for STA 7). Token weight is 381 lbs.
- Fuel tanks can be jettisoned in Tacpack via the EMERGENCY Jettison button.
- Fuel tanks are functional, through the Doug Dawson's fuel dump gauge. Uninistalling/dropping the tanks will immediately eliminate the fuel in the "External Tank" slot. Upon reinstalling the tanks, they must be refilled manually.
- TACPACK Weapons configurator rewritten from scratch, new graphics and more configurations available
- Minor improvement in the rendering of afterburners
- Minor improvements to autopilot logic (it still has many problems unfortunately)
- Revised transonic drag and engine performance at high altitude/high Mach no. (transonic wave is still low, but overall engine performance should be closer to the real deal)
- Fixed aicraft description in manus
- Fixed cockpit lighting issues
- Fixed few bugs in the MFD keypress logic (still apparently FSX cannot detect some mouse areas, which seem to work in P3Dv2)
- Improved NACES textures
- Added digits to Airspeed indicator for both Indicated Air Speed an Mach No.
- Added digits to Altimeter for both Altitude reading and Barometric setting
- Added AUTO and MAN mode for Air to Ground Ordnance release
- Added support for Pre-Planned (PP) targets. Note that the next Navigation Waypoint is designated as PP target, but in many instances the NAV computer updates the WP too fast. The function can still be used to upload the next WP to the current target, by switching back to TOO mode.
- Added DUD cue for bombs release in TACPACK (flashing cross in CCIP mode - flashing DUD cue in other modes)
- Rewritten Tacpack code in order to get rid of weapon accuracy bug in the previous release. Note: bug was not clearly identified and may still be there, weapons accuracy has not been tested.
- Rewritten Tacpack Air Refuel code, now should support a realistic fuel transfer rate (UNTESTED FEATURE)
- Fixed bugs in AoA Indexer (not transitioning correctly between lights)
- Added IFF Mode 4 TACPACK "Friend" CUE to A/A (will flash "FRIEND" cue in the HUD only, in A/A mode, if L&S target is positively identified as FRIEND - UNTESTED FEATURE)
VERSION 2.20
- Fixed accuracy of several analog gauges 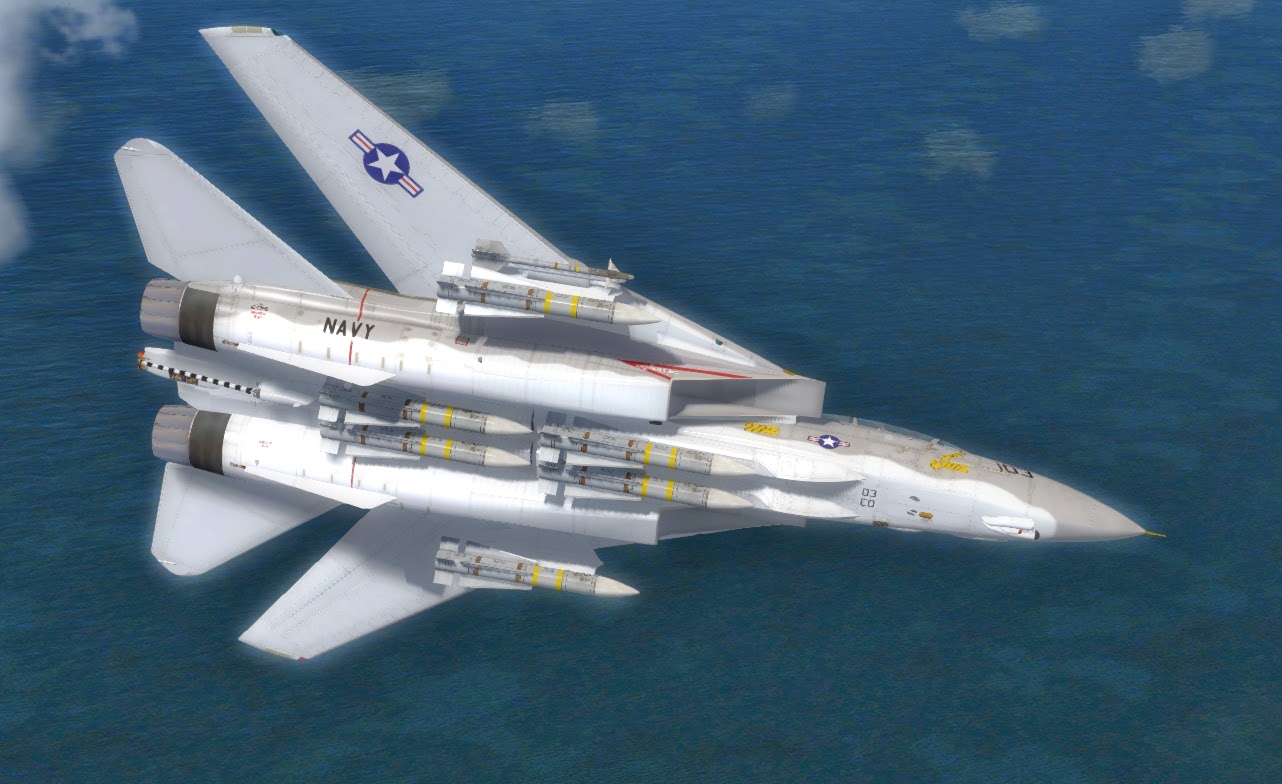 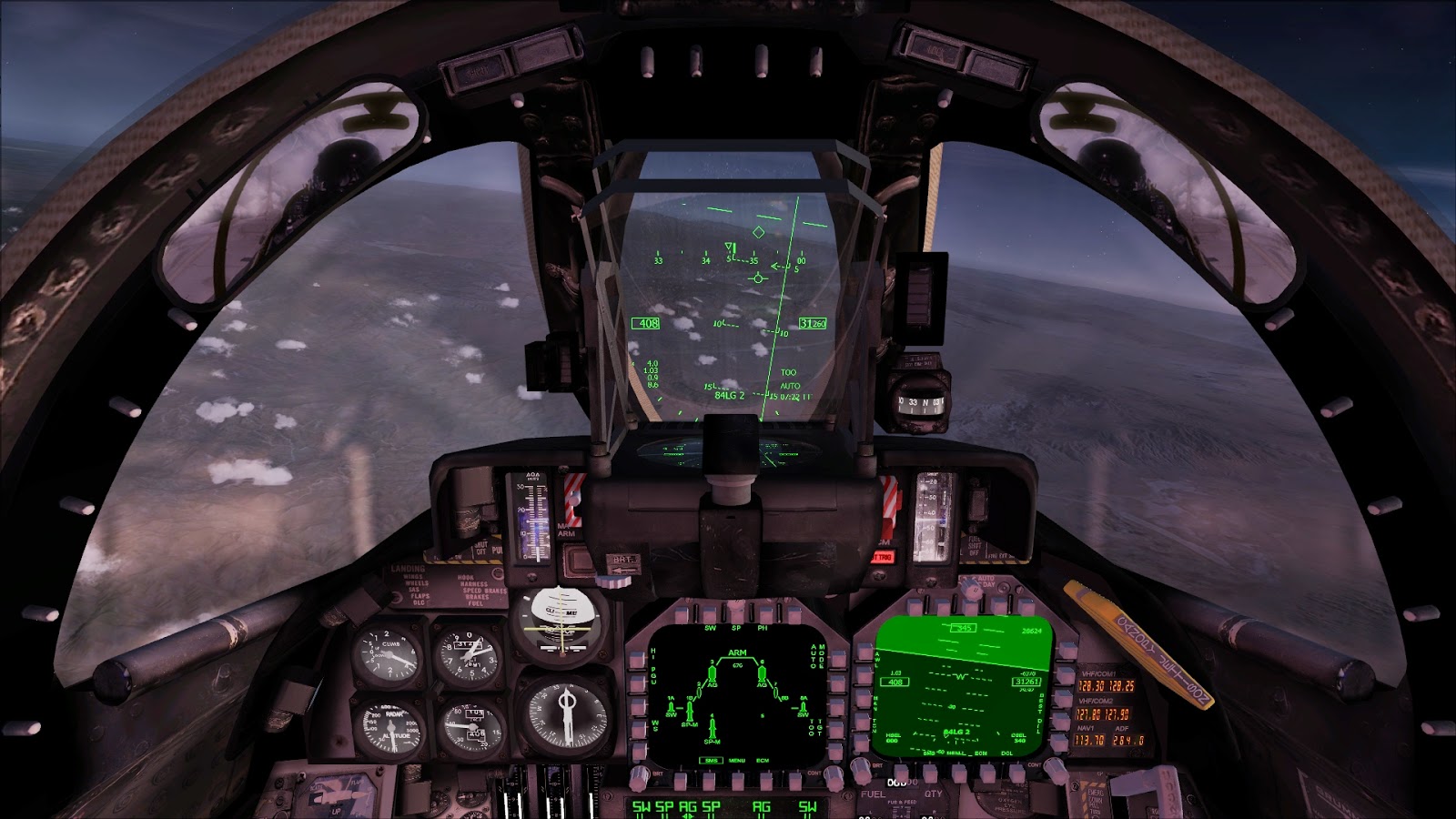 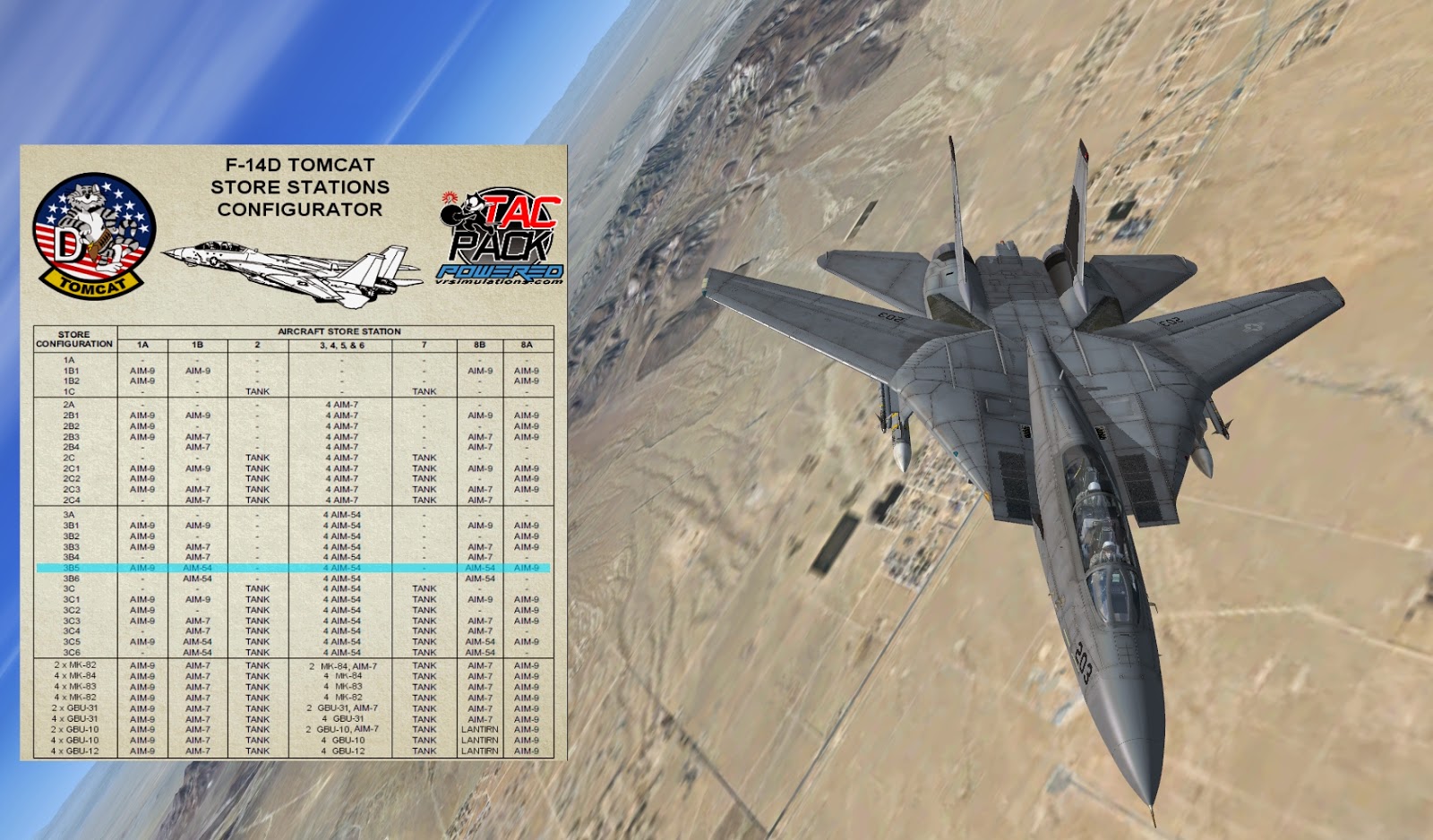 Posted by ScimmiaSpaziale at 3:30 AM 16 comments: