Apart from being a FSX simmer and designer, I am also a (relatively avid) gamer. My gaming-addiction severity largely depends on weather and mood, but I think I've played many of the most significant games of the current-generation on PC and Xbox 360.
Now, with the growing rumor of a Microsoft Flight Simulator Live-based game, I just wanted to share my thoughts about the modern air combat games currently available on the Microsoft console. As far as I know, there are only three such games: Over-G Fighters from Namco; Ace Combat 6 from Taito and Tom Clancy H.A.W.X. from Ubisoft. Other WWII air combat games exist, like Blazing Angels 1 and 2 - but I've never played them (and, for some reason, I've never actually liked WWII warbirds).
Let's start saying that none of them can be considered a simulation, even in a loose sense of the word. They are arcade games, and should not be treated as Falcon 4 competitors.
OVER-G FIGHTERS
Over-G Fighters has been the first jet combat game available on the XBox360. It could have been a good game, but it isn't mainly because of the poor graphics and presentation. In terms of game mechanics it is the only one that could be considered vaguely a flight simulation, as it is somewhat similar to F/A-18 Interceptor or JetFighter series. Still, the graphics are really bland and the manga-like briefings are extremely cheesy, apart from being completely out-of-context. Even if dogfights are vaguely realistic, multiplayer tends to be boring as you have to fly a lot over the mediocre scenery before facing an opponent. 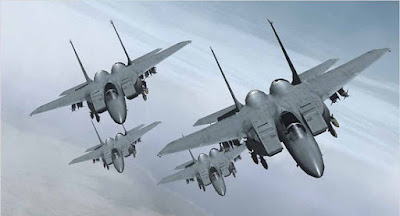 Over G Fighter graphics are generally poor - while the aircraft models show some love, the overall look is the one of an average PS2 game upscaled to HD. 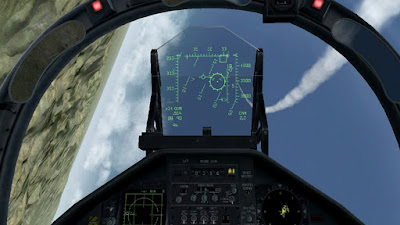 In terms of cockpit fidelity, Over G is the best of the bunch. Also, this is the only game on the Xbox360 in which dogfight mechanics could be called realistic.

Ace Combat games never tried to be realistic. Fictional countries. Spacecraft-like boss-vehicles. Unlockable sci-fi aiplanes. Unlimited weapons. This is a shoot'em-up dressed like a flight simulation. But it is a good shoot'em-up. Graphics are beautiful, partially due to extremely good filters, frame rate is superb and some of the sceneries are jaw-dropping. The game is fast and fun, provided you can stand the fictional environment and the extreme cheesiness of the useless cutscenes. Multiplayer is chaotic but relatively fun.
For my tastes, this game could have been a lot better with a non-fictional environment and a mission editor. It is a good 3d shooter with some brilliant in-game graphics and a Gundam-like flavour. 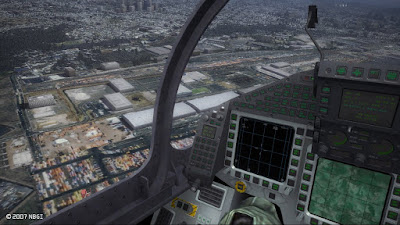 Ace Combat has intenal views...but they are not functional and serve no purpose in this game. 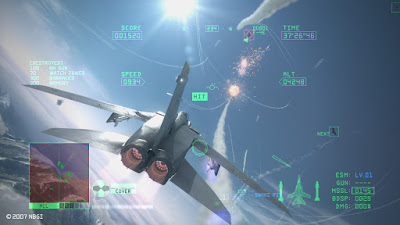 Ace Combat 6 visuals are good, and the graphics engine is extemely fast even if the sky is crowded by missiles, planes and explosions...and huge sci-fi boss vehicles.

Tom Clancy games on the X360 have been generally good and realistic, like Ghost Recon or Rainbox Six. This is not. This is an Ace Combat clone with real-life photoreal scenery and a fictional (and not really believable) story set in a near future. The only addition to Ace Combat mechanics is the possibility to switch to a "close combat" mode which is disorienting and adds no value to the gameplay. Graphically the game is good, but Ace Combat is better.

What was really disappointing for me was the fact that the Tom Clancy brand was a trademark for quality and realism, so I had (limited) hopes that HAWX could have been a good compromise between realism and fun. It is not. It is just an AC6 clone with the Tom Clancy name attached. 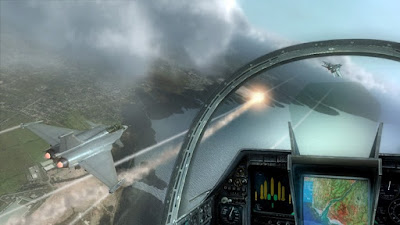 H.A.W.X. cockpit look flat...and they are not much functional to the game mechanics. 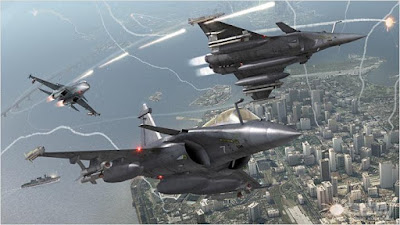 IN SUMMARY...
...for my tastes and at the moment I am writing,there is no air combat game worth buying on the Xbox 360. Ace Combat 6 is a competent shooter, spoiled by an extremely cheesy setting. HAWX is an AC6 clone that has nothing to do with the usual realism of the Tom Clancy brand. Over G could have been a good next-gen JetFighter but the execution is poor.
If you like (semi)realistic air combat games, there is nothing worth buying on the Xbox 360 at present. And I have some doubts there will be in future. Save your money for other things.
Posted by ScimmiaSpaziale at 12:16 PM

Very interesting blog. Many blogs I see these days do not really provide anything that attracts others, but believe me the way you interact is literally awesome.You can also check my articles as well.

Red Hat Certified Engineer is a professional who has expertise in handling the Red Hat Enterprise Linux System. The Certified Engineer takes care of various tasks such as setting kernel runtime parameters, handling various types of system logging and providing certain kinds of network operability. The professionals must have the ability to install networking services and security on servers running Red Hat Enterprise Linux.

noc engineer
For instance, ExterNetworks is successful because their engineers, technicians, and shift supervisors know what they are doing and what they are responsible for. They work together to ensure that the NOC is working properly for their clients. A network operations center NOC needs competent engineers and mindful shift managers to run properly

Nice. I am really impressed with your writing talents and also with the layout on your weblog. Appreciate, Is this a paid subject matter or did you customize it yourself? Either way keep up the nice quality writing, it is rare to peer a nice weblog like this one nowadays. Thank you, check also event management and gift ideas online