With Javier Fernandez's outstanding carriers on the loose, I am receiving many emails asking about the release of the F-14D Tomcat... At the moment I am writing, IT HAS NOT BEEN RELEASED YET. FSX portover of my FS2004 Tomcat was not done by me (and by the way has never been authorized) and has nothing to to with the new Tomcat, which is a completely new model - started from scratch.
I think I've just finished the external model: thanks to Paolo Oriani now there is a flap intelock that prevents flaps from being extended over Mach 0.3....this means a much more realistic behaviour of the wing sweep and flap mechanism. This was the major outstanding issue - so I think the external model is ready. Also, I am quite happy with the flight model, too. I've tried my best to have a realistic behaviour - and I've paid special attention to Guns210's feedback on the Beta version as he was a real life Tomcat driver.
Now, the cockpit issues need some work...but it is already functional and working. Some gauges don't show exact values and it is not yet possible to start from a "cold and dark" situation... But I am confident I can complete it before the next weekend. So...we're almost there.
Here are a couple of pictures from the latest build. 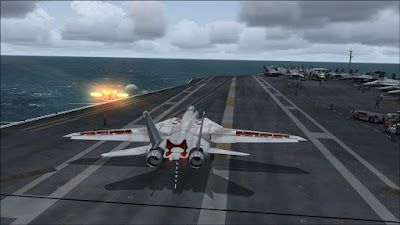 F-14D trap onto Javier's Nimitz carrier. Finally the approach is "power on" and approach speeds are almost correct! 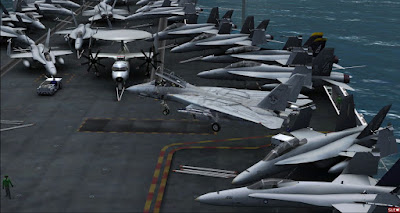 Surrounded by Superbugs... Hornets by mandate, Tomcats by choice! 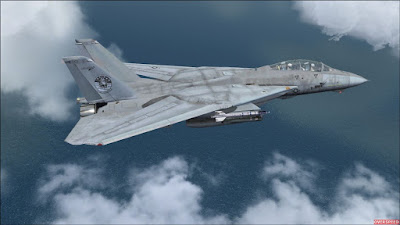 Thanks to Paolo Oriani, now the wing sweep behaviour is much closer to the real one.

Posted by ScimmiaSpaziale at 1:30 AM

Thanks for the good news.

Wonderful! This will work extremely well with the carrier freeware!

This author's work is the only thing I've seen that's up to the standard set by the original a/c models done by Microsoft Aces crew. The most noble thing is that he does it for free. This is a real blessing for all us flight sim fans. Thanks and keep up the good work, PLEASE~