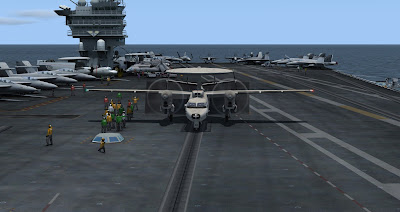 This post is meant as repository for infomation and bug reports on the Beta 2 build. The purpose of Beta 2 is to check that the bug fixes and the new features applied to Beta 1 have not caused any unintended side effects and the installer works correctly.
Please note that not all of the bugs in the Beta 1 have been addressed or solved - but any bug left should be a minor glitch that may be addressed by a patch at later stage.

Basically I'd like Beta testers to check that there are no catastrophic issues with the product or the installer.

IMPORTANT POINTS:
- The plane now embraces a cold and dark approach. Spawning the A/C on the ground will turn it off (meaning the engines will be switched off, the systems will be switched off and the parking brake will be set). Control+Shift+R sets the Aircraft in a "ready to start the engines" state. Control+Shift+O shuts the aircraft down.
- The plane now "enforces" the use of the MAX RUDDER switch as in the real deal. You will get a MASTER CAUTION alert if it is not ON (2°-6°) above 150 kts and OFF (20°) below 130 kts
- The flight model has been COMPLETELY reworked according to suggestions coming from real-world pilots. It should be more challenging to fly.

- The MAX RUDDER indication on the copilot side reworked to show actual rudder limiter status
- AOA indicator has now a white mark in the optimal area
- Added SHIFT+R key shortcut to toggle the MAX RUDDER switch.
- Caution and Warning lights conditions have been slightly reworked.
Posted by ScimmiaSpaziale at 8:36 PM

Hi Dino, this new E-2b2 build is brilliant. Got her started, flew, navigated, and landed without a hitch. Only observation is that the cockpit is DARK even with cockpit flood lights turned on at night. Are the panels not backlit in real life? If not, then would love to find a way to brighten up the cockpit. My only other comment, is esoteric. Once parked and cold, would be nice if the pilots disappeared from the cockpit. (perhaps user selectable?)

Otherwise, fantastic on the E-2. Will test the C-2 tomorrow evening.

Oh.. forgot to include... I was flying the steam gauge version of the E-2, not the digital one. :)

(E-2 P3D) Installed properly, no issues. Tested carrier ops/autopilot, etc... normal operation. Launch ok. Rudder (warning lamp and switching) as expected. I saw no major issues.
I noticed setting tacan on the upper panel does not link to the MFD... Entering via the MFD works fine for nav. I found the cat attach point very tight.. one has to be very precise on the lineup. Great job.

I have two items I'd like to have fixed before release, and are relevant to conduct accurate carrier ops:
1. AOA indexer blanks repeatedly when changing speed on approach.
2. Fuel dump switch (incorrectly labeled as Fuel pump) dumps the port then starboard fuel tanks in about 6 seconds each, causing rapid dual engine flameout. Fuel dump should only operate airborne, with both fuel tanks depleting at @1,300 lbs/min total (650 lbs/min per tank), down to auto shutoff at the tank standpipes of @1,215 lbs/side remaining. External view should show the fuel stream as long white smoke trail from the mast if possible.

1. Max rudder/master caution light incorrectly illuminates with full pedal throw with 6-2 degree rudder selected and 2 degree stops engaged.
2. Yoke elevator movement should not move the pitch trim indicator.
3. Start switch should be spring loaded to center detent.
4. Main and Stby Prop pump lights should be illuminated below 60% on engine start from cold and dark.
5. Bleed air lights should illuminate during start cycle and extinguish after start.
6. Fuel Dump switch incorrectly labeled as “Fuel Pump.”
7. Fuel Quantity gauges should be in lbs, increments of 100 pounds from 0 to 6500, not percentage.
8. Engine smoke should be enabled as very light but perceptible.
9. Fluid Cutoff Handle should shut down its respective engine and electrically feather the prop.

Thanks again for a great job on this project.

For the record, there seems to be a major glitch with Beta 2 build with FSX - so that the engines are shut off upon loading the aircraft and there is no way to start them.

This is obviously a show stopper.
Beta 2 seems to work fine with P3Dv4.

Can confirm too. FSX:SE ;)
-Tried to start engines for an hour yesterday evening. -At least I know the manual quite well now. :D :D ;) -I followed quick start procedure (6.2 on p.61) precisely, and read the FAQs as well. -No joy. :(
Finally I slewed to 20000ft an did a gliding approach. :) -Feathering works. -Controls feel good so far; but hard to say without power of course.

Dino, is there any workaround to get the engines running in FSX?

Dino, it seems to be okay.

Did a few FCLPs tonight! -Harder to fly, but - Wow! :-) - feels a lot more realistic than in Beta 1! In the groove you now need to use the same strong and precise control-inputs to force the plane in the desired direction I saw real C-2-pilots do in videos. -And you need to virtually foresee what has to be done the next few seconds during the approach. -Exactly like they described flying the C-2 in a documentary I've seen recently.
Awesome work, Dino!

Found some little bugs too:

C-2 Turn-Indicator: Ball and needle move the rigt way now, but there are two black balls in slip-indicator now. One moves as it should, the other one always stays centered. (Maybe a background texture with ball...?)

C-2-aircraft.cfg-file: [aircraft tuning]-section is doubled. -I know it doesn't matter. -Just for the record. :) ;)

Manual states to manually edit the aircraft.cfg regarding fuel flow gain, however, the manual indicates only one line to edit, but the cfg has four fuel flow gain lines. Is it now unnecessary to fix, or comment out all four lines, or what? Thanks Dino for a great aircraft!!!

Found a couple of issues today.
1. Seems that trying to use the GPS crashes P3D. Specifically, pressed the "direct" button and crash. Works fine with all other aircraft.
2. Can't seem to get the Tacan to tune Y channels.

One more issue so far:
1. max_number_of_stations in the C-2 aircraft.cfg needed changed from 2 to 9 in order to adjust paxs in fuel/payload window.

Hi, i have purchased the E-2C and C-2, beautiful, but i can't arm the catapult, which is the way to lower the launch bar, i can't find out how to catapult them, thank you in advance, jpm

This aircraft has levers that control mixure "Rich, Lean, Feather" how do I assign to an axis or will this require lua?

Why are the panel switches not moving in response to keyboard commands?