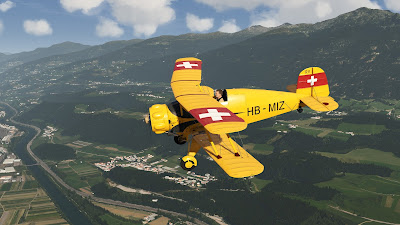 If you follow my Facebook page, you know that, from time to time, I have been making some experiments with IPACS Aerofly FS2 flight simulator.
This simulator has left the "Early Access" area on Steam and it is now available as a "finished" product. Since many of you are asking if it is any good, I thought it was a good idea to share my opinions - much like I did when it was originally released in Early Access.
Aerofly FS2 is the latest product from IPACS, a Swiss company that produced the popular Aerofly RC series (a series of radio-controlled aircraft model simulators) and Aerofly FS (their take on a full scale flight simulator). The original Aerofly FS was praised for its good performance, nice photoreal scenery and good visuals - although it failed to catch the attention of the vast majority of the simmers community.

The second iteration is in a much better position as its early version was released with native support of the HTC Vive and the Oculus Rift right when these two headsets were gaining popularity - and due to its super-smooth frame rate, it quickly become popular within the niche of simmer who own a Virtual Reality headset. I bought it when I got my HTC Vive - and I was amazed on the smothness  and graphic quality of the experience.

Although it only comprises fixed wing machines, the aircraft selection of Aerofly FS is second to none. There is something for everyone: starting from the Cessna 172 up to the 747-400 and everything in the middle, including two gliders
(the ASG 29 and the Margansky Swift S1), twin-props (Beech Baron B58 and King Air C90), a business jet (Learjet 45 of course), unlimited acrobatic planes (Extra 300 and Pitts S.2B), warbirds (Corsair, P-38 and the Sopwith Camel) and military jets (F-15, F-18 and the MB-339 trainer). By downloading and installing the SDK you can also get the DR-400, while the Dash 8 Q400 is also available as free download (and it is probably the best Aircraft in terms of system modeling.
The visual quality is great and very consistent - by far the best default fleet of any simulator.
The flight models are less consistent - some are very good, some are just OK. Most of them will not be as accurate as the most demanding simmers would like, but in general they are acceptable and deliver a good "sensation" of flight.

Much like its predecessor, AFS2 takes the photoreal approach. The base scenery covers most of the West Coast of the United states and includes California, Nevada and Arizona - Colorado and Utah areas are available as free downloads, as well as a higher resolution version of the base scenery. The New York area and Switzerland are available at pay-for DLC (currently 14.99€ each). Orbx has released Innsbruck and Meigs Field, and will release Monterey shortly.

Sticking to the default content, if you are into photoscenery in terms of image quality it does not get much better than this, provided you download the high-res version (pretty big download...90 Gigabytes!!!). Flying over the Sierras or the Death Valley is AWESOME - the image quality is really good and the overall impression of realism is fantastic.

On the bad side, autogen coverage is sparse and inconsistent - some areas are well done and include buildings, some others have just trees - and some other have nothing. Also, there is no shader or mask for water - just the texture... which is disappointing.
Another bad thing is that not all the airports in the base region are included - for example Point Mugu NAS is not there. On the flipside, the default airports are nice and detailed (although generic) - much better than other sims.

The Aircraft simulation engine takes a very interesting and powerful approach: the core of the engine is basically a rigid body simulator, which includes linkages, servos and dampers - and a number of aerodynamic and system features. It is much more complex and flexible than what most people think.
Its major drawbacks, at the moment, are the fact that it only supports fixed wing aicraft and that it does not support custom code for advanced avionics.

The environment simulation is one of the weakest points. No ATC, no traffic, weather simulation is basically limited to wind intensity and direction - there is a lot of work to do in this area. Also, at least for the moment, NO MULTIPLAYER.

The graphic engine is GREAT for three reasons:
- The performance is really good - you can easily exceed 120 frames per second on a decent machine, and it is definitely good enough for simming in Virtual Reality and 4K displays. Granted, this is also because there is no traffic, nor ATC
- The draw distance and image quality is INCREDIBLE.
- The shaders are quite good. The reflections work well, the glass shader is awesome and the day lighting is very good (I'd say it is the best around as it delivers a good, natural contrast).

Unfortunately the lack of water shaders and masks is a big drawback - and then the clouds are very basic and do not cast shadows. Bummer.

Third part support is quite limited at the moment - basically there are just three Orbx airports (Meigs Field, Innsbruck and the soon-to-be released Monterey). They are awesome...and they really shine thanks to the smooth frame rates and draw distance. Innsbruck in particular is awesome. A short flight around this airport in VR in a Cessna 172 is incredibly immersive.

The SDK is quite powerful (it is the same tool used by the authors)...but also poorly documented. Developing or converting an aicraft is not very difficult...but requires A LOT of manual text editing. A LOT. On the other hand, once you get used to it, the process of converting an aircraft from FSX is straightforward and not very long (probably around 20 hours tops).

GOOD:
- Fantastic frame rates and overall performance
- Great selection of aicrafts with excellent visual models
- The high-res version of the base scenery is awesome
- Fantastic sense of immersion in Virtual Reality

BAD:
- no traffic and no ATC
- no multiplayer

In summary, at the moment AFS2 is quite a barebone simulator. There is just your aicraft (with excellent visuals and decent simulation) and there is a huge beautiful photoscenery (which looks AWESOME except for the water)...but this is delivered with an incredibly smooth frame rate and a fantastic draw distance. If that is enough for you, it is highly recommended. It is also highly recommended if you own a VR Helmet.
If you are looking for extremely detailed procedures, ATC or multiplayer, AFS2 is not your simulator (...yet). 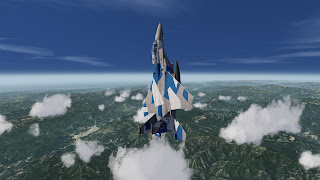 The F-15E modeled by MilViz is part of the default aicrafts...and looks awesome. The cockpit looks great, but its functionality is limited. 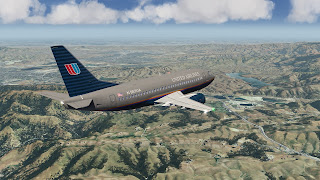 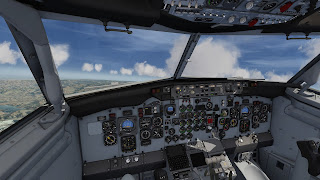 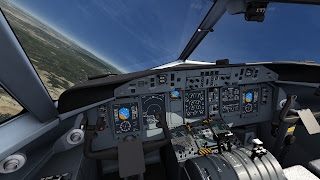 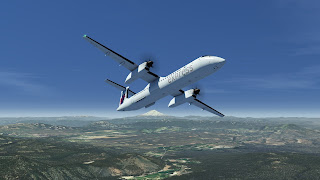 The Dash 8 Q400 is available as free DLC...and it is probably the best aicraft of AFS2 in terms of simulation...it may not be on part with the best of the best we've seen in other sims, but it is not bad. 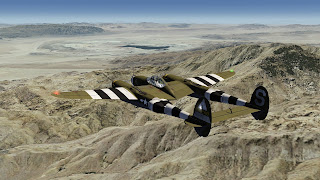 The draw distance and frame rates are amazing 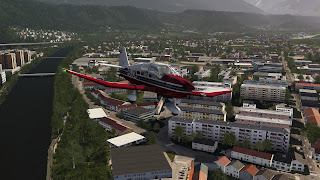 Orbx Innsbruck is AWESOME - extremely detailed (same as the FSX/P3D version) but with the added bonus of the frame rate and image sharpness of AFS2. 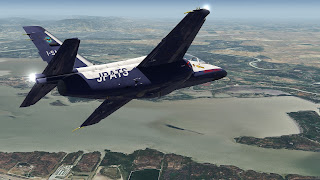 The first attempts to export my SIAI S-211 in AFS2.


Posted by ScimmiaSpaziale at 12:45 PM

Thanks for the very informative review of Aerofly FS2!

IPACS is a German company not Swiss. But like Swiss aiming for perfection.