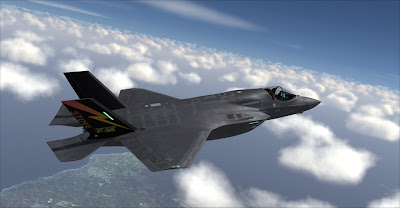 Lockheed Martin has released P3Dv5 Hotfitx 2 a few days ago - hopefully it solves some of the stability/CTD issues that some of you told me about.
Apart from the stability issues, you may have noticed that some night effects (external lights, landing lights and VC illumination) are too bright and lights behave as "X-Rays". The excessive intesity is due to new parameters introduced in P3Dv5 (which only affect PBR materials), while the "x-ray" effect is unfortunately due to the graphic engine of the sim.
I'll try to find the time to update the effects on my older planes.
In terms of compatibility of my planes, nothing has changed...so here is the situation.

F-35 LIGHTNING II - As previously noted, you need version 3.67 or above for it work fine with P3Dv5. Apart from that, and the excessive brightness of some effects at night, there are some minor issues with the voice alerts.

EUROFIGHTER TYPHOON - Works fine, except the excessive night lighting...which is particularly annoying since the landing lights illuminate the cockpit.

C-2 GREYHOUND / E-2 HAWKEYE - They should work fine, as they do not have PBR effects.

S-211/M-345 PROTOTYPE - They should work fine as there are no PBR effects in the cockpit.

Posted by ScimmiaSpaziale at 3:38 PM

I have just bought the payware F-35 from SimMarket and installed into P3D v4.5 Documents Addons folder. All seems to be fine apart from the Weapons Configurator is saying i don't have Tac Pack installed? I just updated mt TacPack install today with a new download. I have my purchase email as proof. Do you know why it is not detecting TP?

Also is there any kinf of manual available anywhere? I seem to remember there was one for earlier versions?

Unfortunately Tacpack is not compatible with V4.5. Also stated on VRS SIMULATIONS website

I've been trying to use ILS in the payware F-35 from SimMarket to no avail so far. Is there a simple guide to be able to use it?

Any info is sincerely appreciated.

A simulation is an approximate imitation of the operation of a process or system that represents its operation over time.
C4ISR Integration