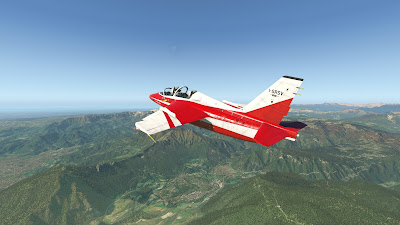 As per my usual procedure, here is a post to collect the feedback from the selected Beta testers for the upcoming SIAI-Marchetti S-211 project for X-Plane 11.30.

Red - Major problem which severely affects the functionality or the enjoyability of the aircraft. Ideally, all "red" issues must be solved before release.

Yellow - Important issue that affects the functionality or the enjoyability of the aircraft, but only to a certain point...basically you can still fly and have fun with the aircraft, but it would be better if the issue was cleared.
Green - Minor issue or observation which would be nice to see solved or added to the plane, or a red/yellow problem which has been solved.

Blue - Suggestions, which may or may not be implemented.

Testers can use, at their will, this spreadsheet (in Excel format) to collect their findings.

S211XPFM01 - Excessive tendency to variate pitch depending on flap position, requiring too much trim action to the pilot. Fixed 14/07

S211XPOT01 - Sound package perceived as low quality (engine noise). Note that the current package is done with real world aircraft recording...but it has been downsampled to 22KHz for use with legacy X-Plane sound system. X-Plane 11 can also implement sounds through FMOD, although indie licence is limited to 1 project per year…
Posted by ScimmiaSpaziale at 11:40 PM

Overlapping UVs on rear HStab causing "marching ants". Actually I think it's in the geo between the control surface and the HStab.

Rivets on wings and control surfaces are NML inverted and pushing in insead of raised (seem a bit large too?)

Left rear fusealge there is UV sheering. Will have to email screenshots to support. There is also sheeting on the leading edge of the wings near the root. Not present on right rear.

More overlapping UVs in the wing UVMap where the aileron meets the wing body as well as on top of the "vortex generator?" on the top side of the wing

Sheering on the nose centerline textures are stretched and do no match where they meet.

Overlapping UVs bleeding through from the cockpit maybe are seen on the fusealge near the side intake area and just above.

Landing / Taxi light switch only does TO and Off I believe

Engine Sounds need improving - but it is beta

Cockpit
MANIP for "Altimeter Setting" is missplaced and inop (there are two, one just above and slightly right of the CRS knob).
For all rotaries please consider using a manip that supports scroll wheel operation.
"Test fire warning" does not animate

The drag interval for changing radio freq is too fast making it almost impossible to tune. Same for XPDR, Baro and ADF.


(OPINION)Try to be consistent with MANIP handles. If the action is a click then use a hand or pointer, if drag_axis then up-down/left-right. If I might be so bold I might go through the cockpit OBJ and redo most of the manips for VR support also (haven't tested in VR yet)

Cockpit
Oil and Hydraulic pressure are INOP as is cabin pressure

Thank you for your comments.

- If visual or texture issue is spotted, a screenshot is most welcome. I hope to solve all the possible issues, but the model renders a little differently from how it shows in FSX, P3D and AFS2. If a texturing issue is spotted please specify the exact livery.

- I understand manipulators is perceived as a big issue. Please specify your preferred manipulator.

- I would suggest NOT to change the files on your own initiative, and the OBJ files in particular: all the OBJ are subject to change.

Yup it would be more a case of modify the OBJ to confirm operation so that you can change the RAW file :D

Screenshots supplied in return email (sent about 10mins ago). Livery was NX521S.

My findings so far:

- engine sound has no gradual increments, you can hear it divided in "notches", divided in samples;
- taxi/landing light switch can be moved only over "off" and "land" positions, so no taxi lights;
- seconds needle on the watch is slower than actual seconds;
- trailing edge flaps actuators "sink" inside the flaps volume;
- external actuator of left trailing edge flap is inoperative.

Sorry for the lack of updates... I've been busy at work.

I have been working on tweaking the manipulators and I have found several solutions to the problem... will keep you posted.

Thanks for the comments. I will verify them. As for the sound, however, the problem is generated by the fact that I am using the default XP11 sound engine. It is possible to solve it by using FMOD, but given that there is an associated license fee I am not sure I want to go in that direction...

dont know if you looked over on XPLANE org, there is a whole forum on plane modelling in xplane, might find a solution to some of your problems.

Hi Dino,Begun some flight testing, only just started but can you have a look at nose pitch when raising lowering flaps seems a bit aggressive.
THanks

I tend to agree with your comment. However, this is a side effect of trying to have the flaps to compensate for the stall speed in approach configuration predicted by XP11 which is a little high… I'll see what I can do to mitigate the problem.

Hi Dino, just had another quick flight. The rudder from the rear view is always deflected to right. never delects to left past centre with pedals, though rudder pedals work correctly. Also tying to figure out how much affect the speed brake should have. Some nice videos on youtube but nothing really shows instruments that i have found yet.

Flight Model
Dont have performance data, but do have flight manual. Did quick climb test at 80% climbed at around 4000FPM at fl200 it was around 2000FPM 170KTS. failed engine and did a 130KT best glide - this is the fun stuff, need to find better way to test. According to the specs and my calculations it should at 130kts descend at around 1100 fpm and it wasnt far off. I started at around FL24, probably 330 nm from airport need to do with map next time to confirm, I overflew the airport which is about right should have given me 43 nm. Flying can be fun.

Any chance of the updated ver

Sounds.
Now that I have flown it a bit, sounds are not to bad, it probably the stepping in pitch that is the issue when starting and moving throttle, not bad when at one throttle setting.