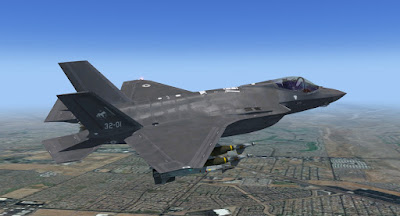 * UPDATE *
A FURTHER UPDATE TO VERSION 3.20 IS AVAILABLE

Following user feedback I have been working on small updates to the F-35 project. As some of you are aware of, the source files have been lost, so - while I am slowly rebuilding them - some of the cahnges requested cannot be implemented.
I will not have much time to work on the F-35 for a little while, so here is a small .zip file that contains some minor improvements to the F-35 avionics:

Installation: the .zip file contains two folders (F-35_MFD and Tactical) - copy and paste these folders included in the .zip file into the F-35A\panel folder and allow the existing files to be overwritten
The typical location is C:\Program Files (x86)\Lockheed Martin\Prepar3D v3\SimObjects\Airplanes\F-35A\Panel\

NOTES: THIS UPDATE APPLIES ONLY TO THE PAYWARE F-35 VERSION FOR P3D - Do not use it on other versions, or in FSX!

Changes are as follows:

Version 3.20
- Fixed a bug in all previous version that made it so that Air-to-air track no.3 was rendered in a wrong position on the radar screen
- As reported by user Ariel, changed the power up order of the MFD screens. Now the RIGHT MFD will power up first (on Battery power only) and the LEFT MFD will power up second (on generator power).
- Changed ENG page so that FF, HYD1 and HYD2 are reported as digits rather than "bars" - this should be the same as real life (reported by user Ariel)
- Changed FUEL page so that fuel quantities in tanks are reported in pounds rather than in gallons - again this should be the way it works in real life (reported by user Ariel)

Version 3.16
- Fixed a bug in version 3.15 which prevented the air-to-air radar functions to work as intended in Tacpack
- Fixed minor bug in FCS code

- Solved minor graphic flaw when the Function Access Buttons are SWAPped
- Restored "virtual speed brakes" indication in FCS page
- Implemented FAB-fuel function - fuel quantity, is now reported as magenta bars in the FAB section, Joker and Bingo are reported as white lines.
- Fixed position of transfer pumps in the FUEL page
- IPP switch now also drives engine starter (in reality, the switch has three positions: OFF-AUTO-START and should be spring loaded to the AUTO, in the sim it is just OFF or START)
- Left half of the MFD works on battery power only, Right half does not (as in reality) - when the generator is not working, the right MFD will turn off
- Increased startup time for both halves of the MFD to 15 seconds (as in reality)
- TFLIR and DAS now require generator power to run
- A/S and Tacpack radars will not work unless engine is running

You can download the .zip file by clicking HERE

Posted by ScimmiaSpaziale at 1:48 AM

Appreciate it Dino.....I know the source file loss was a big deal for you but continue to press forward my friend, you have many fans!

Thanks Dino! Really incredible of you to continue to make improvements despite the hassles you have been through. It is appreciated. Best of luck for all your current and future projects.

Incredible work! I have P3D pro. Will the B and C model work with PRO?

The complete package works fine with P3D PRO - although, to get the best out of the F-35, you should have Tacpack installed...

Thank you. Does it work with PRO plus?

Dino, bought your F-35 yesterday, great work. How can we load flight plans, or does that capability not exist?

Dino, another question: In TacPack multiplayer mode, the F-35's transponder does not appear to transmit - other aircraft see it as "unknown", despite squawking a friendly code. Am I missing a setting? Related to this, the F-35 radar does not appear to be able to assign "friend" or "unkown" status to contacts based on IFF codes.

Hi Dino, hope this finds you well. I'm really enjoying the F-35. I use the one for FSX. I have a question for you. I have noticed that some of the key stoke commands only work in the virtual cockpit. Is there a way to make them work outside of that. I have built a cockpit and I don't need to see the virtual cockpit. I only want the outside views. If I depleted all my ammunition and missiles to reload I have to go back into the virtual cockpit hit the keystroke and then exit out is there another way around this so I don't have to keep flipping my screens. Thanks for your time love the F35!

Hi Dino, hope this finds you well. I'm really enjoying the F-35. I use the one for FSX. I have a question for you. I have noticed that some of the key stoke commands only work in the virtual cockpit. Is there a way to make them work outside of that. I have built a cockpit and I don't need to see the virtual cockpit. I only want the outside views. If I depleted all my ammunition and missiles to reload I have to go back into the virtual cockpit hit the keystroke and then exit out is there another way around this so I don't have to keep flipping my screens. Thanks for your time love the F35!

All, sorry for the late replies - I have been on a business trip for the last 10 days or so.

@Toby - at the moment, you can only use flight plans created with the default flight planner. These will show in the TSD screens.

@Toby - I will check that... this may be a bug. IFF should be always on and radiating.

@Andre Barton - This should indeed work in the payware version (both in FSX and P3D), I will check. The old FSX versions (2.XX) are not supported anymore.

Hi Dino,
I ordered F-35 Lightning II Package for P3D via FSPilotShop.
According the README file, this was for the 3.11 release.
I see on your blog your F-35 AVIONICS UPDATE for v3.16 and i tried to get it.
Unfortunately, the link in your blog doesn't work for me.:
"You can download the .zip file by clicking HERE"

Same problem with the link to get the manual.

The manual is located in the F-35A/docs folder

As for the link - it should bring you on the Google Drive page. An icon on the top will allow you to download the update (which must be manually installed).

Otherwise, all of my downloads are listed on the side bar of the blog (download section of course).

Great.
Thanks for the quick replly.

Dino, I want to modify my previous notation on the F-35's radar related to IFF. If I select the correct team using the TacPack menu within P3Dv3, the radar correctly ID's "Friend" contacts. So, our issue appears focused on the IFF / Transponder squawk function.

Another issue, though - the ASSIGN function on TSD does not appear to be functioning. Trying to use as described in the manual, unable to designate ground targets on the TSD using ASSIGN function.

Regardless, this is a great creation of yours. The FDE gives us crisp handling, much like the F-16 that it is supposed to replace. We're using it a lot in a virtual wing, multiplayer setting, and it is a great addition.

Hello,
I didn't find any manual or tuto for this aricraft.
Previoulsly for F/A-18, i found and i used the NATOPS FLIGHT MANUAL NAVY MODEL.
I googled but no chance with F-35. Classified ?
Do you have something or some link to any document ?
Thanks for help.

Thanks for the information.
As for the ASSIGN there is a typo in the manual (well...there are dozens of them) - you should use the ATK control.

The manual is indeed classified - this simulation is based on publicily available information and cockpit demos. You may look for such videos on Youtube.

Thank you, Dino. The ATK function works great. Is there a way to fine-tune the TFLIR target selection after that, slewing the TFLIR screen to get right on a structure?

FDE issue: we were not able to achieve design endurance, despite high altitude and conservative power setting. We were coming up well short, at about 800nm. Found a reference to the F135 having SFC of 0.70, which is below the Wikipedia 0.88 cited in your notes. Using that in the FDE, our range is now closer to 1200nm.

I understand from your documentation that you don't intend to revisit this model, so I thought I'd get this out there for any others who might want it. Realize also that this could potentially trigger anti-cheat features in TacPack hosted mulitplayer sessions, since it's a mod of the original FDE.

We are loving the payware F-35, and strongly recommend its purchase - both to enjoy and to support Dino's work in making FSX/P3D better for all of us over the years.

Thanks for your appreciation and for the information - I had no sound data for the F-135 SFC (could you please cite your source?) - Also, I am slowly rebuilding the source file for the virtual cockpit(s) in order to allow future modifications to the aircraft (you might recall that the source files are lost). Until that is complete, I am stuck with minimal changes which will be released through the blog.

Also, I will continue improving the F-35 - I plan to release a new installer in January/February.

"Slewing" the TFLIR is currently not supported - although it is in my to do list. This is a tricky function to implement but I will look into that.

Note that the best way to provide feedback is via email. I'd appreciate if you could summarize your findings in an email to indiafoxtecho@gmail.com.

I hope this finds you well. I have another question for you. I bought the f-35 compatability patch. when i put it in FSX it removes the f 35A and B model is that suppose to happen? My guess is I'm doing something wrong. How do I fix this issue? Or is that the way its suppose to be. Thanks for you time

Thank you for the nice article here. Really nice and keep update to explore more gaming tips and ideas.

The information which you have provided is very good. It is very useful who is looking for game testing services

playrep, here you can download funrep app free for android and windows


This concept is a good way to enhance the knowledge.thanks for sharing. please keep it up

Really amazing information, thanks for sharing this valuable information with us. Visit Ogen Infosystem for the best website designing services and PPC Services at an affordable price.
Web Designing Company