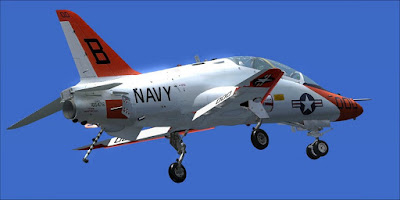 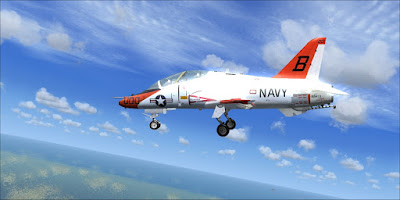 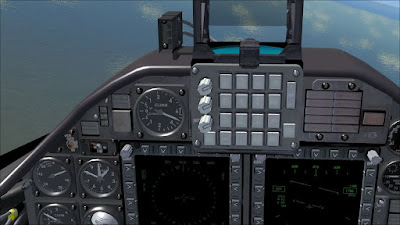 Cockpit preview - some more work needed
All the screenshots above are taken directly from FSX with DX10 preview, with no editing except border cropping. The external model is complete, but the cockpit needs some more work (basically the main panel is done, but the rest is far from being complete). By the way, the plane wll feature only the virtual cockpit. 2D cockpit will be limited to HUD (as the Acceleration F/A-18) . Also, virtual cockpit will only have partial functionality: only the main instruments will be working. On the good side, everything will be in 3D, including the gauges.
Posted by ScimmiaSpaziale at 1:24 PM No comments: 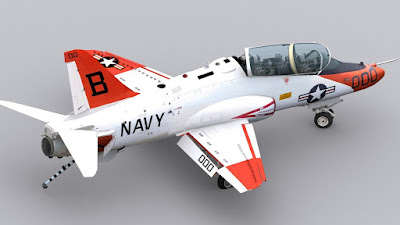 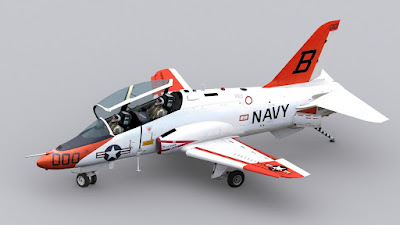 Above are two renderings of the main project I'm working on in these days. It is a Boeing T-45C Goshawk model for Flight Simulator X Acceleration. The T-45C is a carrier capable version of the British Aerospace Hawk and it is currently employed by the U.S.Navy as jet trainer for strike fighter pilot candidates.

The main features of this project will be:

- FSX-compliant external model, including bloom, self shadowing and bump maps

- Full virtual cockpit, with 3D gauges, MFD and HUD. Due to several constraints the cockpit will only be partially functional. HUD and MFD will be aliased from FSX:Acceleration F/A-18

Actual screenshots and a preview of the cockpit will follow soon. I may need beta-test pilots in the near future, so, if you're interested to help, keep visiting this blog.
For those who may be interested, the model has 80.000 polygons. The images above took 40 minutes to render on a Athlon 64X2 6400, 8800GT, 4Gb RAM machine.

Hello world. My name is Dino Cattaneo and this is India-India-Alpha-Foxt-Echo, a blog about my flight simulator projects and flight simulation in general.

Some Flight Simulator users may remember my name from my previous freeware works. I began developing small projects (repaints and panels) for Flight Simulator 98 several years ago and then moved to full scale aircraft modeling for FS2000, FS2002 and FS2004 and now Flight Simulator X.
My most successful project to date is a freeware F-14 Tomcat for FS2004 which won the FlightSim Developer Award and, in its various versions, has been downloaded more than one hundred thousand times.

I am a 34 years old mechanical engineer working in Genoa, Italy, for a company that manufactures electrical components (some of which are also employed on actual civilian and military airplanes). I've always been an enthusiast of aviation, videogames, engineering, computer science and technology in general so it is obvious that flight simulation (and flight "games") always attracted my attention.
I still remeber myself playing a Boeing 737 "simulator" on Commodore 16 (my first computer), and then Flight Simulator II, Aces, Red Arrows, Solo Flight and F-15 Strike Eagle on Commodore 64, then F/A-18 Interceptor, Fighter Bomber and Stealth Fighter on Amiga and then Falcon 3, Flight Simulator 4, Flight Unlimited and F-14 Fleet Defender on my first PC (a 386DX 40Mhz with 40 Megabytes hard disk!). Lots of fun.

In 1995, thanks to the financial and moral support of parents, I was lucky enough to get a Private Pilot Licence (now expired) at the local aeroclub flying on Aviamilano P.19, Socata TB9 Tampico, SIAI-205 and Piper PA-28 Arrow. Lots of fun.
By the way India-India-Alpha-Foxt-Echo is the plane on which I earned my "wings".

Also, after my engineering graduation, I've served as desk-flying Airman in the 46th Air Brigade of the Italian Air Force (military service was still compulsive in Italy at that time). I cannot say it was lots of fun but it has not been a bad year either. And I had the chance to see a lot of planes which was great.

Well, here we go. In this blog I will show you the progress of my flight simulator projects and share my thoughts about flight simulation and flight games in general.
Posted by ScimmiaSpaziale at 9:11 AM 1 comment: