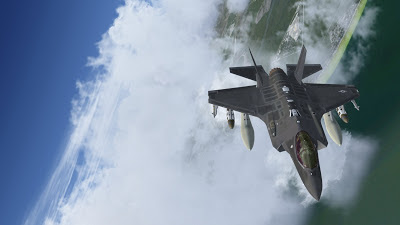 I have changed my plans and released the freeware F-35 before the F-14D... The reason is that the F-14D Beta need more work than I though to make it a more meaningful release, and, well, I am not in the right mood to go through the tedious process of writing the missing code right now.
On the other hand, I've made several minor updates to the F-35, and I prefer to release it now. So here we go.


Version 2.10 – FREEWARE RELEASE
December 30th 2012 – CHANGES FROM PREVIOUS VERSION:
NOTE: FROM THIS RELEASE (2.10) ONWARDS THE LICENCE IS CHANGED TO FREEWARE:USAGE IS FREE, AND YOU ARE NOW FREE TO COPY THIS SOFTWARE, HOWEVER ANY MODIFICATION OR ALTERATION OF THE FILES IS STILL PROHIBITED.

It can be downloaded from the link on the side bar. Will be uploaded to avsim later on. Have fun!
Posted by ScimmiaSpaziale at 12:04 AM 43 comments:

Ok, there is a small bug on version 2.30 which prevented keys 1,2 and 0 from the scratchpad to work properly... this was due to the compiler being configured for the new F-14.
So, I've released version 2.31 which you can download from my Google Drive by clicking on the link in the column aside.
In hindsight, I believe it is a much easier way for me to provide download links, and they are also easier to find for the visitors... so disregard my previous post: I will keep download links on the side column, at least until I change my mind again...
Posted by ScimmiaSpaziale at 12:09 AM 15 comments:

I have decided to consolidate all the download links of the lastest versions of my projects in this post.
This post will be constantly updated with download links to the lastest official releases, although I will continue to release them at both avsim and flightsim.

The T-45C Goshawk is a heavily modified version of the Bae Hawk single engine jet trainer,adapted to aircraft carrier operation and employed by United States Navy and Marine Corps as intermediate and advanced jet trainer, including carrier qualification mission.
This package contains an detailed external visual model,with self shadowing,bump mapping and hi-res textures, a detailed working virtual cockpit with 3D gauges for both pilot and instructor stations, a reasonably accurate flight model and various repaints including Centennial of Naval Aviation special colors.

Latest official version is 2.30, released on December 18th 2012 and can be downloaded from my Google Docs folder HERE

The file is not yet available anywhere else at the moment.

This project is not available for download at the moment, however a Public Beta release of version 2.00 is coming soon (hopefully before Chirstmas)... NOTE: All previous versions will not be supported

This project is not available for download at the moment, and was previously avaiable only as payware at SimMarket. It will be re-released as freeware in early 2013.
Posted by ScimmiaSpaziale at 1:44 AM 3 comments:

I am uploading the latest build of the T-45C Goshawk project for Flight Simulator:Acceleration as I write. File will be available on the public folder of my Google Drive and later on at Flightsim and Avsim as usual.
There are no major changes, just very minor fixes here and there. The main reason why you may want to download this is the new flight model, with a more realistic behaviour, courtesy of Tom Falley. Complete list of changes is here:

Also, I have deleted all the "download" pages on this blog. They will be consolidated in an unique (and permanent) download page where you can find all the latest official releases of my works.
The download link for the T-45C version 2.30 will posted there.

Posted by ScimmiaSpaziale at 12:37 AM 5 comments: 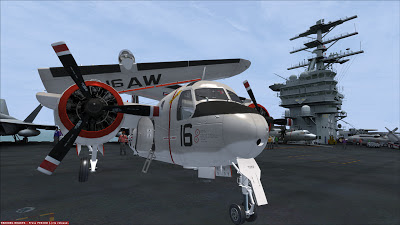 When I started this blog, apart from sharing updates on my work, I also wanted to share my impressions and findings about flight simulation, flight games and, from time to time, real aviation.
Now, as you probably know if you read my blog, I am always struggling to find the time to make some significant progress with my projects, not to say play FSX apart from flight testing my own creations. This is a shame because there are lots of wonderful freeware and payware add-ons that are truly worth downloading and spend some time with.

Lately, my favourite diversion from Tomcat test flights has been the Grumman S2F-3 Tracker for FSX (freeware). This is a FSX-native conversion from an FS2004 project by Milton Shupe, conversion done by Eagle Rotorcraft which also added FSX specific features like bump and specular mapping.

Let me spend few words to thank all the people involved in this project and specifically thank Milton Shupe for all the excellent aircrafts he delivered during all this years. I've always been impressed by the quality of his work and I still remember being completely blown away from his most excellent Howard 500 several years ago in FS2004.

The S2F-3 was the first purpose-built, single airframe Anti-Submarine Warfare aircraft to enter service with the U.S.Navy, serving from 1952 to 1976 (according to wikipedia). It also served in many air forces and navies around the world including my beloved Italian Air Force, and, after retirement, found a second life in the fire-bombing role.

As for this FSX rendition, the first thing to say is that the outer model is really great: excellent graphic quality with great attention to detail and a very good performance in terms of frame rate.
I am not a "rivet counter", nor an expert on this specific aircraft at all, but to my untrained eye it also seems very accurate in any detail I've examined. Well done.
Sound package is convincing, and although I cannot guarantee on its authenticity, it seems to fit very well to this type of aircraft.
A similar comment can be made on the flight model... I have not checked its performance against the real thing, but it seems believable for an aircraft of this kind and size - and it is fun to fly, which afterall is what matters most IMHO.
It is worth to note that carrier operations with the Tracker will present some specific challenges to people like me, which fly almost uniquely fast jets. Approach speeds are much slower, but so is the aircraft response  to your inputs, and then the flight model has a slight tendency to float. It took a little to me to get used to it: since its controls are not very reactive, especially on the roll-axis, you will not have many chances to correct mistakes during the approach. It requires special attention and it is lots of fun.

The weak point of the package, if I may say so, is the Virtual Cockpit, which is way above the average for a freeware plane, but not quite on par with some payware addons, but that's being really nitpicky since the VC it does its job quite nicely.

So, long story short, if you love naval aviation in FSX as much as I do, the Tracker is a must download. Great piece of freeware.

And by the way, also the Grumman E-1B Tracer, from the same authors, has been recently converted - I have not downloaded it yet...since I am sure it will slow down the development of my Tomcat significantly!

Homepage for the FSX (con)versions of both aicrafts is here:

P.S. Note that, to launch the aircraft from a carrier in Acceleration, you need to manually edit the aicraft.cfg and add this section:

Posted by ScimmiaSpaziale at 2:26 AM 6 comments: