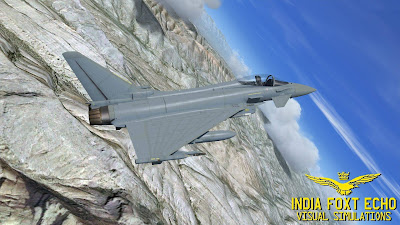 First, thanks a lot your your continued support to my projects - as you may know this has been a very special year for my flight simulation efforts, as I finally established my own registered "company". This is still just a hobby for me, but having proper fiscal organization allows me to invest more money and embark in more ambitious projects - the new F-35 is the first result of the new organization, and, for example, the new visual model is a direct outcome of my decisions. Making it a freeware project was simply not an option - development costs being way too high for freeware.

So, what is next? Here is the list of the projects currently on my drawing board:

NEW PROJECT - Eurofighter Typhoon:If you follow my Facebook page, you know that I have been doing some work on an Eurofighter model. The vast majority of the documentation on this aicraft is still classfied, but I believe I have enough information to create a decent simulation. I did some work on the external model (which is shown in the picture above) and the VC - and it looks good so far. I'll continue working on this to check if there are unforeseen showstoppers... but so far so good.
This is meant to be a payware project - and hopefully should land on the same quality level and price range of the F-35 (and possibly a little more accurate in terms of avionics). The main development platform will be P3Dv2.5 (for the moment...may be I'll move to V3) but it should be backward compatible to FSX (possibly with the exception of PIRATE/TFLIR imaging).

NEW PROJECT - Aermacchi MB.339 (ON HOLD)
An obvious extension of the MB.326 project, the MB.339 is one aicraft I still intend to do. I did some work on a preliminary external model - which needs texturing and a decent VC. One of the targets of this project is to achieve a very high visual efficiency in terms of frames-per-second. At present I have no time to work on this...and the project is on hold. In my intentions this would be a freeware project.

NEW PROJECT - Grumman E-2/C-2 (Feasibility stage - ON HOLD)
I also made a feasibility study on the E-2 and C-2 aicrafts - they are probably the only carrier aicrafts for which we do not have decent models... A payware project would be doable, although I do not have time for this right now.

PROJECT UPDATE - F-35 Lightning IINeedless to say, I am continuing to keep track of the bug reports and suggestions... as of today, we have not yet reached the critical mass to release another update...but if I'll find some time in the next few weeks I will update the project anway.

T-45C Goshawk - Although this project is officially closed, I have been using it as testbed for various things...so my private build is actually a little bit better than what you guys have... In particular there are a number of small visual improvements that some of you may like.

F-14D Tomcat - Still not happy with it. And as much as I appreciate Aerosoft's F-14X, I believe that a new, and better, Tomcat is possible.

S-3B Viking - Yes...I know. I promised an update for it a long time ago. It is still unfinished, and IMHO is the worst of the bunch in terms of quality. But still...may be one day or another I will find the will to complete it. Or at least release the AI tanker model...

MB.326 - Very few bugs reported... I am not completely happy with it, but I am not sure I will have much time for it.

So, looks like the 2016 will be quite busy... we'll see.
In the meantime thanks once again for your support, feedback and help...and BEST WISHES for a Merry Chirstmas and a Happy New Year!
Posted by ScimmiaSpaziale at 2:05 PM

Dino, the 35 was fun beta testing for sure. I love the final release and I am sure you will make tweaks as it rolls along. Please continue to do what you do when you can as I know we all have personal lives and other responsibilities to deal with. A nice Euro would be a welcome addition to the fighter community and my collection, there just really isn't a good one out here.

Thanks again for all you do and I look forward to the possibility of being on your test team for the Typhoon if or when it's that in the future.

All good Deano, you have given us more than we deserve. Have a good break from it all and just remember all your work is well appreciated.

it's too bad that I've moved to DCS 2.0 because I would love to test your Eurofighter!
At least they are making one for DCS as well, but I am sure it will not look as good as your's. Because they cannot have the Modelling Skills of the great Dino! :)

I've told you to make a Eurofighter when you still showed your first F-35 Model Pics - Why did you not listen to me then? :(

Best Regards and Merry Christmas to you, Dino!

Dino
Thanks - I think you did the right thing for your product
to go to next level and make it payware - and then focus on
a few models to lift them into high levels addon.

Please can you look at the Aermacchi M-346, a beautiful transonic aircraft aimed at the T-X program as the adavnced trainer for the F-22 and the F-35. A great step up from ythe T-45 Goshawk

So will the Eurofighter Typhoon also be a freeware eventually like the F-35 was?